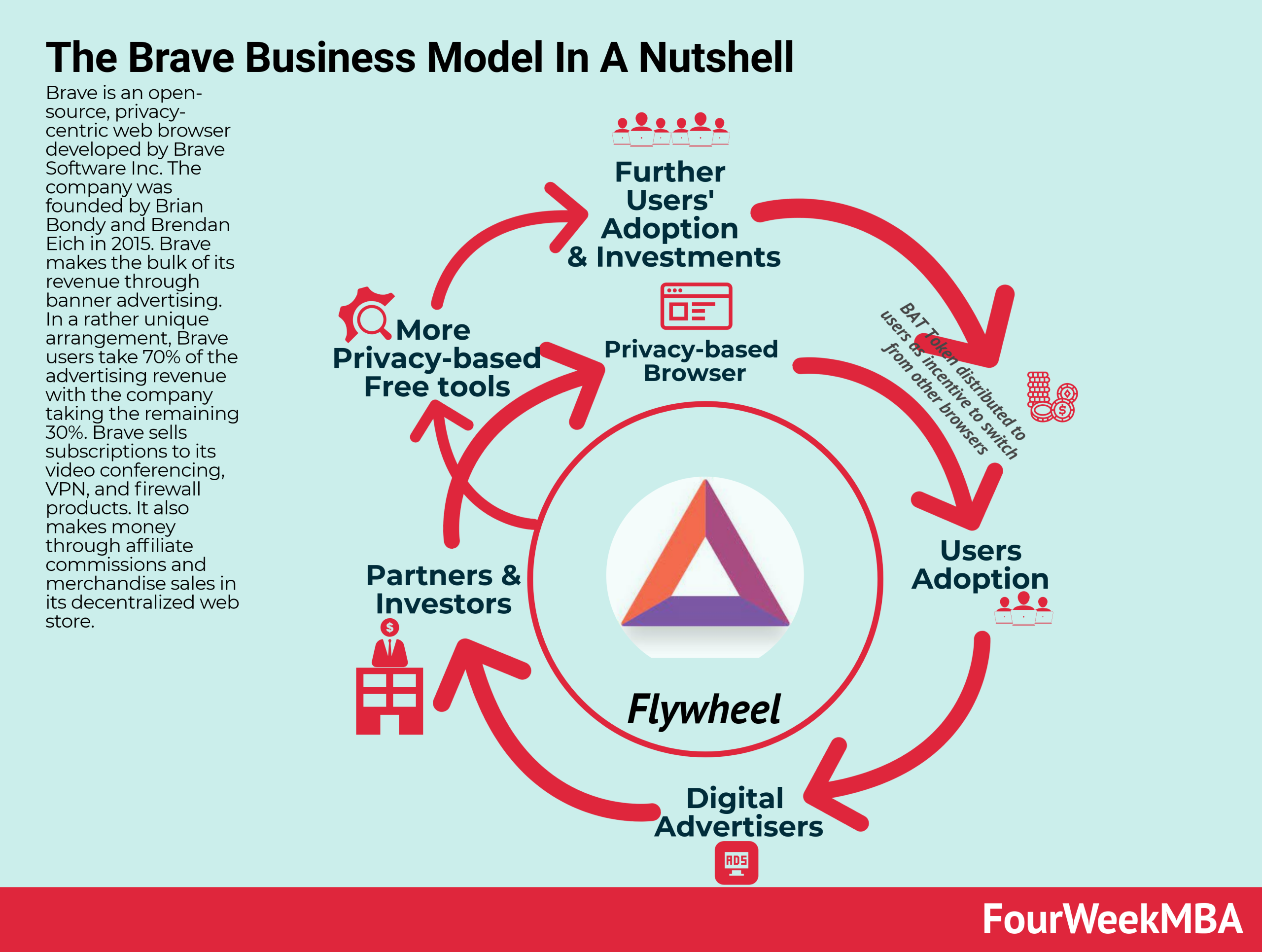 Brave is an open-source, privacy-centric web browser developed by Brave Software Inc. The company was founded by Brian Bondy and Brendan Eich in 2015. Brave makes the bulk of its revenue through banner advertising. In a rather unique arrangement, Brave users take 70% of the advertising revenue with the company taking the remaining 30%. Brave sells subscriptions to its video conferencing, VPN, and firewall products. It also makes money through affiliate commissions and merchandise sales in its decentralized web store.

Brave is an open-source web browser developed by Brave Software Inc. Like Google Chrome, Brave is based on the Chromium codebase.

Brave Software was founded in 2015 by Brian Bondy and Brendan Eich, with the first Brave Browser launched in January of the following year. Brave is privacy-centric, with the browser blocking ads by default and refraining from tracking cookies or collecting IP addresses. What’s more, Brave offers protection against malware and phishing scams.

In June 2018, the company released a pay-to-surf version of Brave. Initially, the browser came preloaded with around 250 advertisements. As the user surfed the internet, they sent a detailed browsing history log back to the company for the purpose of testing said functionality. They were also paid in Bitcoin, with the total amount reliant on how many ad impressions they’d received.

The growth of the browser stalled soon after the release of the Brave Payments service, where users receiving Bitcoin could send the currency directly to content publishers. This happened because users were reluctant to part with their hard-earned Bitcoin.

In 2017, the popularity of cryptocurrency skyrocketed with many holding Initial Coin Offerings (ICOs) to take advantage. Brave followed suit, raising $35 million in less than 30 seconds after launching its own currency called Basic Attention Token (BAT). To attract content creators to its platform, it handed out promotional BAT to YouTube and Twitch users on a first-come-first-served basis.

The following year, Brave grew its user base to around 5.5 million, with many joining the platform to escape Google’s pervasive privacy policies. The company then entered into multiple new partnerships, allowing Brave users to tip publishers on Twitter, Reddit, and Vimeo. A video conferencing tool was then developed in 2020 to take advantage of the surge in remote work.

Perhaps the most significant announcement from the company to date came in March 2021. After acquiring the creators behind the open-source search engine Tailcat, Brave launched its own search engine in June and replaced Google as the default option four months later.

Following is a general description of each.

The majority of company revenue comes from banner advertising served to Brave users.

Users who opt to receive ads while browsing take 70% of the ad revenue Brave receives from advertisers. As stated earlier, this is paid in the form of BAT.

Brave then collects the remaining 30%.

In addition to its browser, Brave also offers ancillary products and services including a firewall, VPN, and video conferencing.

For use of its firewall and VPN services, the company charges $9.99 per month or $99.99 per year. The video conferencing tool, Brave Talk, is free to use. But users are charged $7.99 per month if they desire premium features.

Users can purchase various cryptocurrencies through the browser and the company also has a dedicated deals page called Brave Offers. The page offers heavily discounted products, ranging from smart televisions to online courses.

In both cases, the company receives a portion of the total sales price. Some partnerships with cryptocurrency exchanges also allow the company to be compensated for repeat purchases.

Brave also sells physical and digital products through its Swag Store. Most of the items for sale are token-branded merchandise and include jackets, hoodies, children’s apparel, socks, stickers, and hats.

Like the Brave browser, Swag Store is decentralized. It runs on a peer-to-peer distributed file system with zero tracking cookies or scripts.

Read Next: BAT Token: The Basic Attention Token Business Model In A Nutshell