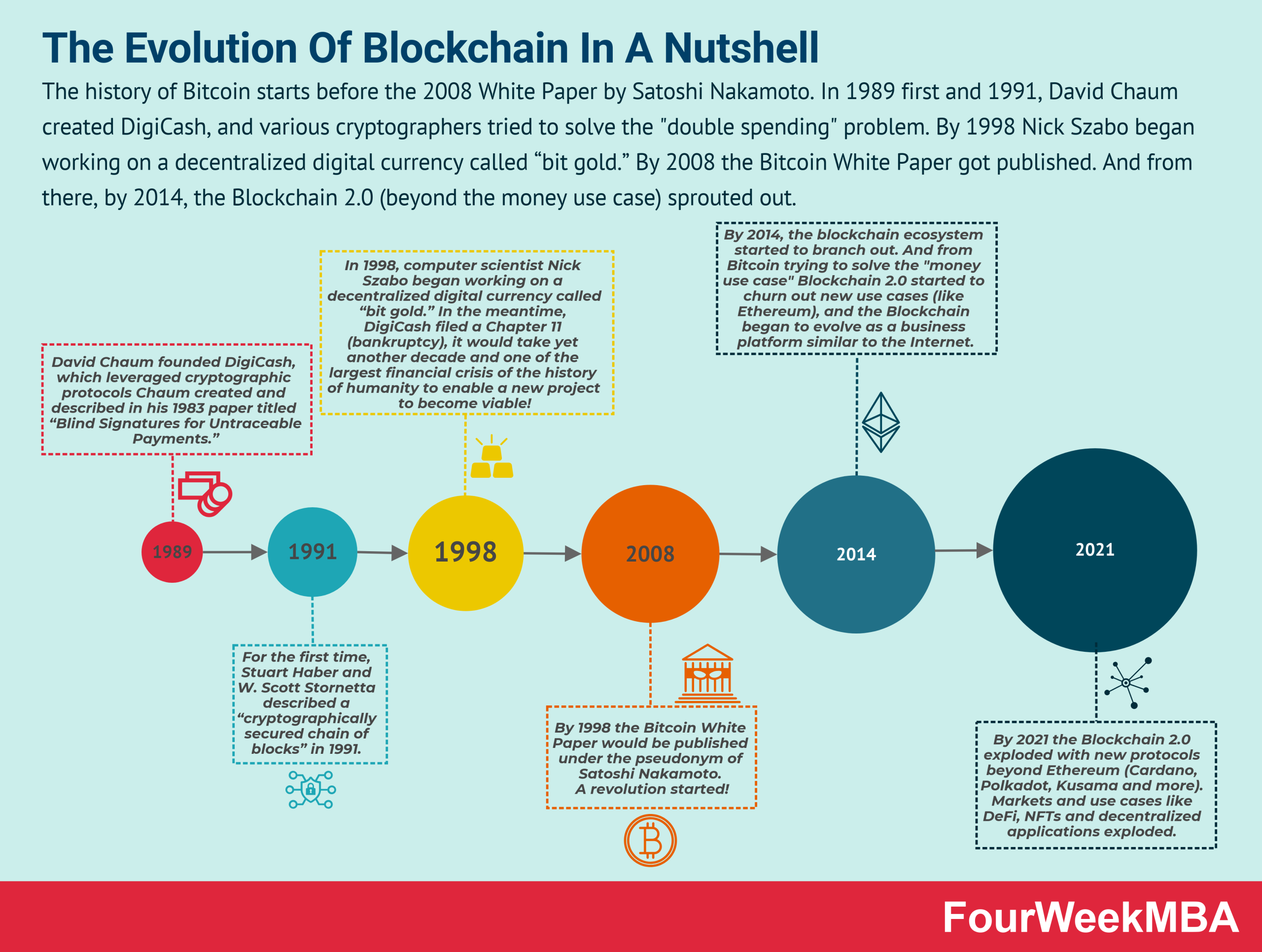 The history of Bitcoin starts before the 2008 White Paper by Satoshi Nakamoto. In 1989 first and 1991, David Chaum created DigiCash, and various cryptographers tried to solve the “double spending” problem. By 1998 Nick Szabo began working on a decentralized digital currency called “bit gold.” By 2008 the Bitcoin White Paper got published. And from there, by 2014, the Blockchain 2.0 (beyond the money use case) sprouted out.

1989 marks the very first form of anonymous transactions through cryptographic protocols with DigiCash. Founded by David Chaum, DigiCash used the cryptographic protocols Chaum created and described in his 1983 paper titled “Blind Signatures for Untraceable Payments.” These protocols closely resembled the cryptography still in use today with both public and private keys for transactions similar to the public and private keys Bitcoin uses.

For the first time, Stuart Haber and W. Scott Stornetta described a “cryptographically secured chain of blocks” in 1991.

In 1998, computer scientist Nick Szabo began working on a decentralized digital currency called “bit gold.” Later on, he coined the term “God Protocols” to refer to the concept of a set of computer protocols capable of arbitrating and facilitating private, seamless, and unbiased value exchanges involving two or more independent parties.

In 2008, a white paper containing a blockchain model was released and published by a developer, or developers going by Satoshi Nakamoto’s pseudonym.

Satoshi Nakamoto developed Bitcoin as a currency that allows peer-to-peer transactions and eliminates the necessity for a central bank or other intermediaries in operating and maintaining the ledger.

Although not the first of its kind, Bitcoin is considered the most successful version of online currency as its technology solved long-standing problems in the crypto field.

Aside from Satoshi Nakamoto, as we saw, another notable personality in the development of blockchain and cryptography is David Chaum. Apart from pioneering cryptography and privacy-preserving technologies, the invention of digital cash also gets attributed to David Chaum.

David Chaum’s 1982 dissertation is the first blockchain protocol proposal ever known. “Computer Systems Established, Maintained, and Trusted by Mutually Suspicious Groups” contained all but one vital element of the blockchain protocol, which received elaboration in Bitcoin’s whitepaper.

The year after the release of a white paper, Satoshi Nakamoto developed the first blockchain in the form of a public ledger for transactions using Bitcoin was implemented in 2009.

Developers began searching for other applications of blockchain technology beyond currencies. Hence, the birth of Blockchain 2.0, an era of exploration for blockchain’s potential in other financial, inter-organizational transactions apart from currency.

Monero, the ultimate privacy coin, was also released in 2014 on April 18th.

Shortly after introducing smart contracts, the Ethereum network released on July 30, 2015. Its initial release included 72 million coins with the first trade valuing a single coin at $2.77 USD. However, this value quickly fell the very next day to $0.81.

In 2015, Coinbase also became the first U.S. bitcoin exchange to open after receiving a $75 million investment. Since then, Coinbase has grown into the largest cryptocurrency exchange in the United States.

With 2017 came some exciting altcoins looking to solve existing problems in the crypto space. First, there was Bitcoin Cash which was released in August. It aimed to reduce the volatility of transaction fees that were plaguing the Bitcoin network by increasing the maximum block size. This reduces the cost of a transaction by allowing larger blocks of data to transfer with a single transaction.

Next came the release of Cardano in September. Cardano differentiates itself through its heavily researched and peer-reviewed whitepaper helping to establish credibility for smart contracts built on the network. The creators of Cardano even established an organization dedicated to research related to blockchain and cryptocurrencies called IOHK. Cardano’s strong documentation and research-based approach make it a great solution for building decentralized apps and smart contracts.

2017 also saw the first hard fork of Ethereum with the Byzantium hard fork aimed to improve the privacy, security, and scalability of Ethereum as a whole.

At the same time as these impressive projects launched, bitcoin reached a major milestone. One bitcoin became worth more than one ounce of gold. While looking back this may not seem like a major feat, at the time it solidified that Bitcoin provided real value that could not be ignored.

Based on a whitepaper created in 2017, EOS.io first released in June by Block.one. It aims to nearly eliminate transaction fees that still cause difficulties in the widespread adoption of cryptocurrencies. EOS.io also set out to make their platform extremely easy for other developers to work with. They created extensive documentation on working with their platform as well as training courses and certifications specific to their platform.

As Bitcoin successfully created a blockchain-based form of currency, developers began separating blockchain from currency and started exploring other use cases for such technology.

Although blockchain was not exhumed from currency as several other “altcoins” began building on the blockchain technology, there were genuinely different blockchain applications developed.

This is an extract from Blockchain Business Models

Ethereum Vs. Bitcoin: What Are The Key Differences?

Bitcoin and Ethereum are both blockchain protocols. Bitcoin was initially thought to solve the money use case, where the blockchain...