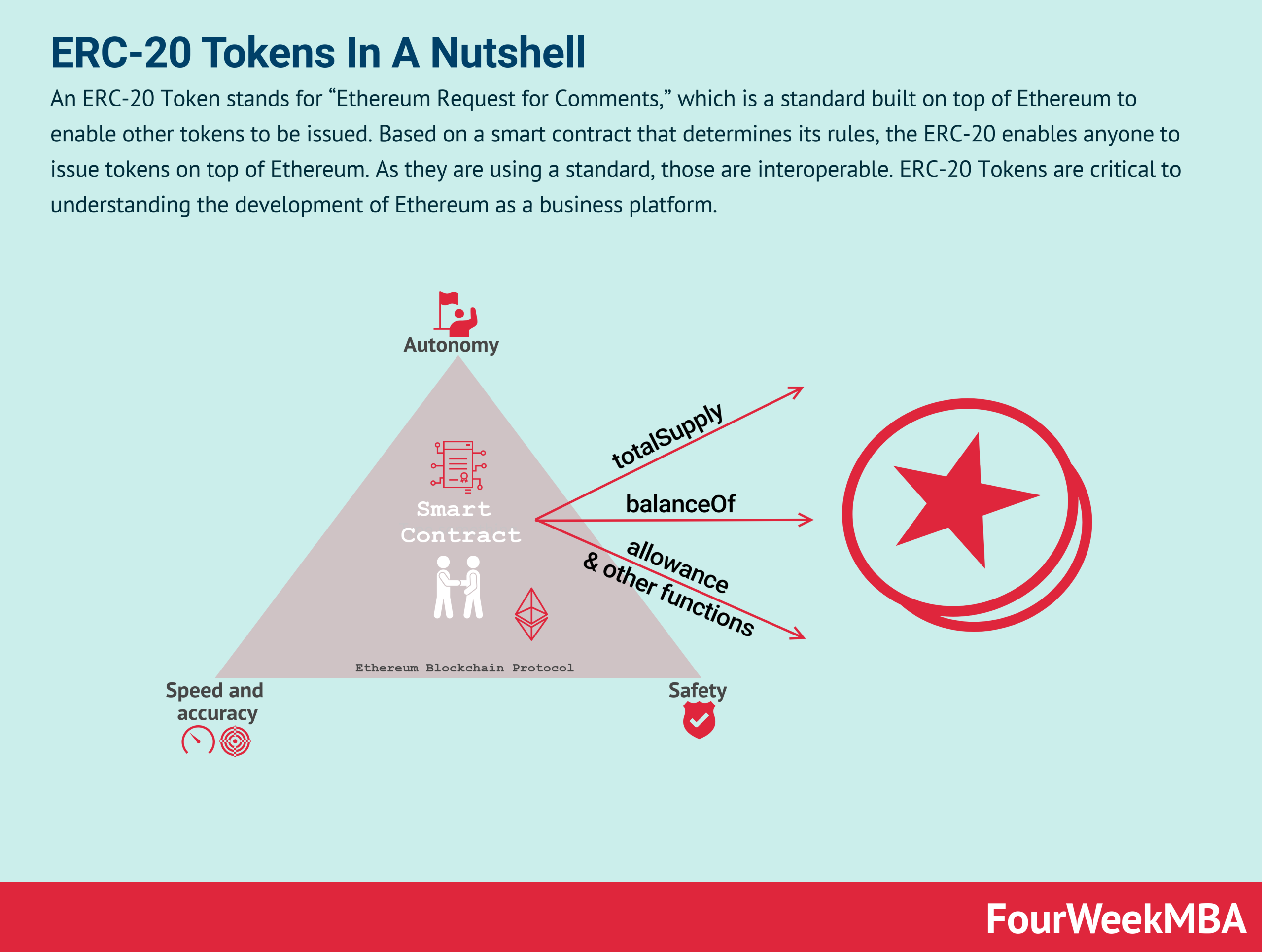 An ERC-20 Token stands for “Ethereum Request for Comments,” which is a standard built on top of Ethereum to enable other tokens to be issued. Based on a smart contract that determines its rules, the ERC-20 enables anyone to issue tokens on top of Ethereum. As they are using a standard, those are interoperable. ERC-20 Tokens are critical to understanding the development of Ethereum as a business platform.

Deep dive into the ERC-20 Token

Building up a protocol from scratch and making it work seamlessly is not a simple feat. That makes other blockchain-based projects leverage on existing protocols rather than building them from scratch. Ethereum is one of the most picked up protocols by new projects coming along, and for instance as of April 2021 more than three hundred thousand ethereum token contracts had been built by leveraging the Ethereum’s blockchain.

Thus, dApps leverage smart contract (as highlighted by the Ethereum foundation “a smart contract is code that lives on the Ethereum blockchain and runs exactly as programmed. Once they are deployed on the network you can’t change them. Dapps can be decentralized because they are controlled by the logic written into the contract, not an individual or company. This also means you need to design your contracts very carefully and test them thoroughly.”).

Another key application of Ethereum, as we saw, is the DAO or the ability to run autonomous organizations, where there is no single person in charge, but rather pieces of code run on top of the blockchain to execute commands based on consensus algorithms, usings tokens as a voting mechanism.

Let’s explore now another case, which will interest us in the next section. Building up a viable and scalable protocol from scratch isn’t a simple feat, and Ethereum was among the first to build a protocol with the sole purpose of “hosting” other applications and networks. Thus, a real “Blockchain Platform.”

ERC stands for “Ethereum Request for Comments” which is the standard to create your own token on top of Ethereum.

To gain a bit of context, as of May 2021, most of the tokens out there are Ethereum-based. In short, those are the ERC-20 type (representing a fungible, exchangeable note). Indeed, as of May 2021 almost four hundred thousand ERC-20 tokens exist on top of Ethereum. Many of those tokens have reached a market cap of dozens of billions.

It’s important to note that anything on Ethereum is expressed on a token. Indeed, a token doesn’t just represent an exchange of currency, a token can be used to assign reputation points on a platform, assign lottery tickets, as attribution/ownership in a financial asset (just like shares), a fiat currency and much more.

Therefore, the ERC-20 enabling the “tokenization” on top of Ethereum represents a “standard – which – allows developers to build token applications that are interoperable with other products and services” or in short a standard for fundible tokens.

This is critical, as otherwise, and before the ERC-20 standard was born, anyone that wanted to create a token had to do it from scratch (which means they had to code an entire blockchain protocol in the first place) and with custom built code. Thus, lacking interoperability at all.

Instead, with the ERC-20, thousands of tokens have been created on top of Ethereum and going forward those are interoperable, giving space to powerful network effects on top of the main blockchain.

Simply put, a token can be created as part of a smart contract which contains the rules to create tokens, manage these tokens and therefore anything that happens within.

This is an extract from Blockchain Business Models