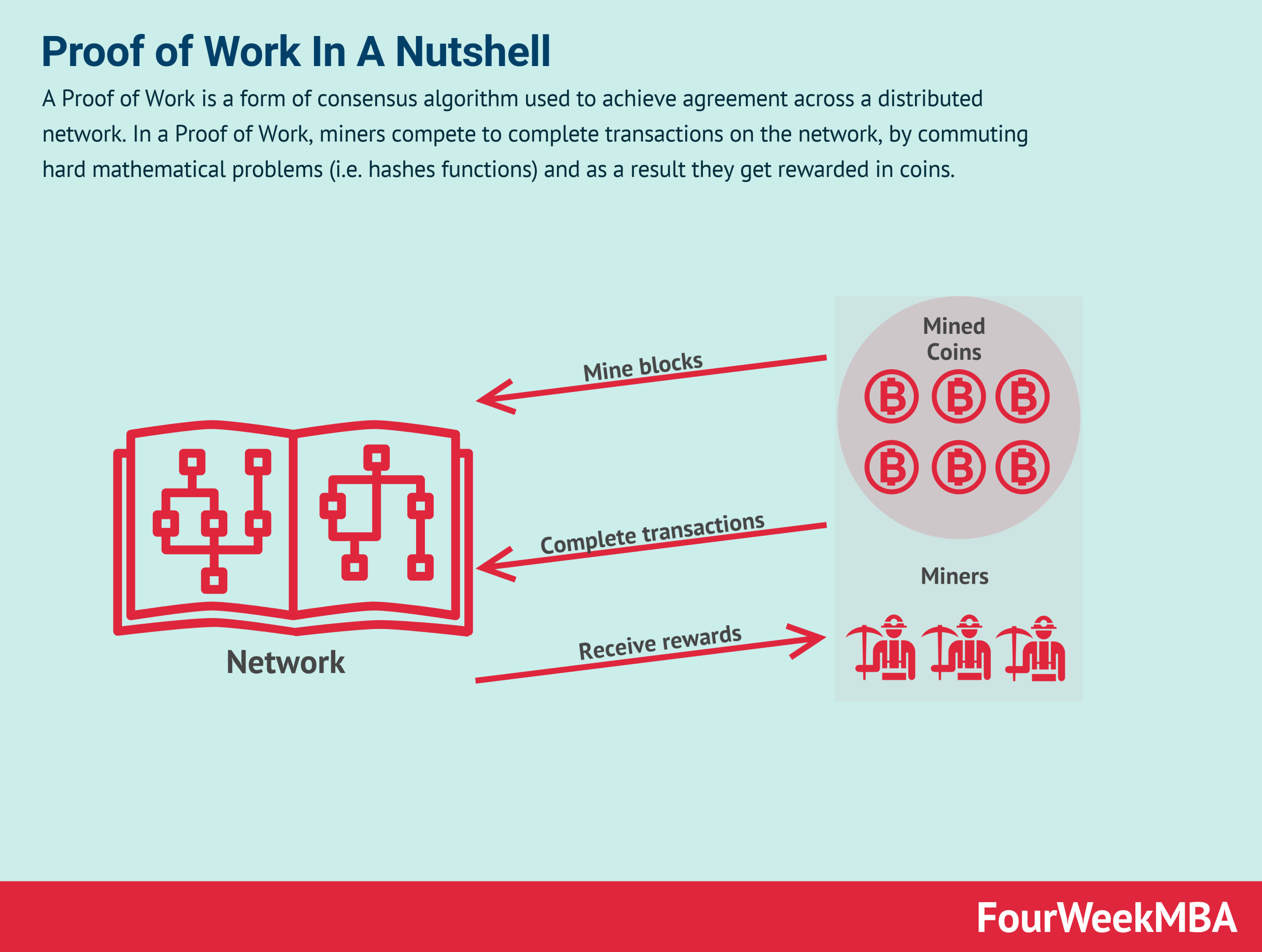 A Proof of Work is a form of consensus algorithm used to achieve agreement across a distributed network. In a Proof of Work, miners compete to complete transactions on the network, by commuting hard mathematical problems (i.e. hashes functions) and as a result they get rewarded in coins.

Proof of Work in a nutshell

As Ethereum points out, “in proof of work (PoW) based public blockchains (e.g. Bitcoin and the current implementation of Ethereum), the algorithm rewards participants who solve cryptographic puzzles in order to validate transactions and create new blocks (i.e. mining).”

Proof of Work explained in the original Bitcoin‘s White Paper:

The network timestamps transactions by hashing them into an ongoing chain of hash-based proof-of-work, forming a record that cannot be changed without redoing the proof-of-work.

As the White Paper explains, the several steps to run the network are:

1)  New transactions are broadcast to all nodes.

2)  Each node collects new transactions into a block.

3)  Each node works on finding a difficult proof-of-work for its block.

4)  When a node finds a proof-of-work, it broadcasts the block to all nodes.

5)  Nodes accept the block only if all transactions in it are valid and not already spent.

6)  Nodes express their acceptance of the block by working on creating the next block in thechain, using the hash of the accepted block as the previous hash.

The longest chain wins. When new proof-of-work are found, and a branch becomes longer, all the other nodes converge into the lowest blocks.

January 10th, 2009, a guy named Satoshi Nakamoto (it was only a pseudonym) sent an email to Hal Finney, a man from Santa Barbara:

“Normally I would keep the symbols in, but they increased the size of the EXE from 6.5MB to 50MB so I just couldn’t justify not stripping them. I guess I made the wrong decision, at least for this early version.

I’m kind of surprised there was a crash, I’ve tested heavily and haven’t had an outright exception for a while. Come to think of it; there isn’t even an exception print at the end of debug.log. I’ve been testing on XP SP2, maybe SP3 is something.

I’ve attached bitcoin.exe with symbols. (gcc symbols for gdb, if you’re using MSVC I can send you an MSVC build with symbols)

Thanks for your help!”

The subject of the email was Crash in bitcoin 0.1.0. That man, Satoshi Nakamoto was explaining to Hal Finney how to use a Bitcoin.

There are several types of Proof of Work. From hash functions to puzzles (cryptograms), sequences, hard inversions and many others. The key aspect here is in order for blocks to be validated computers mining to confirm transitions and produce new blocks. As those miners competing with each others, add blocks to the chain, as result they earn rewards (coins).

The whole point of Proof of Work, just like in the Proof of Stake is about enabling consensus in a distributed network.

Where Proof of Stake validates the network’s blocks based on proved stake of the validators.

In a Proof of Work, miners, pool up to generate coins for the network by solving harder and harder mathematical problems, and as a reward they get coins.

Advantages of Proof of Work

However, it has some drawbacks.

Some of the drawbacks of proof of work are:

The Bitcoin still works with a Proof of Work consensus algorithm, where Ethereum, for instance, is transitioning toward Proof of Stake.

Cryptocurrencies are serving as incredible lab for those various consensus algorithms and all the other systems built on top of them to be tested, validated and determined whether they can work at larger and larger scale.