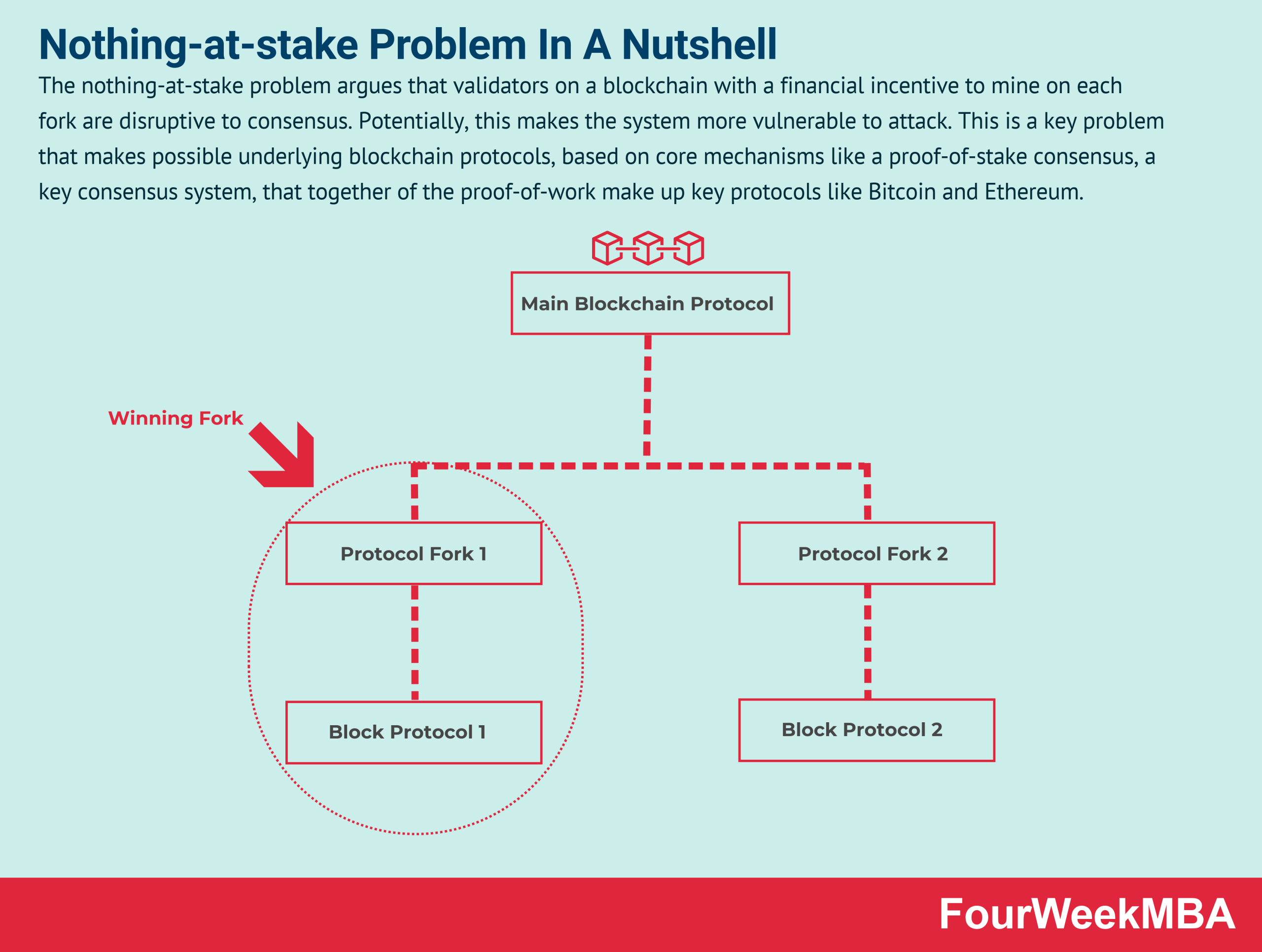 The nothing-at-stake problem argues that validators on a blockchain with a financial incentive to mine on each fork are disruptive to consensus. Potentially, this makes the system more vulnerable to attack. This is a key problem that makes possible underlying blockchain protocols, based on core mechanisms like a proof-of-stake consensus, a key consensus system, that together of the proof-of-work make up key protocols like Bitcoin and Ethereum.

This issue can be explained by noting that block creators on these systems do not have anything at stake when the network forks. When a network such as Bitcoin forks, active miners are incentivized to use the Consensus Method to choose one chain.

Since a mining unit cannot create blocks on both chains simultaneously, the fork is theoretically forced to resolve itself because of a scarcity of hash power. However, the reality of a Proof-of-Stake (PoS) protocol is rather different.

Instead of hash power, token stake is the scarce block production resource. Participants deposit tokens into a pool from which a “winner” is selected to propose the next block.

However, forks sometimes occur because of malicious transaction reversal attempts. In some instances, two winners from the original pool are selected.

In an ideal world, participants would choose only one of the two chains. But many miners choose both forks because the original deposit is valid on both chains. That is, it costs the miner nothing more to validate on both chains and collect the subsequent transaction fees and rewards.

The nothing-at-stake problem and opportunity cost

Opportunity cost can be used to explain the behavior of a miner and how it contributes to the nothing-at-stake problem.

In general terms, the miner can follow both chains indefinitely without any cost. In fact, this is the optimal strategy. If the miner chooses one chain, he or she risks losing the transaction fees from the orphaned chain.

If the miner chooses both, he or she has to do nothing more than wait for one chain to become the winner. The rewards, of course, are collected either way.

The opportunity cost here is much different from the costs associated with quitting a job, for example. A person that decides to quit their job may miss out on an impending pay rise or bonus. Proof-of-stake effectively allows that person to have two full-time jobs at no expense. If they don’t get promoted in the first job, they will in the second. There is nothing to lose, which gives the nothing-at-stake problem its name.

Ramifications of the nothing-at-stake problem

The nothing-at-stake problem is similar to the tragedy of the commons, an economic theory arguing that individuals who act in their self-interest neglect the well-being of society.

When a miner chooses both chains to maximize their returns, the integrity of each chain and the network as a whole is compromised. A malicious actor can intentionally fork the chain and double-spend tokens in a very subtle and covert way.

First, the actor continues to validate on both chains like everyone else. Then, they wait for confirmation of a bad transaction and stop validating on the first chain. The balance of voting power then shifts and the second chain begins to outpace the original. Eventually, the chain with the bad transaction becomes accepted officially while the first is orphaned.