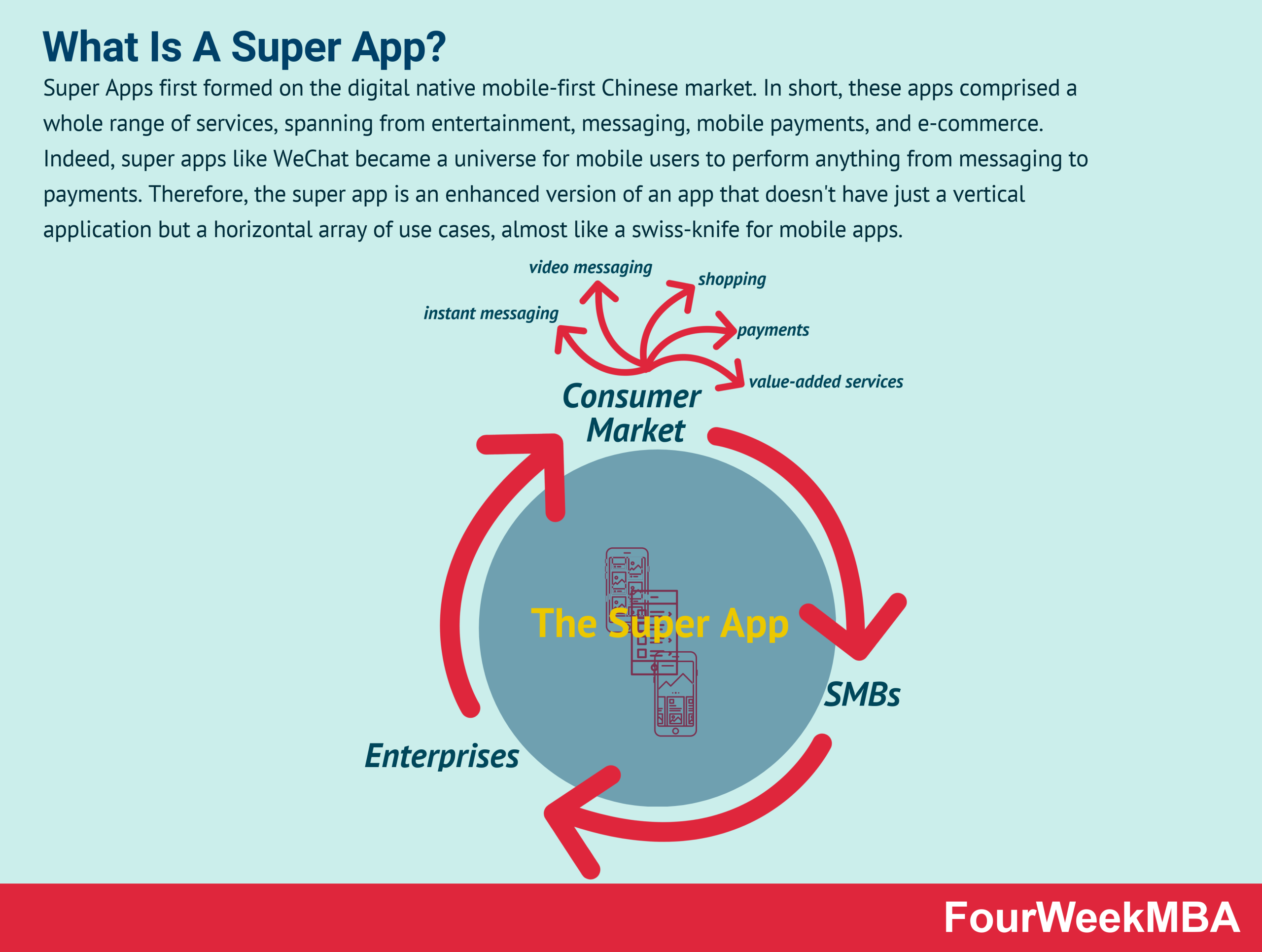 Super Apps first formed on the digital native mobile-first Chinese market. In short, these apps comprised a whole range of services, spanning from entertainment, messaging, mobile payments, and e-commerce. Indeed, super apps like WeChat became a universe for mobile users to perform anything from messaging to payments. Therefore, the super app is an enhanced version of an app that doesn’t have just a vertical application but a horizontal array of use cases, almost like a swiss-knife for mobile apps.

The Internet ecosystem in China really scaled around the years 2000s, and most of the population started to join in around the 2010s.

This has made the Chinese market extremely well versed for mobile-based applications. Therefore, in a western market, that evolved and scaled primarily through desktop computing, and where the transition to mobile is still going on. China was a native mobile digital player. That made it much easier for the Chinese market to become the hotbed to various mobile-based business models.

Mobile apps take off like crazy and they spend more time online than other consumers in other countries. They contribute more. They post more. They add content more. So it just turns out they are some of the world’s most enthusiastic netizens are Chinese. That wasn’t necessarily predictable but it’s true.

The Chinese digital market then is so different from the Western counterpart, which is hard to imagine. Indeed, as Jeffrey Towson highlighted in the same interview:

One of the things that were different early on was people don’t use email. I mean you send an email to someone in China, you better wait a week because they’re probably not going to check their email. It was all about messaging. So it started out with messaging with QQ (an instant messaging software part of Tencent) and that led to WeChat.

Therefore, instant messaging, like WeChat really started early own as powerful commercial use cases for the consumer Chinese market. From there, as those apps quickly scaled up, more and more features got added. From, mobile payments, to e-commerce, these apps really became a Universe of possibilities for people.

Another key difference to appreciate why in the Western world we didn’t see before Super Apps are also, and again peculiar to the Chinese market. Indeed, where US companies, like Facebook had to move very fast in conquering their vertical markets (in Facebook and its other products like Instangram and WhatsApp these were social media and instant messaging), thus they remained constrained to a fewer, more restricted markets.

Thus, Facebook and Google perhaps took respectively a decade and two to move to other markets. For Chinese companies, as outside competition was reduced by the Government intervention, and massive tech monopolies were incentivised, it was possible to move the expansion of these application horizontally.

Therefore, not just entertainment but also shoppiong and payments.

Indeed, in the US, as the same companies that just a few years ago managed to monopolize their markets only there they started to use the “Super App” strategy. In fact, as a monopolist it was now possible to scale horizontally.

That is why Western tech companies took notice and started to emulate this model, as Towson highlighted:

What’s the next Super App? WhatsApp vs. WeChat case study

A great example of that is WeChat, part of Taobao, within the tech conglomerate Tencent.