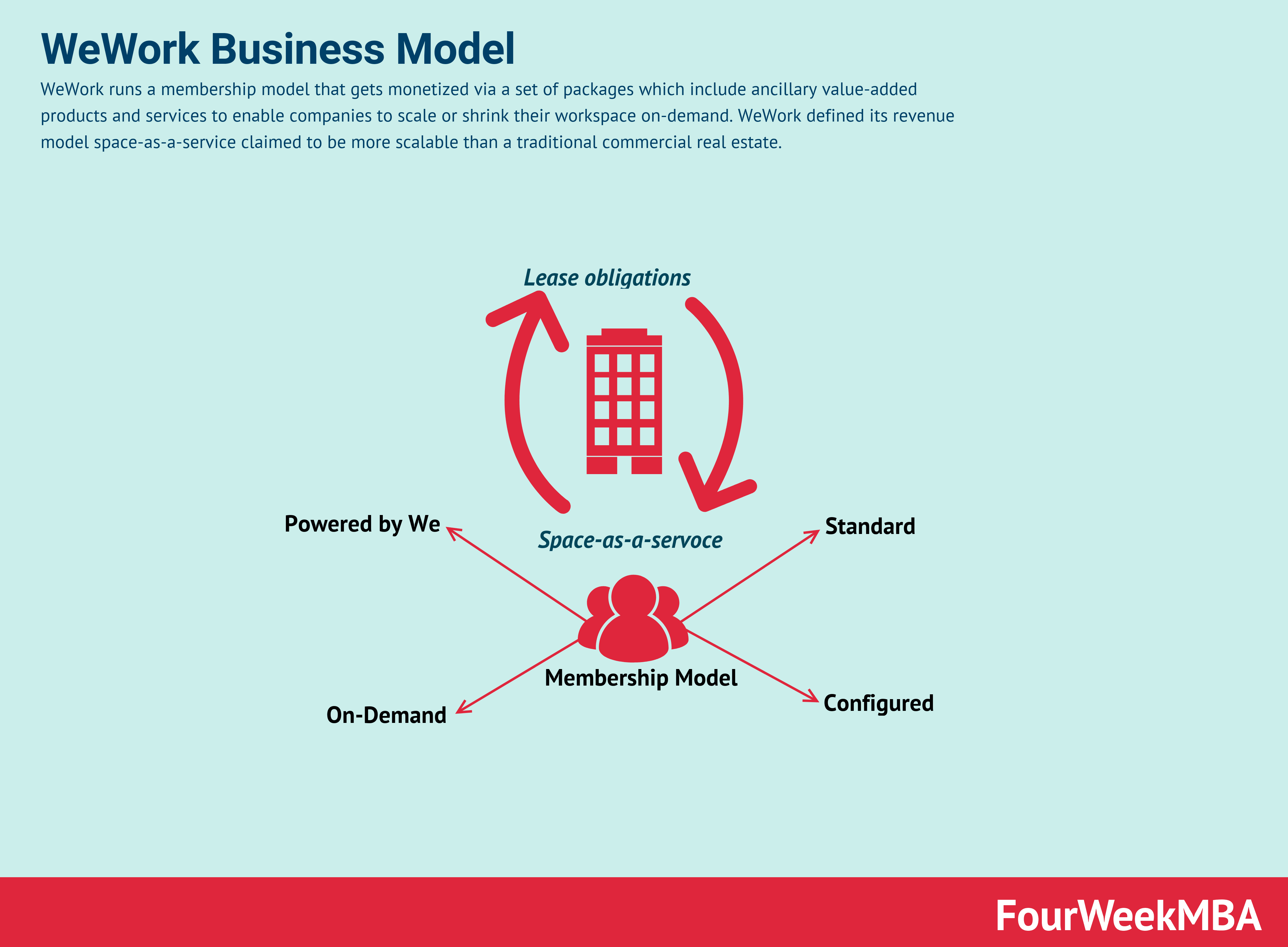 WeWork runs a membership model that gets monetized via a set of packages which include ancillary value-added products and services to enable companies to scale or shrink their workspace on-demand. WeWork defined its revenue model space-as-a-service claimed to be more scalable than a traditional commercial real estate.

Let’s see what it all means, to make sense of it.

What macro trends made WeWork possible?

In its financial prospectus WeWork mentions a few macro-trends that helped WeWork scale:

The thesis behind the WeWork business model is that if it manages to create a commercial real estate platform that connects the demand of office spaces, related services, and additional products, with the supply. That platform will capture value a fraction of the market in the form of subscription revenue.

But how big is that market?

According to WeWork, the total addressable market opportunity is valued at around $1.6 trillion.

The competitor strength of the offering according to WeWork claims is the ability to deliver its members lower prices, compared to existing alternatives, and the fact that overall members joining WeWork spaces will save money as they scale.

In its S-1 form (which gets submitted when company are about to IPO) WeWork highlighted:

Nine years ago, we had a mission to create a world where people work to make a life, not just a living. We believed that if we created a community that helped people live life with purpose, we could have a meaningful impact on the world. From the moment we started, we had conviction that there was an entrepreneurial spirit that was underserved. We knew there were creators all around the world who were looking for a better workplace solution at a lower price.

We envision a future in which our global platform is a one-stop shop where members have access to all of the products and services they need to enable them to work, live and grow.

Three concepts that jump right away from the articulation of WeWork vision based on what the company tries to emphasize to public investors:

As WeWork highlighted in its financial statements:

Our global platform provides members with flexible access to beautiful spaces, a culture of inclusivity and the energy of an inspired community, all connected by our extensive technology infrastructure.

In general, a platform business model has to have a high component of network effects, leveraged by proprietary algorithms, and technologies. While WeWork does use advanced technologies in some of the services it offers, to organize the spaces around which its services are offered, it’s hard to call the company a platform.

WeWork also emphasizes itself as a community-building company that might leverage data and technology, rather than just a real estate company.

As WeWork explained further in its financial statements:

We have begun to build a suite of We Company offerings and develop a network of third-party partners to address our members’ needs.

With the support of our global footprint, our partners are presented with a unique opportunity to reach new customers and efficiently expand their businesses to new markets. While we are in the early stages of our platform journey, we are excited by the initial results and inspired by the potential.

The company highlights how the physical spaces are just a foundation to a business model that leverages on community building and a set of services for companies part of their network:

Our physical spaces are the foundation of our global platform and allow us to deliver differentiated products and services as we scale, further realizing our vision to deliver a better day at work for less.

Where the commercial real estate model has pretty much focused on collecting rents from tenants, with a small part related to common area maintenance fees.

The space as a service (SPaaS) model introduces a set of products and services that makes space rented only the foundation of the whole model. Indeed, with space, this membership model leverages on several elements such as:

In other words, beyond the physical locations offered by the company, WeWork also offers a set of services meant to enable members to scale their teams.

Thus, WeWork presumably leverages technology to build a platform able to offer a set of services to deliver what the company claims as “a premium experience to our members at a lower price relative to traditional alternatives.”

Thus, the core of the revenue model is a membership, and on top of that a set of ancillary, value-added products and services.

Once again, while it’s legitimate to come up with new revenue generation strategies, and while technology enables us to transform into services (through automation, and scale of the service delivery) it’s hard to prove that WeWork claimed Space-as-a-service platform is a platform at all.

We have created a powerful ecosystem and brand that not only benefit our members and partners, but also result in landlords, neighborhoods and cities all benefiting from shared value creation, or what we call the “WeWork effect”.

That can be summarized as the value proposition for several key customers of WeWork.

As the company highlights its “ecosystem landlords” see their assets increase in value.

How does WeWork lose money and burn cash?

The majority of WeWork revenues come from recurring monthly membership fees, that as of June 2019 accounted for 83% of the total revenues.

An additional 12% came from additional products and services offered by the company to its members.

And a remaining 5% comes from a few additional services on top of the membership (conference rooms,, printing credits, and commissions of the sale)

The net losses seem to accelerate throughout 2019. If we look at the expenses, most of them are due to location operating expenses.

As the company highlights those are “Location operating expenses are our largest category of expenses and represent the costs associated with servicing members at our locations.”

Any company needs a set of services or costs which are necessary to make the sale. For instance, Google needs to acquire traffic before it can even sell its advertising. That is why understanding Google TAC is extremely important to have a grasp of the Google business model.

When it comes to WeWork the key expenses to make the sale, which in its case means selling its membership are the location operating expenses.

Those comprise things like the community that includes a dedicated member responsible for filling spaces after a location reaches maturity.

It also includes the support functions directly attributable to the operation of these locations, such as costs associated with billings, collections, purchasing, accounts payable functions and member technology.

Simply put that is the cost of sales or the necessary cost to run these locations for the members. In short, without these expenses, the membership sale would not be valuable enough to be justified.

The company is also a cash flow negative.

In part, this is based on how the business model of WE works. The company has to “anticipate” cash in lease obligations to guarantee the space available to its members, which will be amortized over the years.

On the left side, you have the pre-opening locations (find, sign, build) which represent the “investments” WeWork made to scale (they don’t make money yet).

On the right side (fill, run) you have the open locations where WeWork makes money and operates primarily through its membership revenue model.

In order to improve the stability of its membership base, WeWork managed to onboard enterprise customers, which by June 2019 made up 40% of the memberships.

Understanding value from the perspective of venture capital vs. public markets

Public markets instead, depending on the timing of the IPO might value several things. This is not to say that public markets don’t value growth or scale. They do. However, markets are comprised of “strong hands” or investors that can move large quantities of money that might be looking for more speculative or more conservative business models depending on the timing.

In other words, wherein a venture capital context, ambition in the ability to capture as much value as possible, is valued at a high multiple, compared to the fact that the company which is scaling might be burning cash.

In public markets, there is a more complex logic to take into account. Thus, the WeWork withdrawn IPO can help understand how a company that has been seemingly successful in the private market, can miserably fail in a public context when the timing isn’t right and public markets are not willing to give credibility to business models which have not proved viable from the bottom-line standpoint.

In those cases, strengthening the financial position of a business (drastically reduce debt) is critical to be ready for the public market test.

Is WeWork a viable business model?

It’s not for several reasons:

How Does Grammarly Make Money? Grammarly Business Model In A Nutshell

Grammarly leverages on a freemium service, where free users are prompted to switch to a paid subscription. Grammarly makes money...