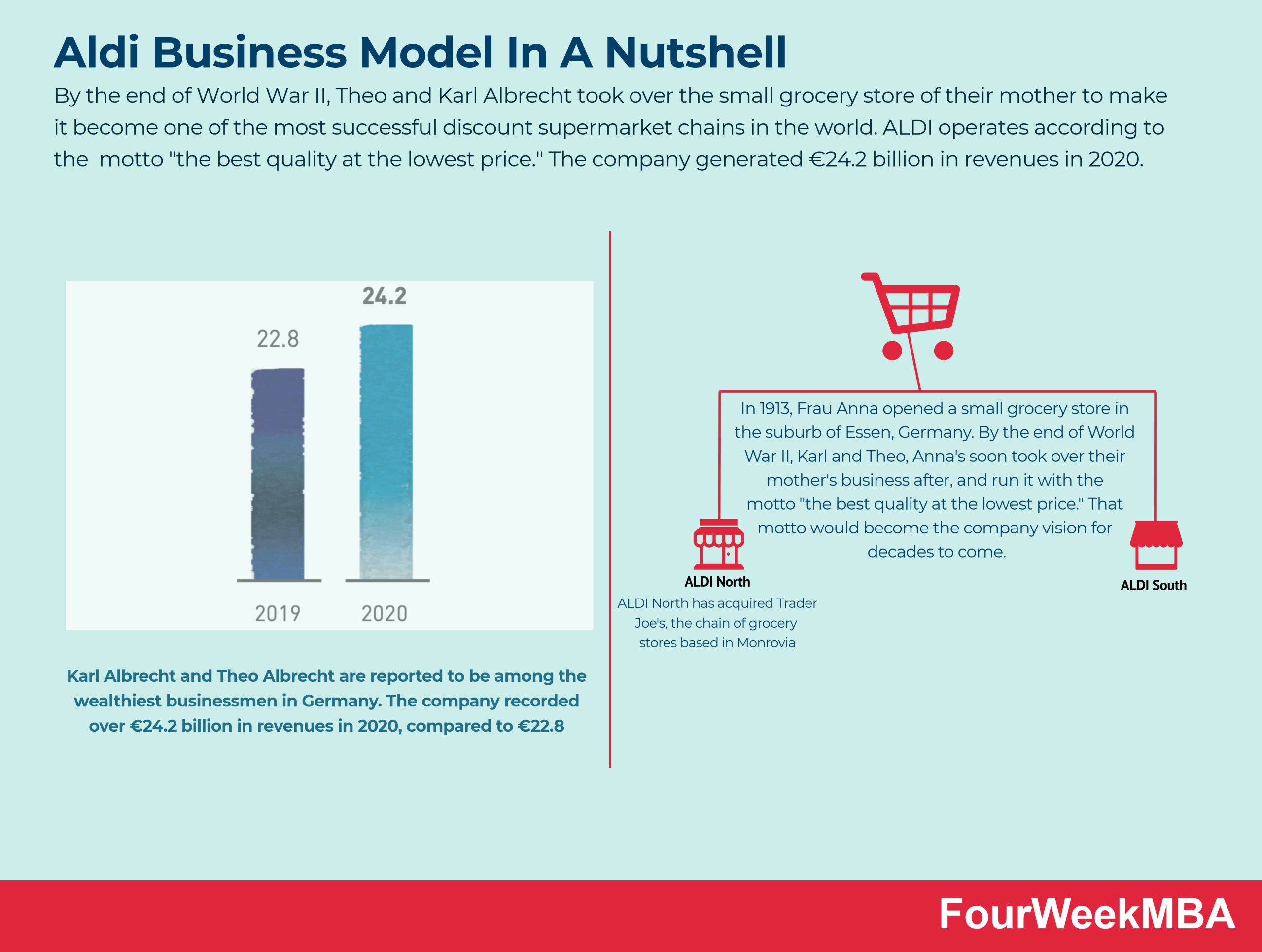 By the end of World War II, Theo and Karl Albrecht took over the small grocery store of their mother to make it become one of the most successful discount supermarket chains in the world. ALDI operates according to the  motto “the best quality at the lowest price.” The company generated €24.2 billion in revenues in 2020.

In 1913, Frau Anna opened a small grocery store in the suburb of Essen, Germany. By the end of World War II, Karl and Theo, Anna’s soon took over their mother’s business, and run it with the motto “the best quality at the lowest price.” That motto would become the company’s vision for decades to come.

By 1948, opening the two brothers had opened four stores in the local area. They managed to keep prices extremely low by only stocking non-perishable items and by selecting the things that sold the most from the shelves while removing the slow-sellers.

The split over a cigarette

In 1962, despite the disagreement kept working together and changed the name of the. group to Aldi Nord and Aldi Süd. The taken from the first two letters of Albrecht and Diskont. The two businesses became financially and legally separate in 1966. By this time, there were 200 Aldi Süd stores in Germany.

In 1979, a trust headed by Aldi Nord’s Theo Albrecht bought the chain Trader Joe’s, which now operates 475 stores in the US.

How does Aldi keep its prices low?

Aldi uses a set of strategies to keep its prices low while maintaining a high quality:

As the company highlights:

ALDI Nord is an internationally successful discounter. We provide broad groups of consumers in nine countries with high-quality products at consistently low prices. “Simplicity, responsibility and reliability” – these values guide our actions and have been codified in our “Simply ALDI” mission statement. The mission statement provides a clear sense of direction for more than 69,000 ALDI employees.

Back in 2017, the company announced its restructuring of the stores, according to the ALDI Nord Instore Konzept (ANIKo) program, aimed as it explained, at creating:

An atmosphere that makes our customers feel right at home – that is the goal at the heart of our new stores. The renovation is the largest project to date in the history of the ALDI North Group. A majority of the 4,700 stores are slated for an update in the next two to three years. Many changes immediately stick out, while others are being made unseen behind the scenes. Our virtual tour reveals all that awaits ALDI North customers in the freshly renovated stores. But that’s not all: it also shows where we are making our product range increasingly sustainable – both in brand-new and already existing stores. Because whether already modernised or not, customers will find a bigger selection, greater freshness and more sustainable products at the proven ALDI price at all of our stores.

Below, some context on how these stores look like:

One of the secrets for ALDI’s business model success is to keep its price low is the own brand’s portfolio, which as you can see spans anywhere from 65% in Denmark, up to 90.5% in the Netherlands.

ALDI’s founders are among the wealthiest businessmen in Germany

As reported on thelocal.de the top ten richest Germans are:

This makes the total personal wealth from ALDI founders at over 33 billion euros (about $38 billion at current rate).

ALDI as a private company

Aldi might well be among the largest private companies in the world. As a private company, ALDI has total control over its strategy without focusing on quarter results. Also, ALDI can keep its number relatively secret from its competition.

What is Aldi's business model?

With the motto “the best quality at the lowest price” ALDI operates a low-cost business model, where it stocks a relatively small list of items available in its store every day, thus keeping waste at a minimum, while also prioritizing on its own brands, which can get distributed with more flexibility in terms of price and distribution.

What is Aldi's business culture?

Aldi’s core purpose is to “provide value and quality to customers by being fair and efficient in all it does.” And it follows three core values: consistency, simplicity, and responsibility. According to Aldi consistency leads to reliability. Simplicity creates efficiency. And responsibility stands for its commitment towards people, customers, partners, and the environment.