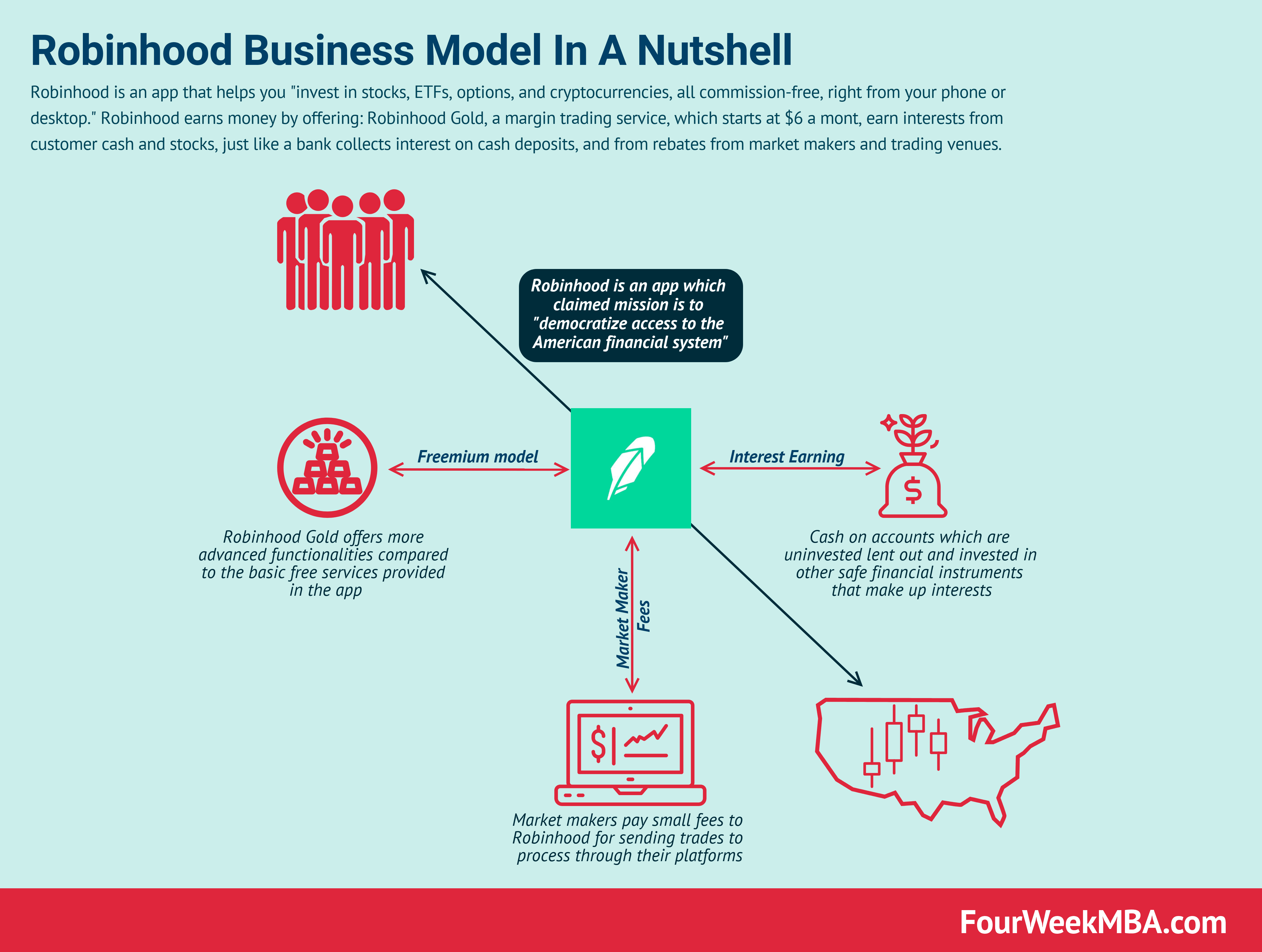 Robinhood is an app that helps to invest in stocks, ETFs, options, and cryptocurrencies, all commission-free. Robinhood earns money by offering: Robinhood Gold, a margin trading service, which starts at $6 a month, earn interests from customer cash and stocks, and rebates from market makers and trading venues.

As pointed out on the Robinhood website you can “Invest in stocks, ETFs, options, and cryptocurrencies, all commission-free, right from your phone or desktop.“
Robinhood earns money by offering:

Robinhood’s claimed mission is to “democratize access to the American financial system.”

Indeed, Robinhood’s primary value proposition is fueled by an investing platform that lets you buy and sell stocks, exchange-traded funds, options, and cryptocurrencies, all commission-free. As its mission is to democratize the financial system, this goes through three main elements of the platform:

As Vlad Tenev, co-founder of Robinhood told Business Insider “there were a lot of people who didn’t believe in it, and we had to bang down a ton of doors. We were really relentless.”

After seventy-five pitches they finally got a round of investing that allowed them to launch the platform.

As explained on the Robinhood website, the realization of a market potential from the app came from the two founders’ experience in selling software to Wall Street’s hedge funds.

They figured those funds paid nothing for those transactions, while the average American would be charged for fees that would be up to $10 for every trade. From that, they realized they could democratize the whole process.

That is why in December 2013 they launched the service on Hacker News even before it was available:

This strategy paid off and Robinhood grew quickly, from a waiting list of hundreds of thousands of users in 2014 to over 3 million accounts in 2018. The convenience of the app is at the same time strength and for some a weakness. As pointed out on Bloomberg “it’s a little bit like putting a casino in an investor’s pocket.”
However, that same frictionless, friendly user-experience, together with a seamless app have made it extremely popular among millennials.
Robinhood also makes money from rebates, as pointed out on its blog “the revenue from these rebates cover the costs of operating the business and to offer commission-free trading.
Robinhood earns ~$0.00026 in rebates per dollar traded. That means if you buy a stock for $100.00, Robinhood earns 2.6 cents from the market maker.”
At the same time, Bloomberg found out that than 40 percent of its revenue in early 2018, came from selling its customers’ orders to high-frequency trading firms, or market makers.
Why does this matter? For a company that called itself Robinhood, which is supposed to democratize the financial markets. It might be paradoxical that the same company makes most of its revenues from users that have small capitals that generate income for high-frequency trading firms, which are the quintessence of Wall Street.

If we look at the Robinhood business model more in detail, we find out it makes money with three primary ways:

When the cash on Robinhood accounts are uninvested cash, those can be lent out and invested in other safe financial instruments that make Robinhood earn a small return on each dollar invested.

Freemium is an effective model that can help companies leverage the free offering to create a sales funnel that generates a continuous stream of leads and paying customers.

Another more controversial way for Robinhood to make money is through market makers, which pay small fees to Robinhood for sending trades to process through their platforms.

When a company becomes a synonym of buying stocks

During the pandemic Robinhood became even more popular, as more people looked into investing:

However, Robinhood also became an app used by teenagers. In June 2020, a 20-year old started to trade options at the margin, and he had accumulated a paper loss of over $700K which led him to suicide.

This opened up the worry of predatory issues from the Robinhood part and the risk of running an app that makes it easy for everyone to trade. How Robinhood will address these issues will also affect how the platform will evolve and how regulation will react to that.

As we saw at the beginning of this story, Robinhood’s preferred mode of expansion has always been through a waitlist that the company opened to quickly gain traction.

Robinhood started to roll out its waitlist in 2019, for the UK. This was an important move, as it would have enabled an expansion outside the US.

As the company announced back in 2019:

In 2013, Robinhood set out on a mission to democratize the financial system. We pioneered commission-free investing in the US to enable everyone to participate in the markets. Since then, over six million Americans have discovered Robinhood.

Today, we’re excited to continue our journey and introduce the Robinhood investing platform to the UK. With Robinhood, you can invest in thousands of US and global stocks, commission-free. There are no foreign exchange fees and no account minimums. Sign up today to get early access when we launch in early 2020.

Yet, as the pandemic hit and growth picked up even further, also troubles came with it. Indeed, one thing is growth, another is hypergrowth.

When companies scale too quickly, especially in a sector, like Robinhood’s growth within the financial industry, things can get messy.

In an industry highly regulated, and with the potential to negatively influence the lives of many young people approaching trading for the first time, Robinhood had to pause its international growth plan and focus on the US market.

In a statement released to TechCrunch the company announced:

A lot has changed in the world over the past few months, and we’ve made the difficult decision to postpone our UK launch indefinitely.

And it stressed out how it needed to focus back on its core, the US, before being able to grow internationally, and not for lack of resources.

Therefore, the focus back to the US, more than a problem of lack of allocated resources for growth, is a problem of handling scalability in an industry that has high regulatory boundaries.

What Is Affiliate Marketing And Why It Matters In Business

Affiliate marketing describes the process whereby an affiliate earns a commission for selling the products of another person or company....