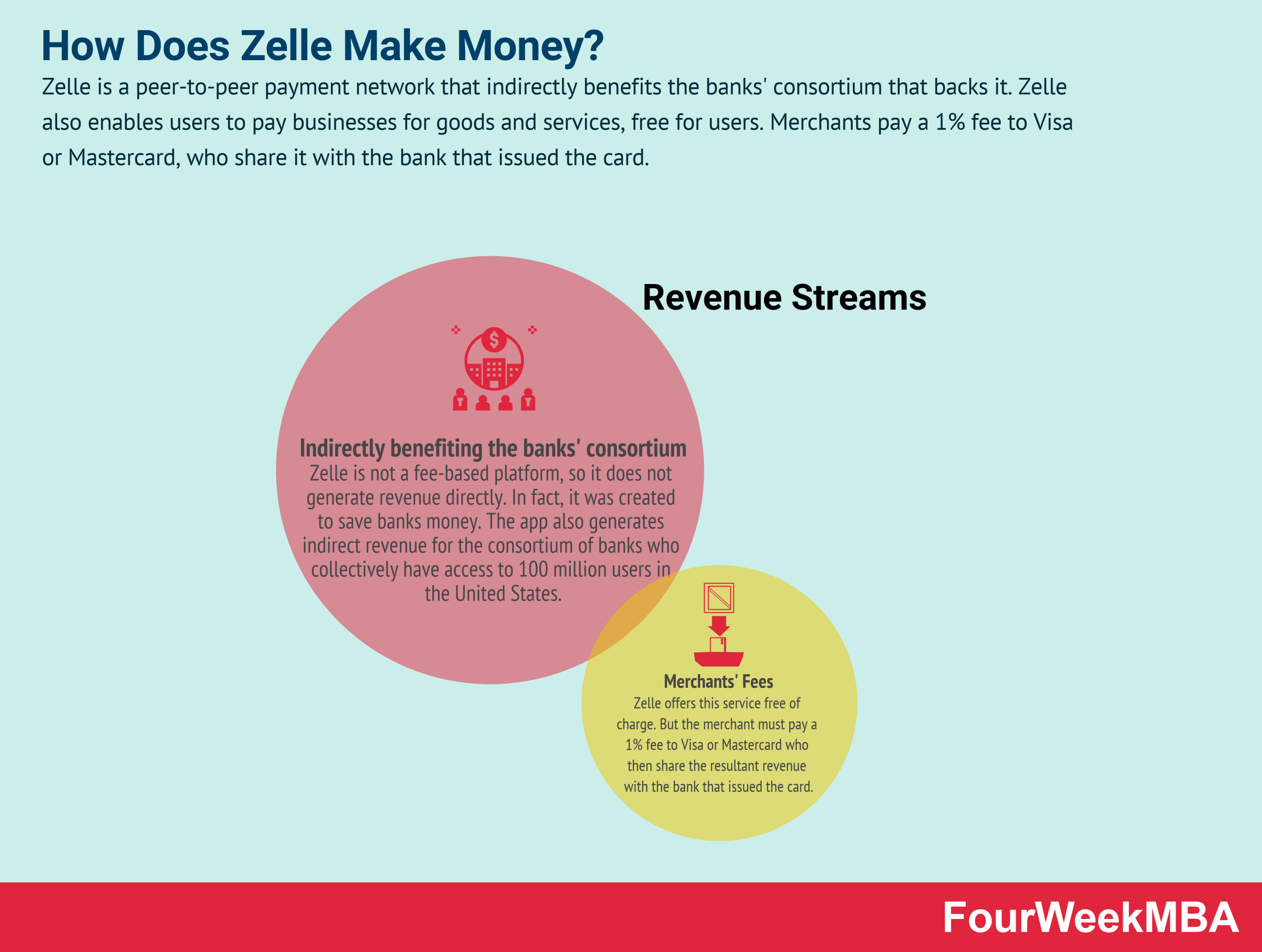 Zelle is a peer-to-peer payment network that indirectly benefits the banks’ consortium that backs it. Zelle also enables users to pay businesses for goods and services, free for users. Merchants pay a 1% fee to Visa or Mastercard, who share it with the bank that issued the card.

Zelle is a peer-to-peer (P2P) payment network. It allows users to send money quickly and easily to their friends and family from a mobile device.

Zelle was created in collaboration between 30 U.S. banks. The standalone Zelle app is integrated with approximately 924 financial institutions, including major players such as Chase, Citi, Wells Fargo, and Bank of America to name a few.

The app moves money from one bank account to another in a matter of minutes. The only information required is the email address and phone number of the recipient. This makes it a more attractive option than a traditional bank transfer, which requires account number details and can take several days.

Zelle is not a fee-based platform, so it does not generate revenue directly. In fact, it was created to save banks money. Competitor P2P offerings such as PayPal, Venmo, and Square charge banks a fee for every transaction, so keeping these transactions in-house reduces costs. This also allows the banking institutions to capitalize on a general shift toward a cashless society and avoid having to maintain ATMs and branch offices.

Importantly, the app also generates indirect revenue for the consortium of banks who collectively have access to 100 million users in the United States. This encompasses a host of the add-on and complimentary services such as credit cards, mortgages, loans, and insurance.

Generation X and Baby Boomer users have also become a significant growth area for Zelle, many of whom were previously unfamiliar with the P2P concept. After just two years, the app has become the largest P2P service in the U.S with users completing around 743 million transactions worth $187 billion.

Although not explicitly stated, Zelle owner Early Warning Services LLC likely receives a payment from participating banks to maintain the integrity of the Zelle network.

In 2018, Zelle launched a feature enabling users to pay businesses for goods and services.

For the consumer, Zelle offers this service free of charge. But the merchant must pay a 1% fee to Visa or Mastercard who then share the resultant revenue with the bank that issued the card.

Looking forward, it would not be unreasonable to suggest that other financial products be recommended within the Zelle app. This would allow partnering institutions to generate revenue through affiliate commissions and referrals.