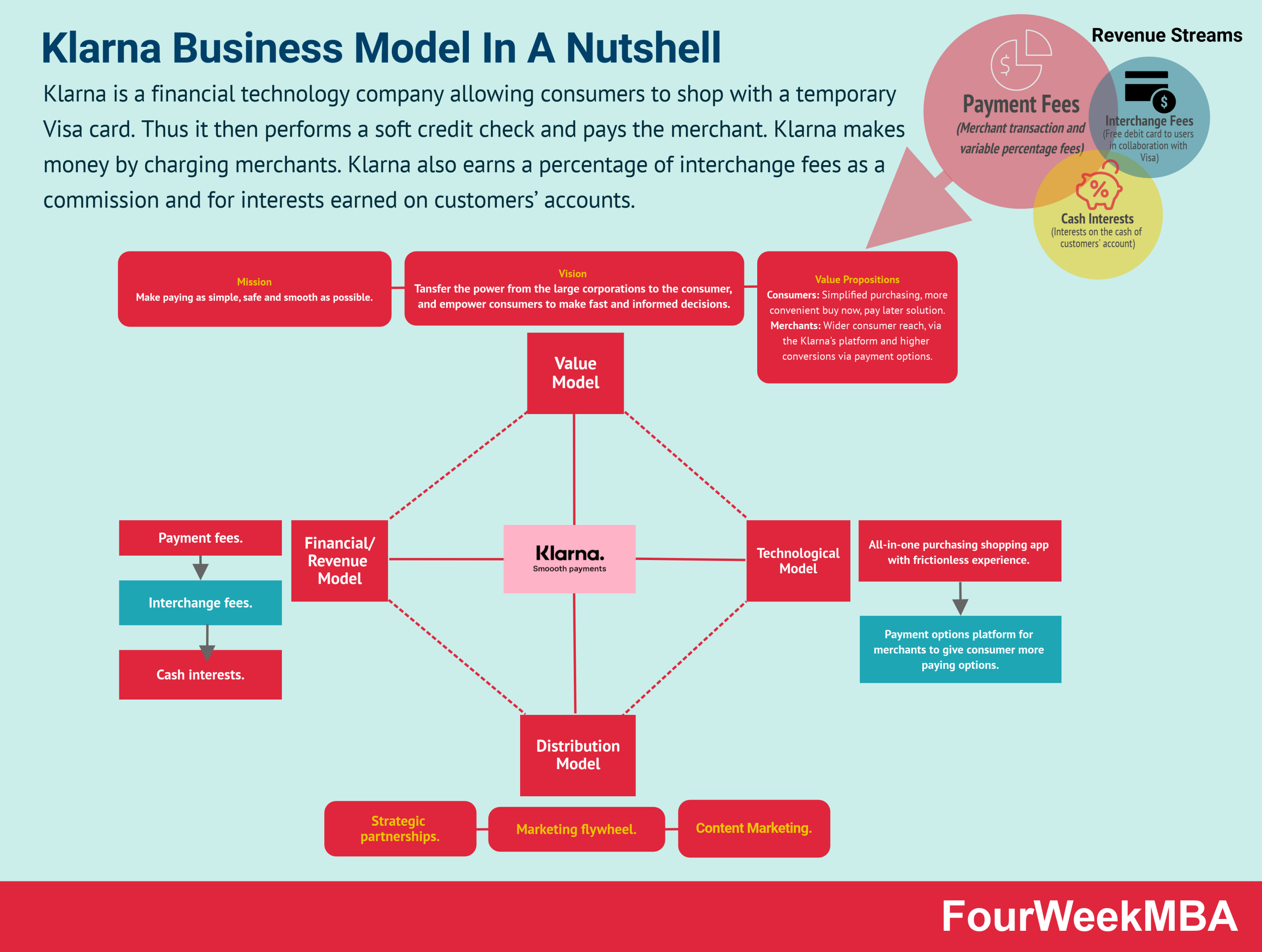 Klarna is a financial technology company allowing consumers to shop with a temporary Visa card. Thus it then performs a soft credit check and pays the merchant. Klarna makes money by charging merchants. Klarna also earns a percentage of interchange fees as a commission and for interests earned on customers’ accounts.

Klarna is a financial technology company founded in Stockholm in 2005.

The company is perhaps best known for its buy now, pay later (BNPL) service. This enables consumers to purchase a product with no upfront cost. Instead, the product is paid off over four interest-free installments over a predetermined period. For larger purchases, Klarna users can finance their purchases over 3 years.

To onboard customers, Klarna allows consumers to shop with a temporary Visa card number known as a “ghost card”. That is, the customer does not need to provide payment details to the merchant when making a purchase. Klarna then performs a soft credit check on the card number ID and pays the merchant. Lastly, the consumer receives the product and an invoice from Klarna with payment instructions.

Klarna’s mission is to “make paying as simple, safe and smooth as possible.“

While Klarna’s vision is to “transfer the power from the large corporations to the consumer and empower consumers to make fast and informed decisions.”

To drive revenue, Klarna very much relies on charging the merchant as opposed to the consumer.

Let’s take a look at some of the primary revenue drivers of Klarna.

The majority of Klarna’s revenue is derived from a merchant transaction and variable percentage fee. These fees fluctuate according to the payment method and country of origin of the customer. In the United States, for example, merchants must pay Klarna a 30 cent transaction fee on top of a variable fee between 3.29-5.99%.

Klarna recently launched a bank account facility with the issuance of a free debit card to users in collaboration with Visa.

When a consumer makes an eligible purchase, an interchange fee (typically around 1%) is paid by the merchant to the card issuer. Klarna then takes a portion of the interchange fee in exchange for promoting Visa as a service to its customer base.

With the aforementioned bank account facility, Klarna earns money on the cash in those accounts by lending it out to other institutions.

Khan Academy is an EdTech non-profit organization whose mission is “to provide a free, world-class education to anyone, anywhere,” It...