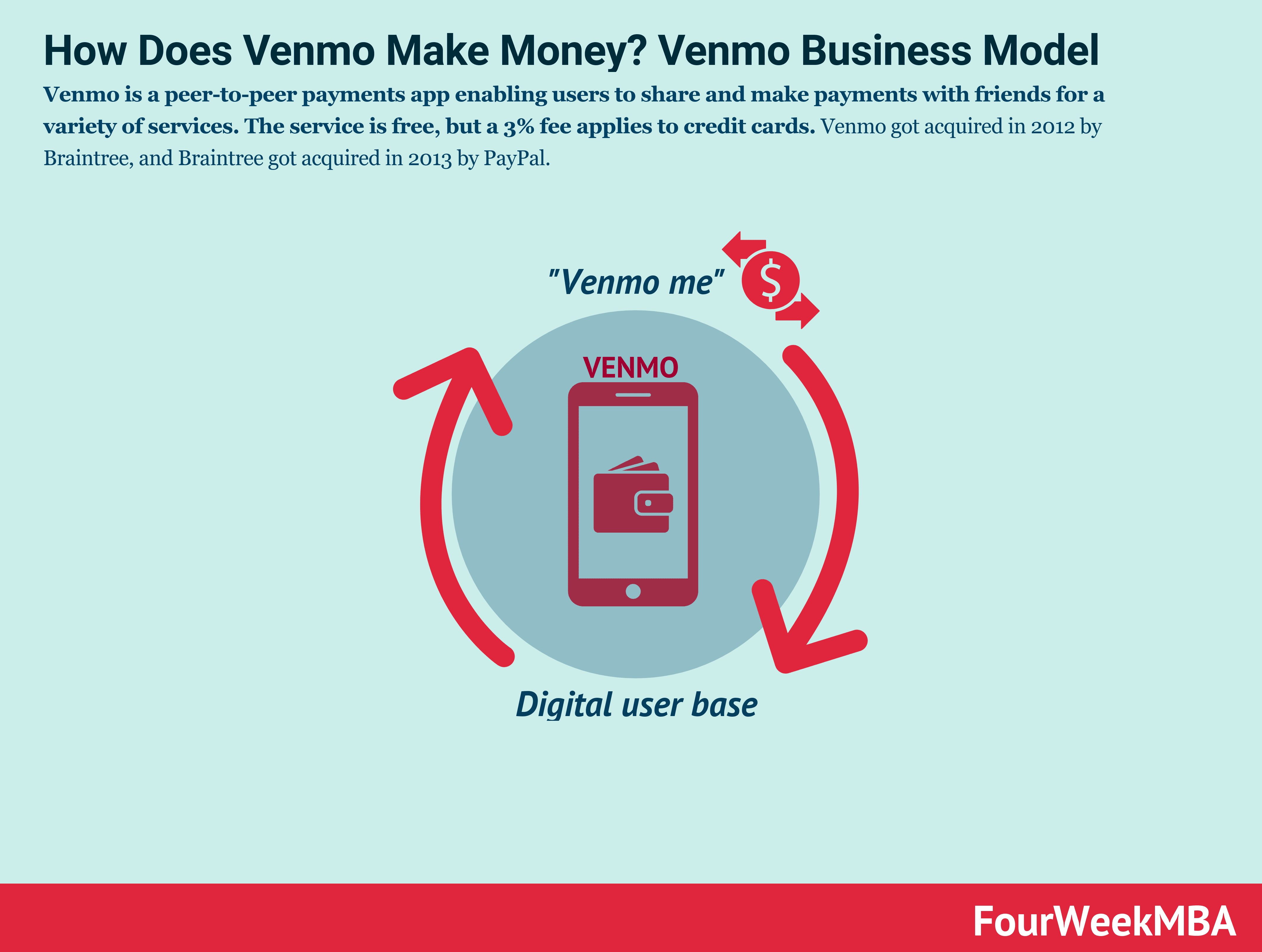 Today Venmo is part of the PayPal ecosystem. In fact, PayPal was acquired by eBay in 2002, ever since it started an acquisition campaign of several brands, including Braintree (in 2013).
For PayPal expanding its product line has been a critical move. Thus, Venmo has directly contributed to PayPal’s growth in the last years.
Within PayPal “Payments Platform” there are combined payment solutions, like PayPal, PayPal Credit, Braintree, Venmo, Xoom, and iZettle products.

Why is Venmo free?

Venmo generates revenue through transaction fees. While most free-to-use mobile apps turn to advertisements for revenue purposes, Venmo has managed to avoid this path.

In a way, Venmo can afford to be free as part of the PayPal ecosystem. In fact, Venmo is the mobile app that allows PayPal to enter a market, those of the millennials.

After several complaints about how the company handled privacy disclosures, there was a settlement with PayPal, as reported by Tech Crunch.

As claimed by Venmo in terms of security “Your personal and financial data is encrypted and protected on our secure servers to guard against unauthorized transactions.”

The P2P transactions industry in a nutshell

As of 2017, the person-to-person transactions (P2P) represented an important growth driver for PayPal. In fact, as specified in the 2017 annual report:

Even though the margins on P2P transactions have lower rates and carry foreign exchange hedging losses compared to large merchants accounts which make up most of the so-called Total Payment Volume (this is a key financial metric for PayPal long-term success), the P2P market is massive:

As reported by emarketer.com:

The use of mobile peer-to-peer (P2P) payment apps such as Venmo in the US will continue to grow by double digits through 2021, according to eMarketer’s latest mobile banking and payments forecast.

Thus, besides the current amount of revenues provided by Venmo in order to affect PayPal bottom line, the strategic importance of this mobile app will have a long-term financial impact too.

We noticed that we were still using cash and checks to pay each other back and thought this was silly. Everyone should be using PayPal to pay each other back, but no one we knew was. We thought something must be not quite right about the PayPal experience for casual use, and we decided to design something that felt “right,” something that felt consistent with all of the other mobile tools we used to interact with our friends, like SMS, Gmail, Facebook, etc.

As roommates at the University of Pennsylvania in 2001 with Iqram Magdon-Ismail that is how the friendship was born.

During the senior year, Iqram and Andrew built their first real project together, a college classifieds site called My Campus Post.

Then, the two started to build websites for local small businesses, at any price that would allow them to survive.

It was a real door to door selling experience that taught them about rejection but also how to make things work.

After that, they joined an NYC based company called iminlikewithyou.com, which was backed by Y Combinator.

When the company pivoted to become a games company the two young men left and they temporary split.

In fact, while Iqram Magdon-Ismail joined Ticketleap as the VP of Engineering for a few years. Andrew Kortina bounced around and ended up spending time working at Betaworks, on Bit.ly.

They knew they wanted to do something together. They just didn’t know yet what would become their next venture.

That’s way when they browsed several ideas, they also thought of a music app. This is a scatch of the music app idea shared by Andrew Kortina via kortina.nyc:

Until finally the idea of Venmo came about:

This is how Venmo’s unique value proposition was drafted.

When “Venmo me” became a verb

Today Venmo is quite popular among millennials. It is also interesting to see how the company name over time evolved to become a verb “venmo me:”

Example of how “venmo me” has become a verb in the US culture and across several states.

Of course, having your company name become a verb doesn’t guarantee success. Yet, we know for a fact that when that happens, that company is close to becoming a cult.

Like when Google became a verb “google it.”There can’t be any comparison yet between Venmo and Google as verbs:

Comparison between “venmo me” and “google it” according to Google trends.

You can see how Google is a cult on the web. However, it interesting to see how Venmo is trying to becoming a mainstream phenomenon at least in the US, in the transaction space.

How did they do it?

Branding campaigns to make Venmo into a cult

The success of a brand name at the point of having it join the everyday language isn’t – I argue – something that you can predict neither plan.

Some interesting Venmo campaigns are funny and compelling:

Just like Google is continuing millions of people to talk with its voice assistants, with a simple command, that says “Hey, Google!”

Venmo is using a similar strategy for Siri, the voice assistant for the Apple devices:

Other branding campaigns have been used to address millennials:

Why do millennials like it so much? As reported by millennials interviewed via clickondetroit.com:

“Venmo has essentially eliminated the use of checks for our generation,”

“Having the ability to immediately pay a friend at dinner or split a bill with roommates over the phone is extremely convenient.”

Bognar, 25, said the social aspect of Venmo is a huge selling point.

“I also enjoy the network effect they have created. Venmo has a live feed similar to your Facebook timeline, and I can quickly see my friends paying each other,” Bognar said.

How much money does Venmo make?

As we’ve seen Venmo is now part of the products offering for PayPal. Thus, although we don’t have any sales breakdown.

As highlighted by Dan Schulman, President & CEO in the October 2019 earning transcript:

Venmo continues to be an incredibly powerful platform for engaging consumers. We processed more than $27 billion in volume for the quarter, growing 64%. That’s almost $300 million in payments per day and an annual run rate that now exceeds $100 billion. The Venmo team has made tremendous strides in enhancing the use cases of Venmo including a recently signed deal with Synchrony to provide a Venmo credit card. All of this is producing very strong monetization results. We ended Q3 with Venmo just shy of a $400 million annual revenue run rate.

Even though the P2P transactions might have lower margins for PayPal, they do bring benefits concerning market reach, product offering, and brand recognition.

Indeed, as of 2019 Venmo is not profitable yet, and its user base might be around 40 million digital users as reported by CNBC.

How does Venmo work?

Whit Venmo you can primarily perform a few activities like:

Pay family and friends with Venmo accounts using a phone number or email. If they don’t have a Venmo account, they’ll just need to create one. Find friends automatically by syncing your Facebook or phone contacts.

Venmo is free unless you pay with credit cards:

When you send money using your Venmo balance, bank account, debit card or prepaid card, we waive fees so it’s free. Our standard 3% fee applies to credit cards. Receiving money and making purchases in other apps is always free.

Venmo is a peer-to-peer mobile app, trendy among millennials, and part of the PayPal ecosystem.

Its popularity is also based on the ability of the company to make its name become a verb among millennials.

It is also the app that allows PayPal to enhance its product offering and make it more suited for younger generations.

Venmo together with other apps, part of the PayPal ecosystem has taken over the peer-to-peer transaction industry.

3 thoughts on “How Does Venmo Make Money? Venmo Business Model In A Nutshell”

What Is The Total Addressable Market And How To Assess It

A total addressable market or TAM is the available market for a product or service. That is a metric usually...