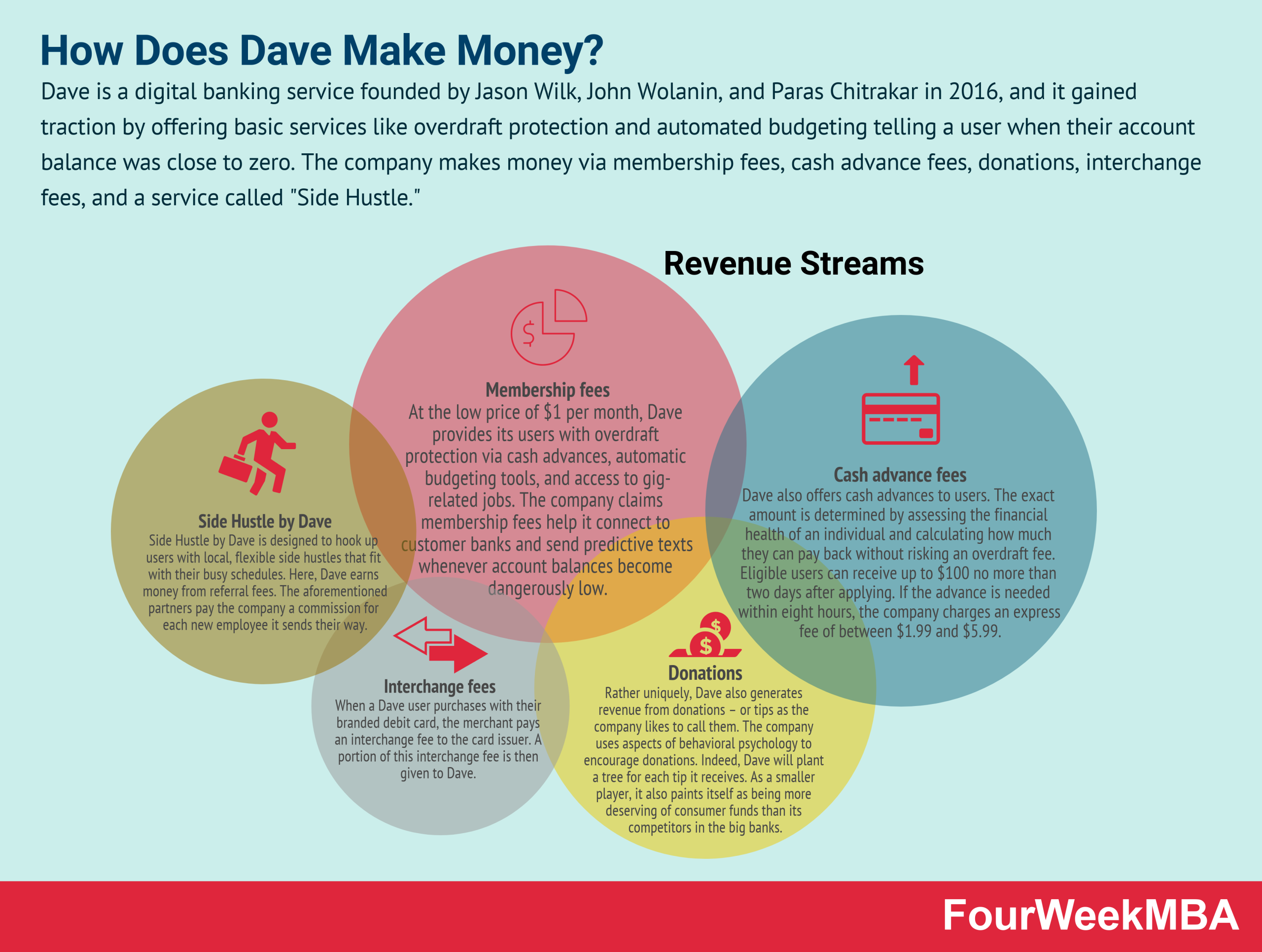 Dave is a digital banking service founded by Jason Wilk, John Wolanin, and Paras Chitrakar in 2016, and it gained traction by offering basic services like overdraft protection and automated budgeting telling a user when their account balance was close to zero. The company makes money via membership fees, cash advance fees, donations, interchange fees, and a service called “Side Hustle.”

According to the company website, the trio created Dave after becoming frustrated with overdraft fees while studying at college. With customer confidence in the big banks at historically low levels, they recognized that 2016 was the perfect time to develop the new platform. The very name of the company also stems from this battle with the big banks, who are collectively referred to as Goliath by the company founders.

Initially, Dave offered simple solutions to simple problems. Chief among them were overdraft protection and automated budgeting telling a user when their account balance was close to zero.

The platform was launched in early 2017 after participation in the FinLab innovation accelerator program. Seed funding of $3 million was raised soon after, headlined by billionaire entrepreneur Mark Cuban.

Dave’s revenue generation is much the same as similar financial services or neobank companies.

However, there are some slight differences.

Let’s take a look at how the company makes money.

At the low price of $1 per month, Dave provides its users with overdraft protection via cash advances, automatic budgeting tools, and access to gig-related jobs.

Dave also offers cash advances to users. The exact amount is determined by assessing the financial health of an individual and calculating how much they can pay back without risking an overdraft fee.

Eligible users can receive up to $100 no more than two days after applying. If the advance is needed within eight hours, the company charges an express fee of between $1.99 and $5.99.

Rather uniquely, Dave also generates revenue from donations – or tips as the company likes to call them.

The company uses aspects of behavioral psychology to encourage donations. Indeed, Dave will plant a tree for each tip it receives. As a smaller player, it also paints itself as being more deserving of consumer funds than its competitors in the big banks.

When a Dave user purchases with their branded debit card, the merchant pays an interchange fee to the card issuer. A portion of this interchange fee is then given to Dave.

In this case, the card issuer is Evolve Bank & Trust.

Side Hustle by Dave

Side Hustle by Dave is designed to hook up users with local, flexible side hustles that fit with their busy schedules.

This is facilitated by a network of partners who post jobs users can apply for from their smartphones. Some typical examples of available jobs include rideshare drivers, dog walkers, and food couriers.

Here, Dave earns money from referral fees. The aforementioned partners pay the company a commission for each new employee it sends their way.