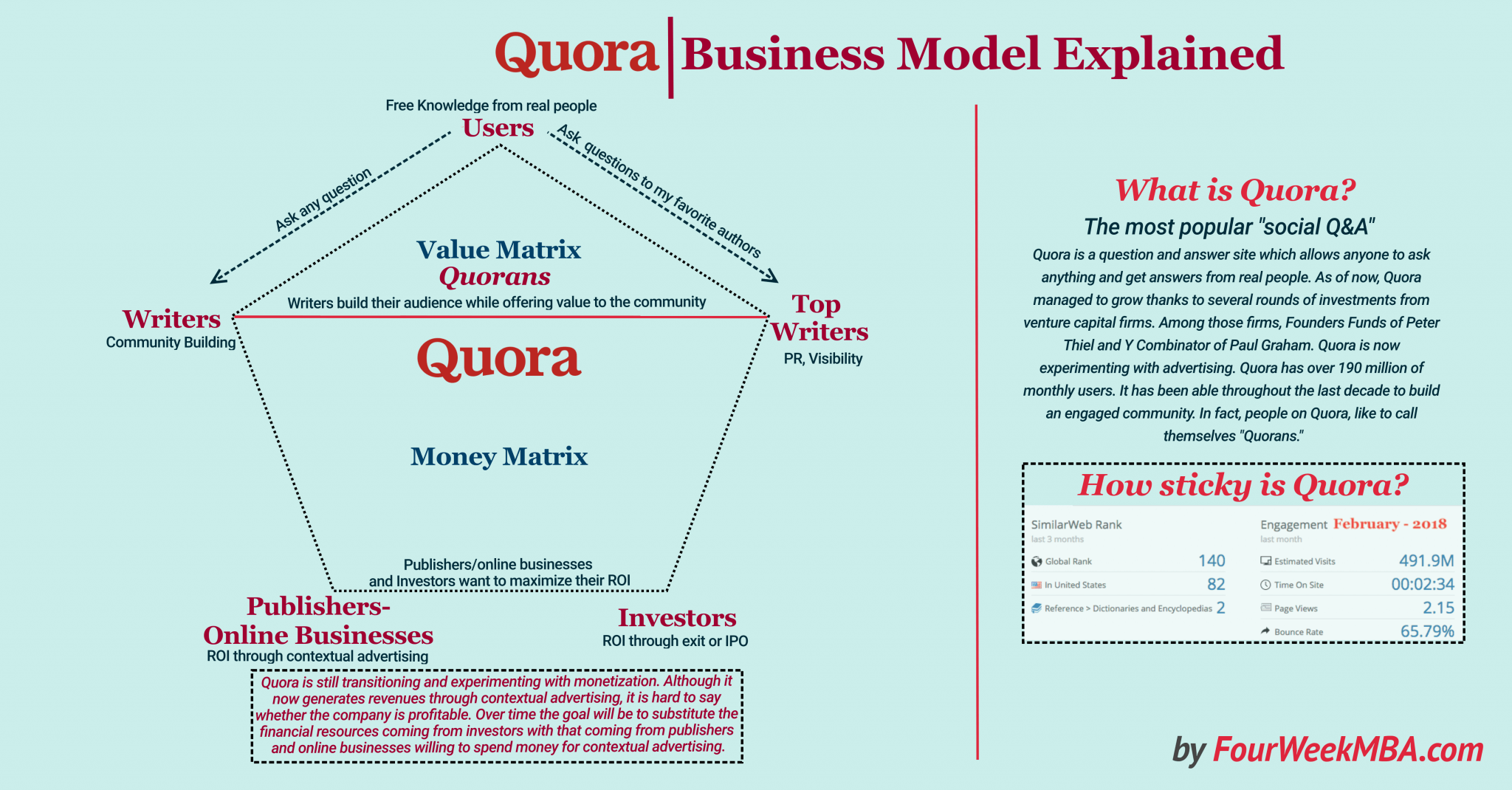 Quora is a question and answer website which allows anyone to ask questions publicly or anonymously. As of now, Quora grew thanks to several rounds of investments from venture capital firms. Among those firms, Peter Thiel‘s Founders Funds and Paul Graham‘s Y Combinator. Quora now generates revenues with advertising.

Founded by Adam D’Angelo, former Facebook’s CTO, Quora is a question and answer site that allows anyone to ask any question; while it is possible to do that on Google as well. The main difference is that on Quora you get answers from real people. Google, instead, matches a user query with content available on the web. Also, Quora allows users to ask questions publicly or anonymously.

Quora has over 190 million of monthly users, with millions of questions asked and answered. Besides being a Q&A platform, Quora is a huge, engaged community. Also,   many public people take the time to answer questions personally. Just like Hillary Clinton starts to answer questions on Quora during the electoral campaign. Or famous authors, like Tim Ferris, organize Q&A session during his book launch. Therefore, you can access expertise for free and easy. This, of course, represents a great success for Quora.

What are the most frequently asked questions on Quora?

The most asked questions on Quora are in the following categories:

How much is Quora worth?

After receiving a series D investment of $85 million, Quora got total funding of $452 million. This places Quora among the so-called Unicorns startups with a valuation of $1.8 billion according to Tech Crunch. If the company keeps growing and attracting larger investors it will go for an IPO. However, before taking this step, Quora has to be able at least to generate revenues to sustain its growth.

By looking at the comparison between Quora and Reddit, it seems clear that Reddit is stickier than Quora:

In fact, regarding page views and time spend on page Reddit shows 10:33 minutes and 7.43 respectively. Compared to Quora 2:34 minutes and 2.15 page views.

However, there are a couple of considerations here. First, Reddit has been around for longer (it was founded in 2005). Second, Reddit is more of a forum, where anyone takes part of the discussion. Quora is more based on writers ability to engage users. And Quora’s ability to create the right environment to retain writers.

Therefore, Quora is much more about making knowledge and expertise available to its users. Even though both platforms are accessible from Google search results. Often answers on Quora are way shorter than discussions on Reddit. Thus, many users might just get in, read the answer and leave.

Also, ever since Google is experimenting with the so-called featured snippet, it uses more and more answer to complex queries, coming from Quora as a way to answer to users questions directly from the search results. Therefore, Google might be de facto stealing traffic from Quora itself.

Quora is a Q&A platform that empowers people to share and grow the world’s knowledge. The vast majority of human knowledge is still not on the internet. Most of it is trapped in the form of experience in people’s heads, or buried in books and papers that only experts can access. More than a billion people use the internet yet only a tiny fraction contribute their knowledge to it. We want to democratize access to knowledge of all kinds—from politics to painting, cooking to coding, etymology to experiences—so if someone out there knows something, anyone else can learn it. Our mission is to share and grow the world’s knowledge, and we’re building a world-class team to help us achieve this mission.

I believe there are three critical factors that contributed and contributes to Quora success:

Questions that Google can’t answer (Yet)

From the mission above it’s clear that Quora is about knowledge. When Google started out; it was about organizing the information scattered around the web with smart algorithms. PageRank was the most intelligent at the time. Able to put an order to a network made of billion disjoined pages.

Quora instead, started from the opposite assumption. Take what’s inside experts’ people heads and make it available to anyone. That is true; Google is moving more and more toward giving as many answers as possible to its users (we saw that with the featured snippet and with the transition toward voice search).

However, that knowledge is still organized by algorithms that extract relevant information from web pages. Instead, Quora starts from human creation, and curation. The algorithms play a role just in understanding people’s preferences, the so-called feed. In a world that moves swiftly toward AI (Google now is an AI first company) having this human approach, for now, might be the winning hand.

This connects to the next point.

In the digital marketing space, ChatBots are taking over. However, for how much any online business loves the idea of software that creates content automatically. People still like to interact with people. Quora allows just that. In fact, not by chance, the most popular questions are those related to life and career advice. We all want to feel understood. There’s no better way than having other people sharing their experiences. The paradox here is that in a digital world that moves toward automation and AI, having a community based on human interactions might be a winning strategy in the long run.

Quora is about Quorans

Another critical aspect is that Quora is as much about asking questions, as it is about answering them. In fact, Quora does not only provide value to its users but also to people who write. Many aspiring writers get on Quora each day to honing their craft. That is why they love to call themselves Quorans.

There are few stakeholders involved in Quora’s success. Those are:

As of now, Quora’s business model is based on two main foundations:

Quora is successfully generating revenue through its advertising program. However, it isn’t clear yet whether the company is profitable or not. Therefore, if as of now the company has still to rely on financial resources coming from investors plus advertising, the future will move more toward advertising alone to allow Quora to become profitable. Of course, other monetization strategies will get experimented in the meanwhile.

Wolfram Alpha is a computational knowledge engine that makes money by selling a pro subscription for students and educators that starts...