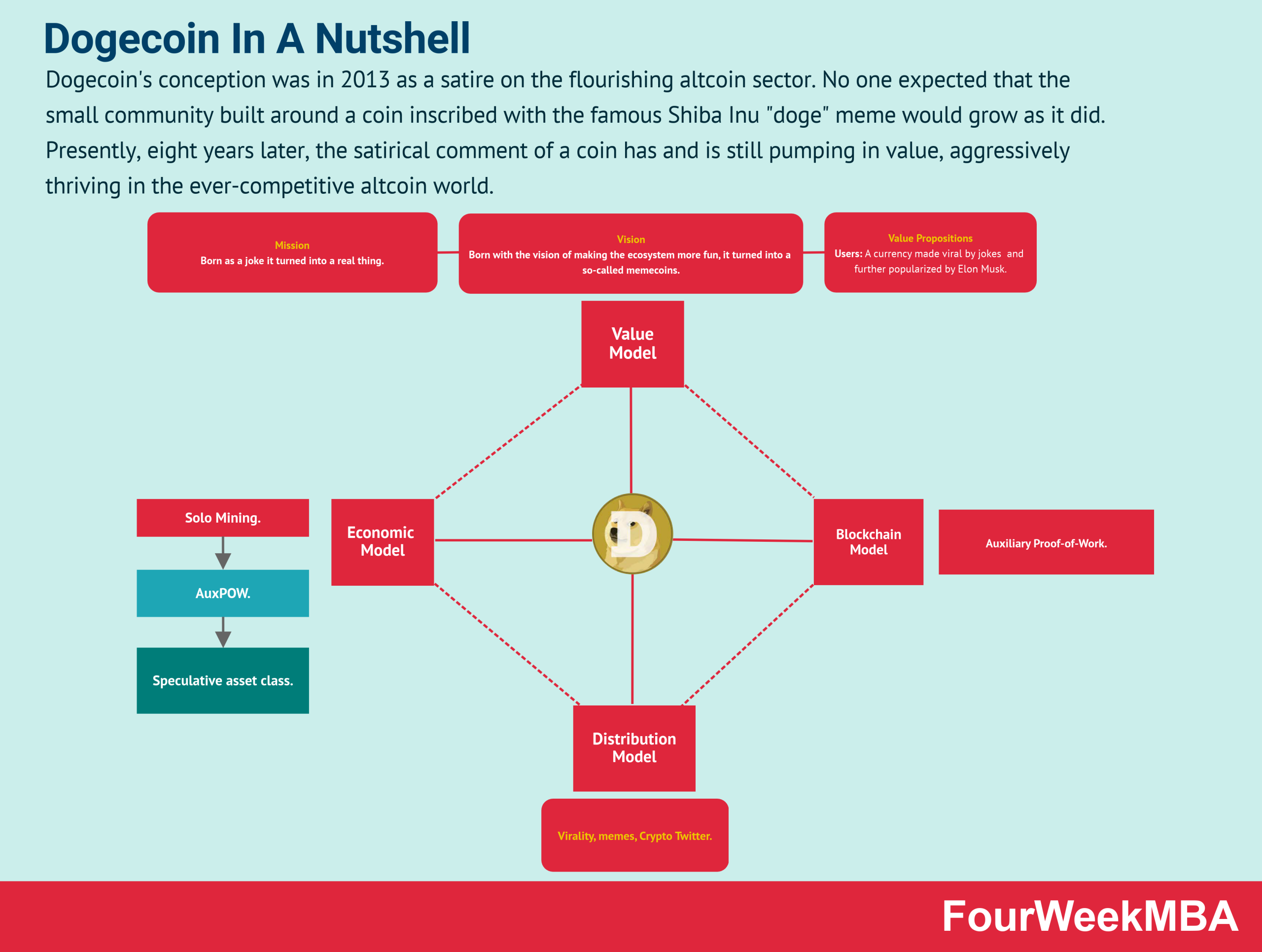 Dogecoin’s conception was in 2013 as a satire on the flourishing altcoin sector. No one expected that the small community built around a coin inscribed with the famous Shiba Inu “doge” meme would grow as it did. Presently, eight years later, the satirical comment of a coin has and is still pumping in value, aggressively thriving in the ever-competitive altcoin world. And things only got even more interesting, when Elon Musk started to tweet with more and more frequency about that.

And as the discussion around the inefficiency and electric consumption of Bitcoin, Elon Musk turned to Doge even more:

Originally developed in 2013 as a fun and friendly alternative to Bitcoin, Dogecoin is now becoming the next big decentralized, peer-to-peer digital currency that eases and expedites money transactions online. As the brainchild of IBM developer Billy Markus and Adobe Data Scientist Jackson Palmer, Dogecoin was created as a satirical commentary on the buzz around cryptocurrencies, incorporating the “Doge” meme that first made waves on Tumblr and Reddit but caught on up until this day.

Dogecoin uses the Luckycoin protocol, specifically on Litecoin. Like most existing digital currencies, Dogecoin can be “mined.” But, unlike other cryptocurrencies that have a limited supply, it is constructively limitless.

It is a cryptocurrency that wants to be the standard for fun cryptocurrency, fostering an equally friendly and robust community. Dogecoin has swiftly garnered support and a solid following among crypto enthusiasts; among those is the well-known businessman-slash-billionaire Elon Musk.

Like most assets, Dogecoin’s value is dependent on the number of people willing to invest in and pay for it. Currently, the value of each Dogecoin is determined globally. Thus, the price disparities are attributed to the arbitraging traders.

Before delving into the applications of Dogecoin, it is important to establish that there are two methods whereby it can get mined: Solo Mining or Dogecoin Mining Pool. From its namesake, Solo Mining is where you mine alone. On the other hand, Dogecoin Mining Pool comprises many users combining their processing power, thereby boosting the race’s odds to have transactions approved. Although solo miners enjoy the rewards alone instead of pool mining which has to divide rewards equally among the pool members, pool mining is still generally suggested over solo mining just for the wealth of rewards.

Dogecoin basic algorithm is called Auxiliary Proof of Work (or merged mining), as highlighted by captainaltcoin.com “Merged mining is a process of mining two cryptocurrencies with a same algorithm simultaneously. This allows the miner to direct his hashing power into mining two cryptocurrencies at once, resulting in higher hash rates for both of them. As the miner contributes to the total hash rate of both blockchains, he contributes to making both networks more secure.”

At present, you can use Dogecoin direct purchases at stores that accept it, including but are not limited to restaurants, online travel agencies, web hosting providers, and video game retailers, to name a few. More specifically, here is a list of some stores already accepting Dogecoin as a payment form:

Aside from direct purchases, Dogecoin has been taking up space in the sports scene. Dogecoin donated more than $100,000 worth of Dogecoin to sports sponsorships in 2014. These sponsorships were instrumental to the participation of Nascar driver Josh Wise in a high-profile racing competition, the participation of a Jamaican team in the Olympics held in Russia, and the involvement of an Indian athlete in the Olympics. Aside from supporting these athletes to compete in their respective fields, the sports sponsorships have been pivotal in gaining considerable attention and support for Dogecoin, thereby driving its uptake as an investment and as a mode of payment.

Needless to say that Dogecoin’s primary distribution channel has been virality. From Reddit, to Twitter, it became a sensation between 2020-2021. If it will keep its momentum will depend on whether its code will be picked up by developers, and it will be also used as a potential alternative to Bitcoin (thus accepted as payment or perhaps as asset class).

The exponential growth in search volume of Dogecoin as it gained popularity via Twitter and Reddit. As it happens with viral growth, the curve is exponential. Yet hard to sustain. However, if momentum is used to attract interest from the developer’s community to work on its code, and from business people to propose it as an alternative to Bitcoin, then it can keep its pace.

Aside from its existing value proposition and applications, Dogecoin holds excellent promise across a multitude of other use cases, including the following:

Individuals increasingly use Dogecoin to tip their favorite content creators across multiple digital platforms. Consequently, content creators can use these tips on purchases or hold them as investments. With the 130 percent rise in its value in the past year and a projected 860 percent rise for this year, keeping Dogecoin as an investment can deliver promising returns for investors.

Yes, the very cryptocurrency that was born out of satirical commentary can get bartered for houses. This potential became emergent as the 27-year-old entrepreneur Matt Thompson made public his intention of selling his vacation home for 100 million Dogecoins. Matt Thompson, who has been a Bitcoin user since 2011, was among the first to adopt Dogecoin just two days after they were available online. After several months of getting no offer on the market, he decided to accept Dogecoin payments in exchange for his three-bedroom, two-bath home in Sawyer County.

No one knows what lies ahead of Dogecoin. Whether Dogecoin remains true to its original purpose of being a satire, whether Dogecoin will assume an actual use case, or whether this is all part of an excellent marketing master plan has yet to be revealed.

After all, co-founder Jackson Palmer was part of the marketing department of Adobe Systems. So, no one knows for sure. But, what is known is the fact that Dogecoin has demonstrated great potential as it has topped the hype cycle several times since its conception.

The uncertainty of having a utility cannot deny the current success of Dogecoin as a cryptocurrency. Although its value drastically fluctuates from time to time, the power of marketing, brand recognition, appealing memes, and support from influential names override the risks and are enough to prompt a community to get Dogecoin moving to greater heights.

Dogecoin has come so far from its intended purposes. No one knows for a fact what lies ahead of it, nor most of its existing counterparts. With that in mind, Dogecoin might be the right play for people who take the fun on the roller coaster rides of piercing price swings. But, as far as projections can tell, Dogecoin will be up for the long ride.