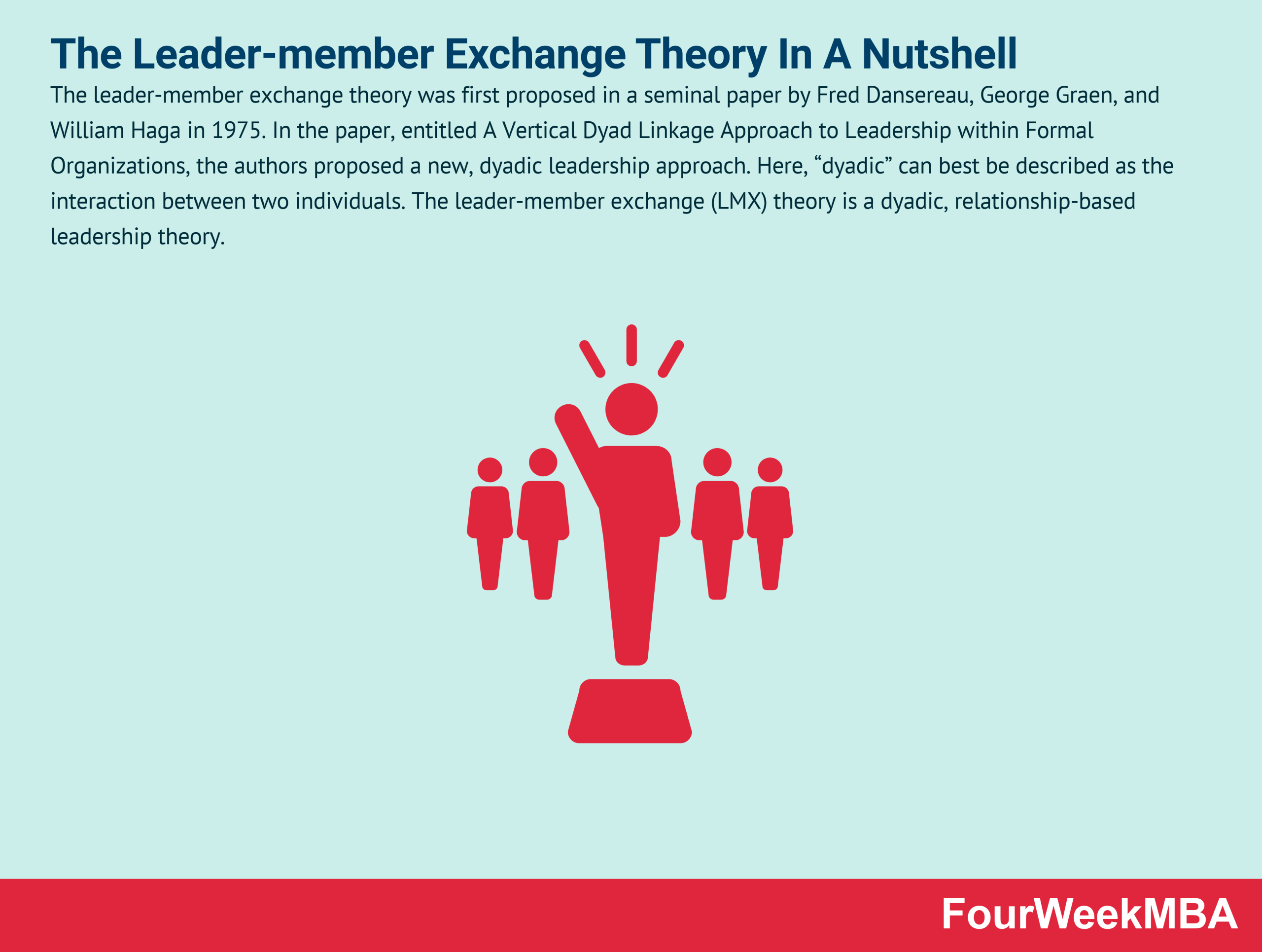 The leader-member exchange theory was first proposed in a seminal paper by Fred Dansereau, George Graen, and William Haga in 1975. In the paper, entitled A Vertical Dyad Linkage Approach to Leadership within Formal Organizations, the authors proposed a new, dyadic leadership approach. Here, “dyadic” can best be described as the interaction between two individuals. The leader-member exchange (LMX) theory is a dyadic, relationship-based leadership theory.

The leader-member exchange theory revolves around the notion that leaders sometimes interact differently depending on the subordinate. With some subordinates, the relationship may be characterized by trust, personal involvement, and investment. Conversely, other relationships involve less investment and trust with more formal, quid pro quo transactions.

Both these relationships comprise the theoretical basis of the similar social exchange theory (SET), which argues social behavior is the result of an exchange process designed to maximize benefits and minimize costs.

The three stages of the leader-member exchange theory

Further research into the LMX theory in 1987 suggested leader-member exchange could be explained in three stages:

When a new employee first joins a team, the leader observes them in an attempt to identify their talents, motivations, and general attitude toward the work itself. This stage may last for hours or days, depending on the circumstances.

During the second stage, the new employee performs various project tasks and assumes some responsibility. The leader may pay particular attention to the way a new employee handles difficult, stressful, or problematic situations.

In so doing, the leader consciously or subconsciously begins categorizing the subordinate into one of two groups:

In the final stage, the leader and their subordinates establish routine and habitual ways of operating based on the categories mentioned above.

This is good news for the in-group, who continue to enjoy a strong working relationship with their superiors.

The implications for out-group members are more significant because initial impressions are difficult to change. With no access to leadership or incentives designed to motivate performance, these employees act in ways that reinforce a self-fulfilling prophecy.

Ultimately, the leader-member exchange theory encourages leaders to check their biases. The theory also suggests it is incumbent on the leader to initiate and develop better relationships with those in the out-group.

These actions increase the likelihood a subordinate will reciprocate the goodwill shown, forming a relationship more conducive to personal and organizational success.