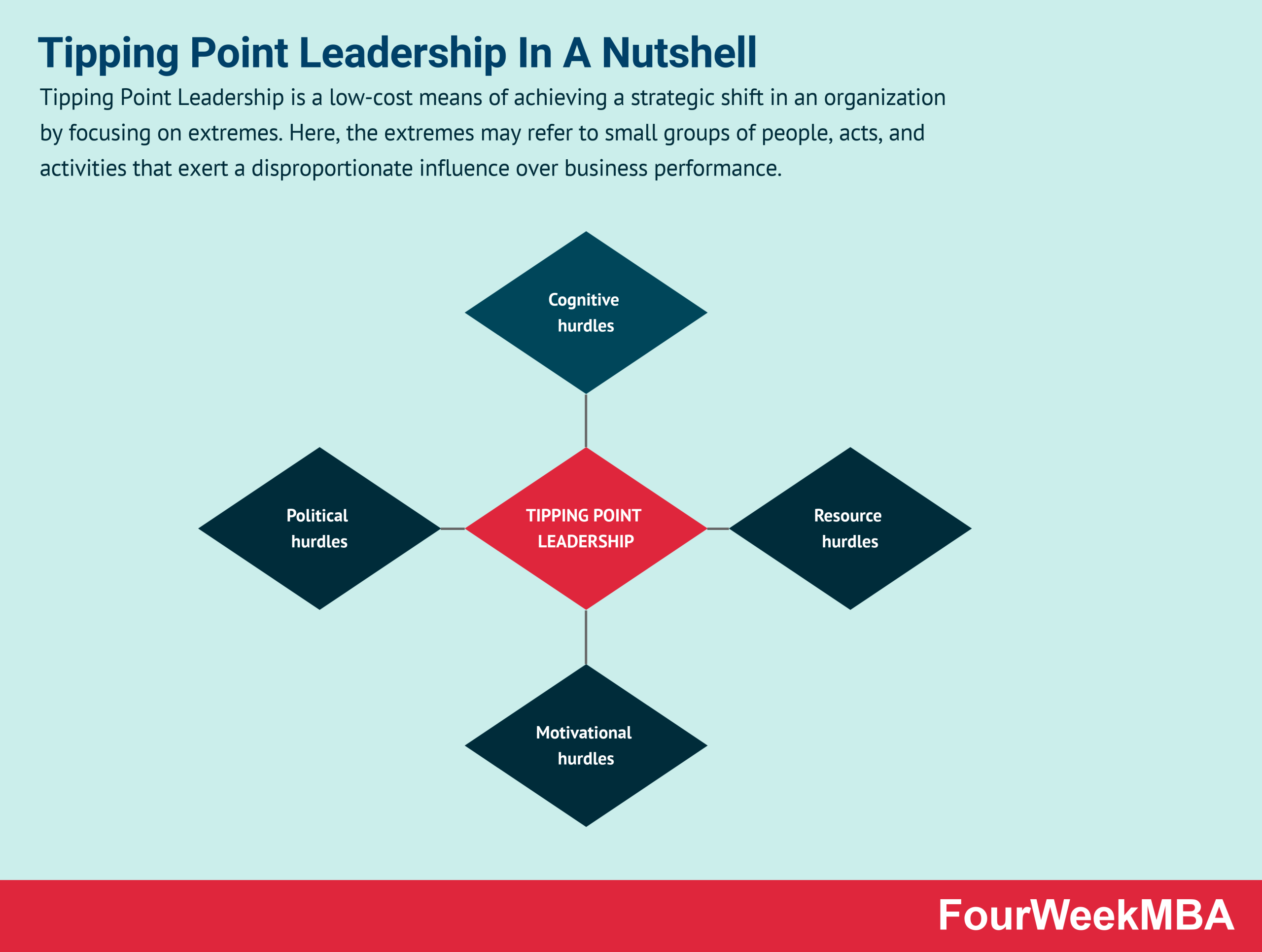 Tipping Point Leadership is a low-cost means of achieving a strategic shift in an organization by focusing on extremes. Here, the extremes may refer to small groups of people, acts, and activities that exert a disproportionate influence over business performance.

Tipping Point Leadership was created by researchers W. Chan Kim and Renee Mauborgne to show how leadership can work in business.

When new ideas spread quickly through an organization, Chan and Mauborgne argued that this would only happen when a critical mass of people become engaged in the idea.

To institute change however, the critical mass must consist of people who make strong and robust arguments for change. These people concentrate on what matters most and have a unique ability for mobilising others in support of a cause. Importantly, they only comprise a small fraction of the total workforce.

Indeed, Tipping Point Leadership contradicts conventional wisdom around organizational change which suggests that it can only be achieved through the resource-intensive conversion of the majority of employees.

This strategy is perhaps best demonstrated by reflecting on the example of the New York City Police Department (NYPD). When Police Commissioner William Bratton took the helm in 1994, the NYPD was notoriously difficult to manage. The city itself had also experienced three decades of escalating crime rates.

It’s important to note that Bratton faced the same hurdles that any business manager might face, such as:

However, Bratton used the Tipping Point Strategy to turn New York City into one of the safest large cities in the United States. Remarkably, he achieved this in under two years and without a budget increase.

Bratton focused on the resources he did have. Notably, he secured the commitment of key players in the NYPD. Players that could help Bratton mobilise change and turn even the most seasoned pessimists.

This is how Bratton overpowered hurdles to change and in the case of the NYPD, improvement. We can examine his methodology by looking at how he handled each of the four key hurdles common to most scenarios.

The most difficult step in overcoming hurdles is convincing others to agree that problems exist in the first place. The best way of convincing managers of the need for change is in exposing them to the problems firsthand.

After the NYPD was issued with excessively small patrol vehicles, Bratton invited the general manager for a district tour, picking him up in one of the small patrol cars. After two hours with little legroom, the manager understood the problem and Bratton received a fleet of much larger cars.

Even when a critical mass of people understands the need for change, they are often met with resistance from leaders who cite a lack of resources. Instead of losing heart, Bratton decided to make the most of the resources he did have by using them in high impact areas.

Managers who do eventually see the need for change often try to incentivize others to get them motivated. This is a resource-intensive option that takes time and is often not effective.

Bratton instead identified the 76 most influential commanders in his area and interviewed each of them about the area’s performance. This gave him a bigger picture view of how thousands of employees were being managed and why they were so unmotivated to change. Importantly, it helped him create a new culture.

Business politics are best silenced by setting a good example and presenting the relevant personnel with undeniable facts that refute their ways of thinking.

Bratton, now extremely well-informed, used both to overcome the political hurdles endemic to the NYPD.