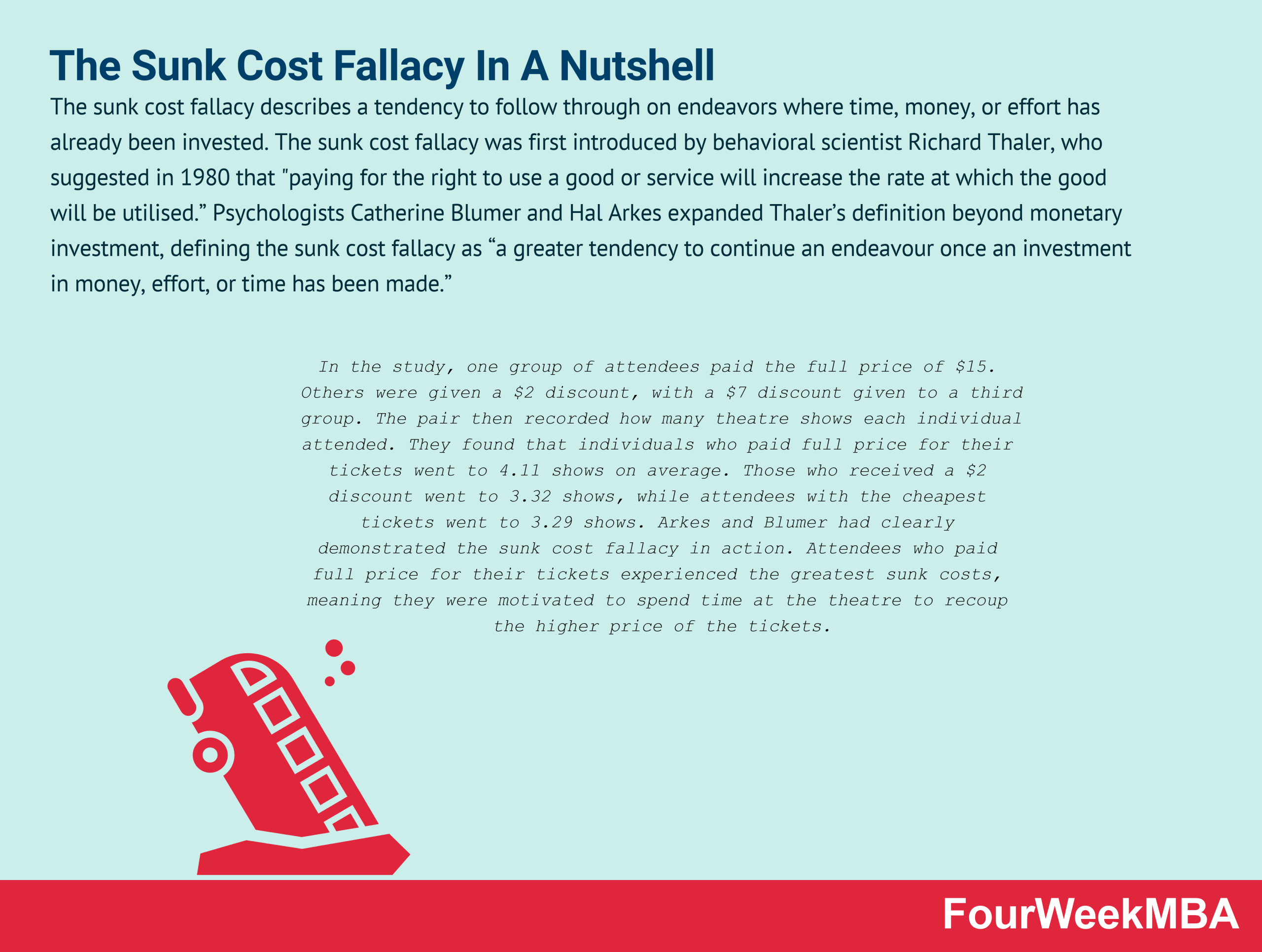 The sunk cost fallacy describes a tendency to follow through on endeavors where time, money, or effort has already been invested. The sunk cost fallacy was first introduced by behavioral scientist Richard Thaler, who suggested in 1980 that “paying for the right to use a good or service will increase the rate at which the good will be utilised.” Psychologists Catherine Blumer and Hal Arkes expanded Thaler’s definition beyond monetary investment, defining the sunk cost fallacy as “a greater tendency to continue an endeavour once an investment in money, effort, or time has been made.”

To test the fallacy in a real-world scenario, Blumer and Arkes conducted an experiment. They decided to sell discounted seasonal tickets at a theatre to determine if the amount of money spent on a ticket influenced the frequency with which people attended.

In the study, one group of attendees paid the full price of $15. Others were given a $2 discount, with a $7 discount given to a third group. The pair then recorded how many theatre shows each individual attended. They found that individuals who paid full price for their tickets went to 4.11 shows on average. Those who received a $2 discount went to 3.32 shows, while attendees with the cheapest tickets went to 3.29 shows. Arkes and Blumer had clearly demonstrated the sunk cost fallacy in action. Attendees who paid full price for their tickets experienced the greatest sunk costs, meaning they were motivated to spend time at the theatre to recoup the higher price of the tickets.

Why does the sunk cost fallacy occur?

The sunk cost fallacy occurs because decision-making is often irrational and based on emotions. Indeed, failing to follow through on a decision can lead to feelings of guilt, remorse, or shame.

The fallacy is also related to commitment bias, or a tendency to remain committed to past behaviors despite those behaviors having undesirable outcomes. By failing to understand that the resources expended will never be recovered, the individual makes decisions based on past costs and not on more rational future costs and benefits.

Lastly, sunk cost fallacy may have some relationship with loss aversion. This is a cognitive bias suggesting that the pain of losing something is twice as powerful as the pleasure of gaining something. As a result, people are more likely to avoid losses than seek out gains. In the context of the sunk cost fallacy, the individual equates a loss with not following through on their decision.

How to avoid the sunk cost fallacy

Making rational decisions by ignoring the investment already made is the best way to avoid the sunk cost fallacy. This is a simple and effective solution on paper, but even the most logical people can be influenced by the fallacy when encountering it in real-world scenarios.

Research has also shown that simply knowing about the fallacy is not enough to avoid its influence. With that said, here are a few ways to avoid the psychological trap of sunk costs: