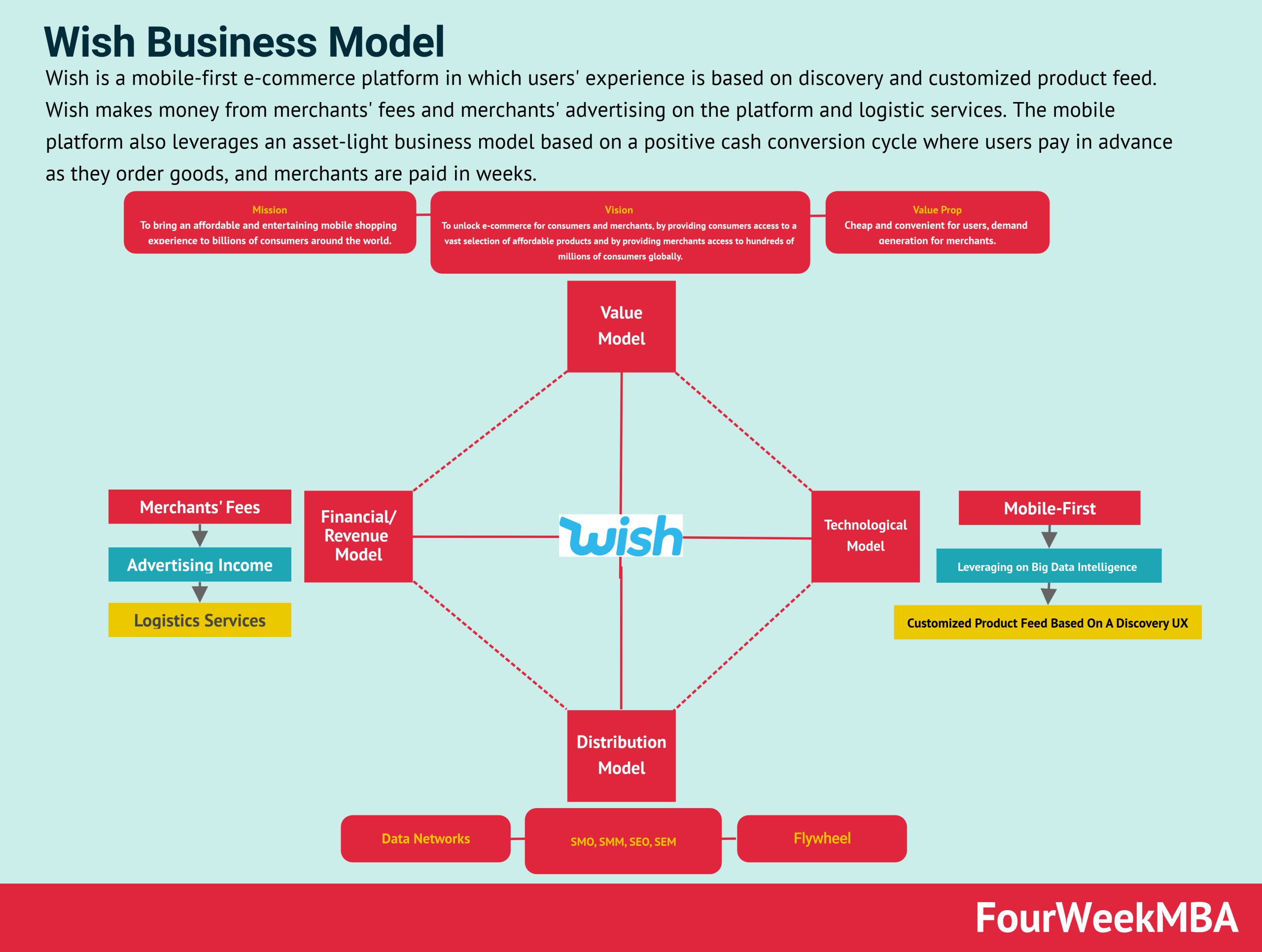 Wish is a mobile-first e-commerce platform in which users‘ experience is based on discovery and customized product feed. Wish makes money from merchants’ fees and merchants’ advertising on the platform and logistic services. The mobile platform also leverages an asset-light business model based on a positive cash conversion cycle where users pay in advance as they order goods, and merchants are paid in weeks.

The framework used for the analysis

The VTDF framework is the basis of the analysis.

Former Google engineer Peter Szulczewski joined the company back in 2004 as an intern, and there he stayed, in the California office until 2007. In 2007, he moved to South Korea, whereas Forbes explains he learned a lesson in how mobile e-commerce looked like. Rather than the clean, minimalist style so much loved in the Valley. Koreans preferred portals crowded with information, which looked more like a bazaar than a temple.

This lesson would prove extremely valuable, as we’ll see to shape Wish’s experience, a mobile e-commerce platform that is all except clean or minimalist, with elements of gamification and personalization all across the platform.

By 2009, Szulczewski, with enough money to live off for a couple of years, coded an application that would match a user with potential product advertising based on the same browser history. He would call “ContextLogic” (which name would stick, as ContextLogic Inc. is the corporation behind Wish).

By 2010, Szulczewski would get the first round of investment from Yelp CEO Jeremy Stoppelman. Yet, the idea at the beginning was all about advertising and how to track users at the point of offering a customized advertising experience and potentially compete with Google.

Only afterward, by 2011 Szulczewski, had his friend Zhang join as co-founder, he would shift focus toward mobile e-commerce. And the idea didn’t seem that great, given that would mean competing with giants like Amazon.

By 2011, as Szulczewski got an offer from Facebook‘s Zuckerberg to buy its technology, ContextLogic, for $20 million, as reported by Forbes, Szulczewski refused the offer, which upset investors and risked putting an early end to his venture.

Then by 2011, the embryonic version of Wish, which at the time was called Wishwall.me, was born. Indeed, this worked as a wish list where users could flag the products they wanted (which Wishwall.me didn’t have yet but only showed) and build up a sort of list where they would earn rewards. To gain traction quickly, the platform didn’t ask for commissions to merchants, but only to reduce their price for them so that users could get rewarded with discounted products.

The idea seemed to be taking traction. Over the years Wishwall.me which transitioned to become Wish, got over $2 billion in funding and evolved to become a mobile e-commerce platform with elements of gamification, Where e-commerce platforms, like Amazon had been built with the promise of fast delivery and a balance between cost and convenience, Wish had built a name (sometimes even a bad name) for cheap stuff, mostly from Chinese merchants, often delivered within weeks.

And yet it turned into a multi-billion dollar platform, and now to scale further, of course, it’s tackling the problem of preventing bad merchants on the platform as it scales further.

Wish has a simple mission—to bring an affordable and entertaining mobile shopping experience to billions of consumers around the world.

The whole point of Wish then is about democratizing mobile commerce by making it affordable and accessible to anyone.

The two key stakeholders for the platform are consumers and merchants.

As of 2020, Wish counted over 100 million monthly active users, which worked as an attractive option for merchants to sell their products. In addition, Wish also offers a set of tools to those merchants to grow their business through Wish.

Six Forces Model And Why It Matters In Business

The Six Forces Model is a variation of Porter's Five Forces. The sixth force, according to this model, is the...