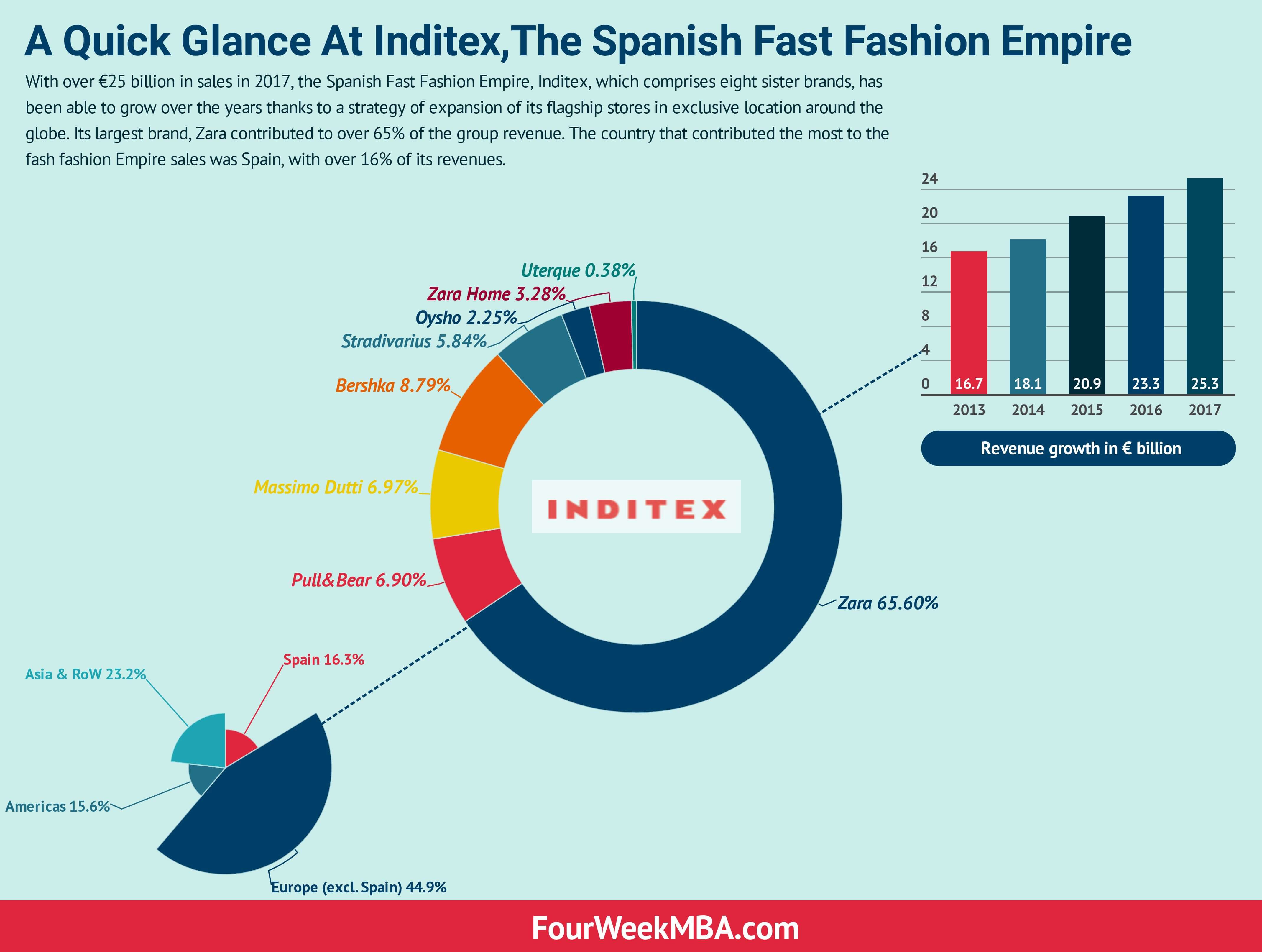 With over €25 billion in sales in 2017, the Spanish Fast Fashion Empire, Inditex, which comprises eight sister brands, has been able to grow over the years thanks to a strategy of expansion of its flagship stores in exclusive location around the globe. Its largest brand, Zara contributed to over 65% of the group revenue. The country that contributed the most to the fash fashion Empire sales was Spain, with over 16% of its revenues.

Inditex is the holding that controls a set of brands, among them, Zara, one of the dominating brands in the fast fashion industry. In 2017, Inditex comprised eight brands:

The holding, Inditex, continued to focus on commercial initiatives to grow the value of each brand, to expand its stores worldwide and to build up the e-commerce platforms. Let’s have a quick overview of each brand part of the Inditex Holding.

Zara is by far the largest brand of the group, which in 2017 made over €16.5 billion in sales and it represented over 65% of the net sales of the group. With its massive flagship stores around the world (Madrid, Venice, Mumbai and many others) Zara created a large recognized brand in the fast fashion industry. The company also extended its online presence in Southeast Asia and launched http://www.zara.com in Malaysia, Singapore, Thailand Vietnam, and in India. With

Pull&Bear with its over €1.7 billion in net sales represented almost 7% of the net sales of the group. The company has also opened up new flagship stores in exclusive locations around the world (like Rue de Rivoli in Paris, Ermou in Athens, and One World in Bangkok).

Massimo Dutti made over €1.7 billion in net sales, which represented about 7% of the net sales of the group. The company expanded with its new stores in Valencia, Milan. Just like Zara flagship stores, Massimo Dutti position itself in exclusive locations, but with a minimalist interior design to convey a different style, compared to the sister brands.

After Zara, Bershka is the largest of the sister brands in terms of sales, in 2017. Indeed, the company made over €2.2 billion, and it represented almost 9% of the total group sales. Just like its sister brands, Bershka also collaborates with influencers to enhance its brand awareness. Like the campaign with the Italian rapper, Fedez (Fedez for Bershka). The company also expanded its operations by opening up pop-up stores in New York and Rome.

Stradivarius made almost €1.5 billion in 2017, which represented about 6% of the group total sales. Like its sister brands, the company has inaugurated a new flagship store in Barcelona.

With a turnover of almost €570 million, Oysho represented over 2% of the net sales of the group. The Spanish clothing retailer of in women’s homeware and undergarments expanded by bringing its store to Barcelona, Madrid, Milan, Doha, Moscow, Paris, Tunisia, Istanbul, Dubai, and Bali.

With €830 million in revenues, which represented over 3% of the group net sales, the company opened its first stores in Armenia, Belarus, Israel, the Czech Republic, and Tunisia.

Uterqüe focused in manufacturing fashion accessories, and garments made €97 million in 2017, which represented less than 1% of the group total sales. The company launched its first collaboration with Pablo Thecuadro, and it opened its flagship stores in Barcelona and Madrid.

Inditex group core values can be summarized in:

The principal partners of the group are:

Inditex follows an integrated model, where the customer journey is driven across several channels, but with a continuous dialogue, from store to online channels, Inditex creates multiple touchpoints with its brands.

Coca-Cola Vs. Pepsi: Who Has The Best Business Model?

Both companies have massive scale. With Coca-Cola over $35 billion revenue, compared to PepsiCo over $63 billion. Where Coca-Cola has...