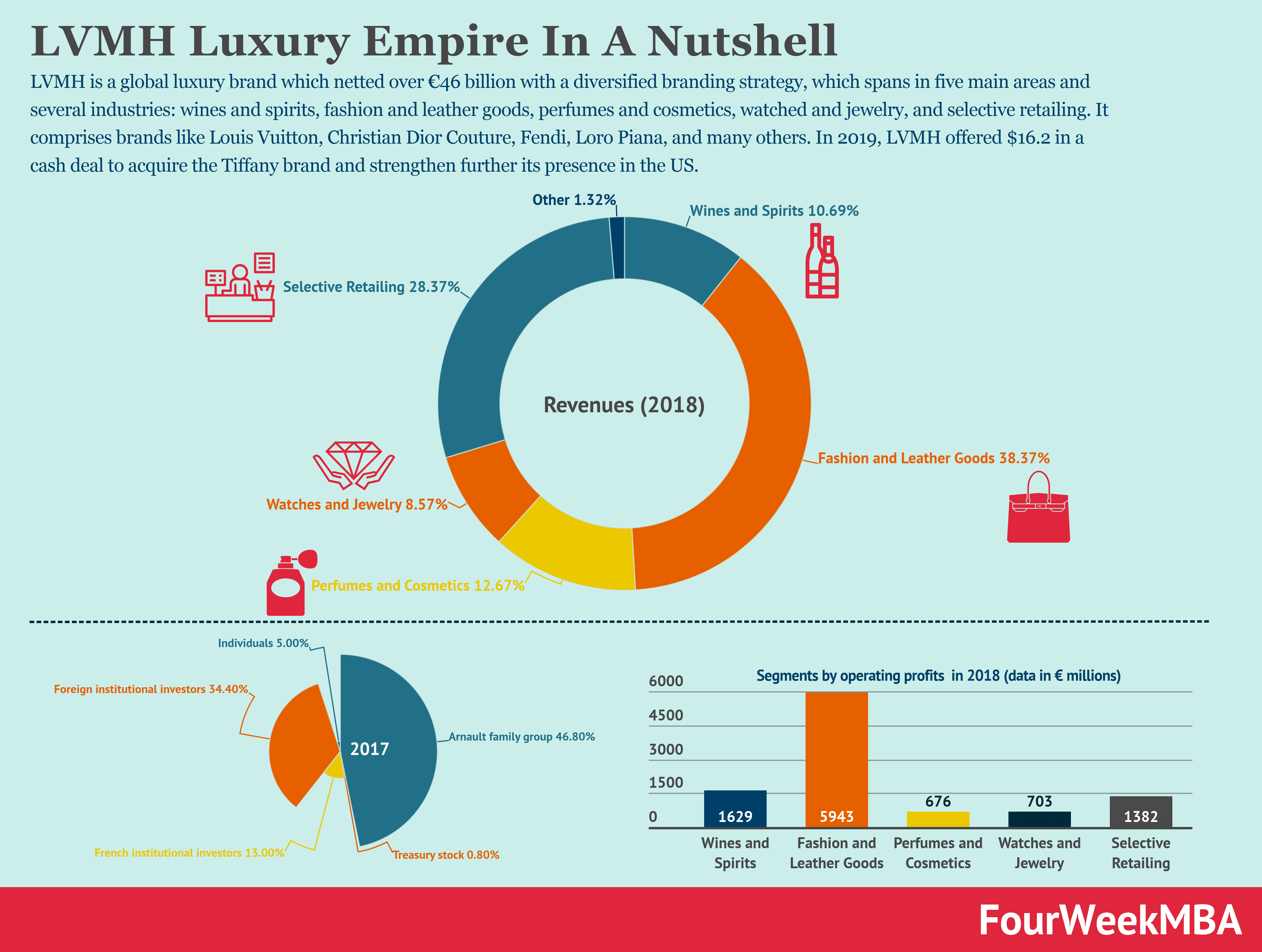 LVMH is a global luxury empire with over €46 billion in revenues for 2018 spanning across several industries: wines and spirits, fashion and leather goods, perfumes and cosmetics, watches and jewelry, and selective retailing. It comprises brands like Louis Vuitton, Christian Dior Couture, Fendi, Loro Piana, and many others.

It all started when the young Bernard joined the father’s company, which primarily focused on construction. Yet when Bernard Arnault joined the company in 1971, the company began to focus on real estate. Ever since Bernard Arnault grew to become CEO and then drove the father’s company through a series of deals that brought to the creation of LVMH. Today LVM is the largest luxury empire on the globe. Comprising brands like Fendi, Luis Vuitton, and many others.

As clarified on its code of conduct the mission of the company can be summarized in three fundamental values:

Deliver excellence: because LVMH embodies the world of craftsmanship in its most noble and most accomplished form, we pay meticulous attention to detail and to perfection. We never compromise on quality. From products to service, we cultivate our difference through this constant quest for excellence;

Cultivate an entrepreneurial spirit: LVMH has an agile and decentralized organization that encourages efficiency and responsiveness. It stimulates individual initiative by entrusting each person with meaningful responsibilities. Our entrepreneurial spirit encourages both risk-taking and perseverance. It requires pragmatic thinking and an ability to motivate teams, leading them to achieve ambitious objectives.

For a large group that has been able to scale up by keeping its brands highly profitable, setting up ethical principles might be as important as setting up financial metrics. In fact, when it comes to the luxury industry, the strength of the brand plays a key role. However, it is critical to making the brand grow together with a strong foundation. In the case of LVMH, this foundation is represented in its code of conduct as a set of principles

Around those seven principles, a set of actions are developed and assessed to keep those principles as the guidelines for the company’s ethical growth.

The Arnault Family has managed to

When you think of LVMH the brands that comprise the name (Louis Vuitton, Moet Hennessy). However, the LVMH group is a galaxy of luxury brands and Maisons, acquired throughout the years by the development and growth campaign of Bernard Arnault.

Although those Maisons are part of an ecosystem, they are also autonomously run. Thus, each of those Maisons is based on a business model that is unique to the brand.

This kind of organization based on decentralized operations makes the brands part of the LVMH galaxy agile. So that each brand can be connected to its customers, can make decisions fast and still allow its employees to have an entrepreneurial mindset.

In terms of operations the company comprises five main segments:

In terms of profits breakdown the wines and spirits segment is among the most profitable. As shown on LVMG annual report:

What brands are part of the wines and spirits?

This segment includes fashion luxury brands such as Christian Dior Couture, Rimowa, Louis Vuitton, Kenzo, Givenchy, Loro Piana, and Fendi. The business group’s operating margin as a percentage of revenue represented the 31.7%. Together with the wines and spirits that is the most profitable segment.

Perfumes and Cosmetics contributed to 600 million euros, to the overall company’s net profits. This growth came from Parfums Christian Dior, Kendo, and Parfums Givenchy. It comprises brands like:

The Watches and Jewelry contributed 512 million euros in profits. With brands like Bvlgari and Hublot, this is a critical part of the overall group. It also has a profit margin of 13.5%. Within this segment there are several brands:

Profit from Selective Retailing was 1,075 million euros. Within these segments there are brands like:

What is the fastest growing segment?

According to the 2018 annual report, the fastest-growing segment is Fashion and Lether Goods. As explained in its financial statements the “very solid momentum achieved by Louis Vuitton and Christian Dior Couture, as well as by Celine, Loro Piana, Kenzo, Loewe, Fendi and Berluti, which confirmed their potential for strong growth.”

What is the most profitable segment?

Where does LVMH make more money?

France remains the most significant country and the market for LVMH. As the country where LVMH has its home, France also represents an important market for the company, which keeps generating 10% of its revenues. Other markets like the United States and Japan are pretty important too.

France is also the country where most of LVMH stores are located. Even though way smaller than the US market, France counts about 508 stores.

The luxury empire with agile distribution and decentralized management

One of the critical ingredients of LVMH success is based on its ability to let the Maisons be rung separately while the operations of each are kept agile. This allows the company to be quick at understanding the customers. Also, each mature brand will be used as a cash cow to finance the development of new and less mature brands.

In November 2019, LVMH reaches a deal to purchase Tiffany for over $16.2 billion, which deal would officially close in 2020. This deal gives the opportunity to LVMH to consolidate its empire also within US territory.

That is how a former construction company became a global luxury empire!

The Top 7 Benefits Of Writing A Book

Competition for attention is fierce. Your company needs a new, sustainable channel for exposure to build a viable business model....