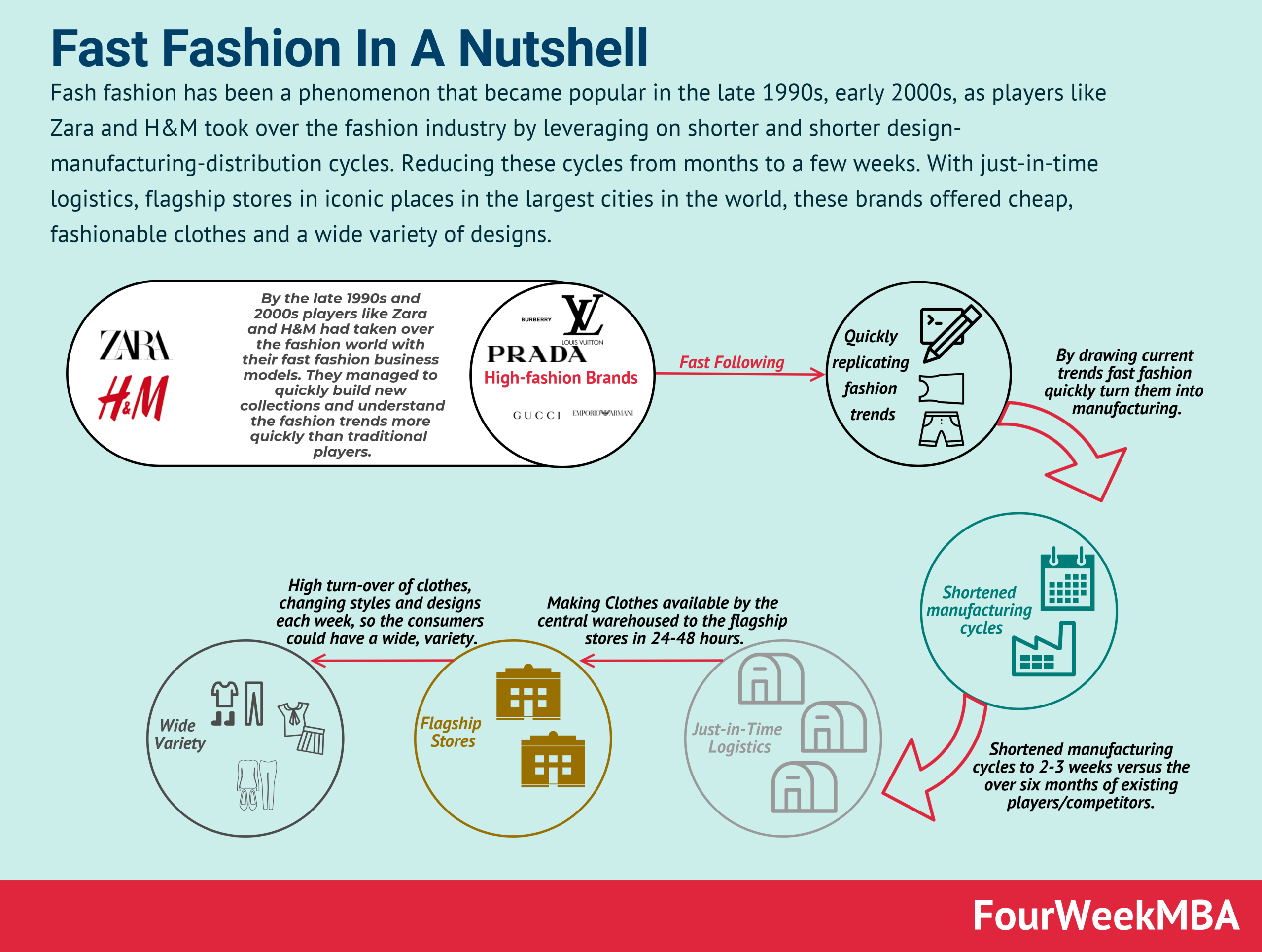 Fash fashion has been a phenomenon that became popular in the late 1990s, early 2000s, as players like Zara and H&M took over the fashion industry by leveraging on shorter and shorter design-manufacturing-distribution cycles. Reducing these cycles from months to a few weeks. With just-in-time logistics, flagship stores in iconic places in the largest cities in the world, these brands offered cheap, fashionable clothes and a wide variety of designs.

Fast fashion players took over the industry around the late 1990s and the early 2000s; those players like Zara and H&M “innovated” in a few ways. The core strength of the fash fashion industry relied on the replication of trends from high-fashion designers. Thus turning these trends into clothes and making them readily available in most retail stores located in central, iconic places in the largest cities across the world.

Zara had mastered this model. Its strength relied on a few key elements.

By quickly replicating designs, Zara initially didn’t innovate in these terms. Instead, it copied fashion trends. Therefore, it fast followed the existing trends created by high-fashion players. The key here was quickly turning these trends into clothes available in its stores.

Here being quick meant reducing the time it took to bring to manufacturing clothes, as previously it took months.

Zara also had mastered quickly and cheaply manufacturing its clothes to achieve extreme speed by mass manufacturing them. Where competitors or existing players took six months to turn the design into clothes available at the store, Zara took this to another level, shortening the design-manufacturing cycle to as low as 2-4 weeks.

Mass distribution and logistics: Another key element of this strategy was making logistics a core competency of Zara. As these clothes could be easily made available in all its stores. By leveraging a “just-in-time” process, Zara distributed clothes across the stores from its central warehouses (perhaps in Spain), making the clothes available within 48 hours in any of the European stores.

High turnover: Another key element of Zara’s strategy was the high turnover of clothes. In short, each week, fashion shoppers could find different styles of clothes, thus creating a sort of addicting shopping mechanism, where you could go shopping with more and more frequency.

From Fast Fashion To Real-Time Retail

As the 2010s brought many more people online across the world, the fast fashion phenomenon became even more rapid, thus giving rise to the ultra-fast fashion first, then to real-time retail.