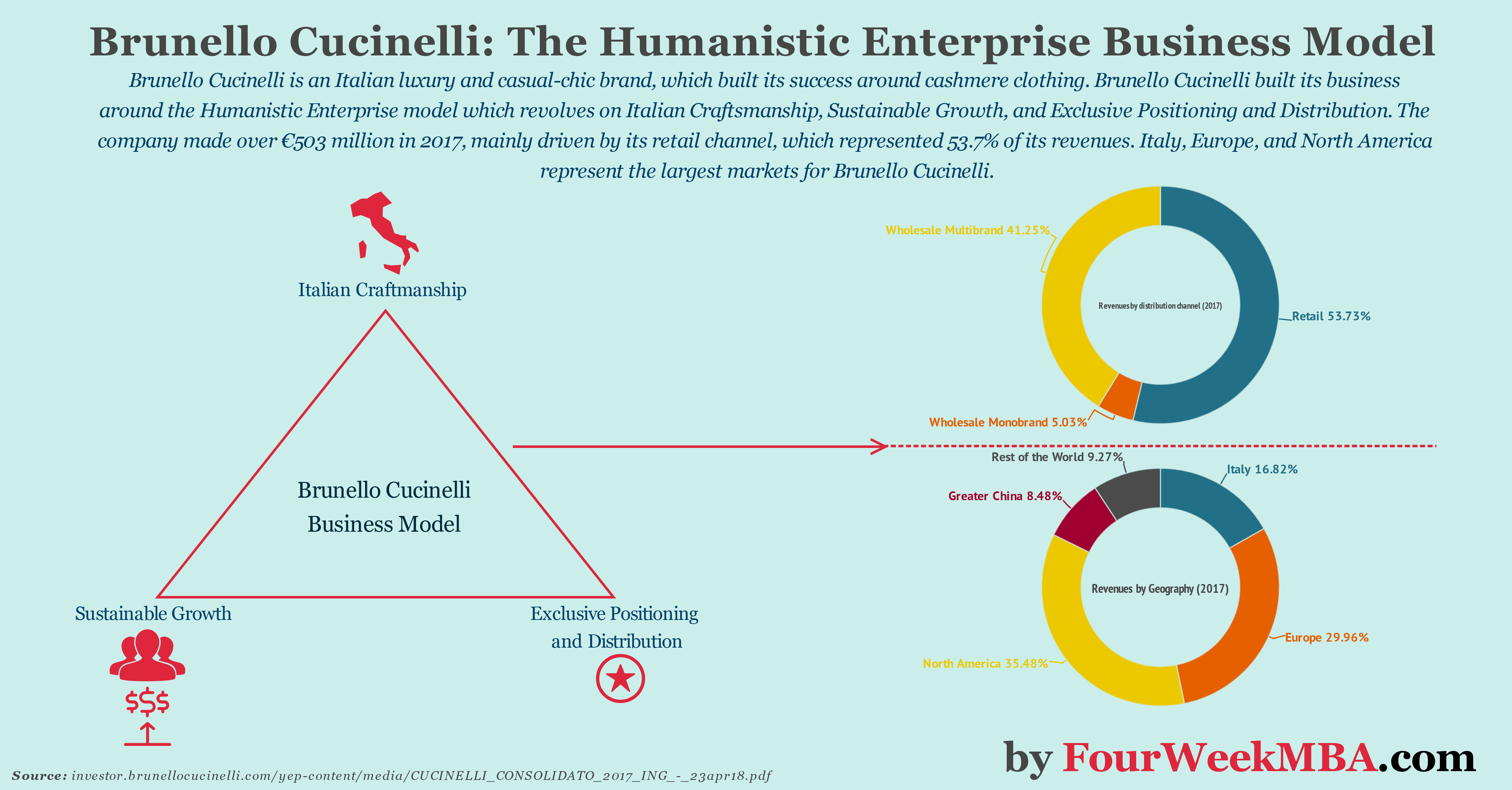 Brunello Cucinelli is an Italian luxury and casual-chic brand, which built its success around cashmere clothing. Brunello Cucinelli built its business around the Humanistic Enterprise model which revolves around Italian Craftsmanship, Sustainable Growth, and Exclusive Positioning and Distribution. The company made over €503 million in 2017, mainly driven by its retail channel, which represented 53.7% of its revenues. Italy, Europe, and North America represent the largest markets for Brunello Cucinelli.

Brunello Cucinelli is more of a philosopher than an entrepreneur. When I met him I was surprised by his sharpness of thought, which I suspected came from a sort of life/philosophical framework he had developed throughout his life. I then found out that the framework was built around philosophers and men of actions, like Socrates, Alexander the Great Marcus Aurelius and Saint Benedict,

If at all, Cucinelli started his entrepreneurial journey with a mission: to preserve and improve human life via craftmanship. Therefore, his attempt to build a company based on those principles is more of a way to show to the world that philosophy is a critical thinking tool.

Just like the ancient philosopher, Thales (about 2,600 years ago) showed to the world he could make a lot of money with his philosophy. Brunello Cucinelli will probably be remembered as the modern version of a philosopher turned entrepreneur.

This is not to say that philosophy should be looked at with a utilitarian view. Quite the opposite, whatever road you decide to take philosophy might be a powerful thinking tool that will be worth developing independently from the financial returns it might give you in the real world.

In 1978 Brunello Cucinelli started as a cashmere producer. Today Cucinelli is among the most established brands in luxury and casual-chic brands. The main focus of Cucinelli is on the hand-crafted attention to detail and creativity.

The center of the Humanistic Enterprise is the small town of Solomeo, the 14th-century hamlet outside Perugia, home to 400 inhabitants. The company headquartered in a castle is surrounded by a few medieval houses used as workshops. Just like Google has built its innovations labs around the Googleplex,  Cucinelli has developed its success around the small medieval town of Solomeo.

Brunello Cucinelli mission and its code of ethics

I believe in a humanistic enterprise: business should comply in the noblest manner with all the rules of ethics that man has devised over the centuries. I dream about a form of humanistic modern capitalism with strong ancient roots, where profit is made without harm or offence to anyone, and part of it is set aside for any initiative that can really improve the condition of human life: services, schools, places of worship and cultural heritage.

This mission revolves around a few simple principles in its code of ethics:

In conducting its business, the Company acts in a manner compliant with all laws and regulations in force in the territories in which it operates, as well as with the Code of Ethics and Company procedures, which it applies with integrity and equity.

The Company guarantees the confidentiality of the personal information and data it processes and the protection of information obtained in regards to professional services rendered.

The Company undertakes to provide all stakeholders with a clear and transparent account of its situation and performance, without favouring any group of interests or individual.

The Company operates on the Italian and international market in the sale of cashmere knitwear, articles of apparel in leather and other materials, and accessories, and engages in fair competition in the marketplace, complying with Italian and European principles and laws protecting competition.

The Company undertakes to promote respect for the physical and cultural integrity of individuals and respect for interpersonal relations. It guarantees working conditions that are respectful of individual dignity and safe working environments and safeguards and promotes the value of human resources, all with the aim of improving and increasing the wealth of skills possessed by each employee.

Dealings with the Company’s stakeholders are guided by the principles of propriety, cooperation, loyalty and mutual respect. External relations and employee relations are shaped by the utmost sense of loyalty, which consists in acting with a sense of responsibility.

The Company undertakes to be attentive to the market’s changing needs and to constantly improve the quality of its products.

The Company contributes constructively to environmental sustainability in all of its activities. The commitment to safeguard the environment is put into practice by planning activities that seek a balance between economic initiatives and essential environmental needs in accordance with applicable Italian and international directives.

In its operations, the Company takes account of the needs of the community in which it conducts its business and contributes to promoting quality of life as well as economic, social, cultural and civil development.

Cucinelli has a diversified distribution strategy based on three main channels:

If there are a few words that define Brunello Cucinelli brand, those can be summarized in five main words, adjectives and one action:

Those traits together contribute to the long-term vision of Cucinelli growth.

What financial metrics does Cucinelli use to assess its business success?

Once you have down the mission, vision and the main traits of your brand. It is critical to have a few financial metrics to be able to assess at a quantitative level how the business growth is progressing.

For that matter, as indicated within the Cucinelli annual report, those metrics are summarized below:

Brunello Cucinelli business model revolves around three distinctive elements that make up for the company’s DNA. It all starts from the Italian Craftmanship, intended as “Manufacture through highly specialized artisanal laboratories, all of which are based in Italy, and most are located very close to the company in Umbria.“

In a global economy that has stressed so much outsourcing and lowering the cost of manufacturing to countries like China and India, to reduce the cost of production, Cucinelli has built an alternative model.

This model is built on sustainable growth (profits and people come together) and an exclusive positioning (top end of the luxury segment) and distribution strategy (based on mono-brand boutiques in the main luxury streets and to prestigious multi-brand boutiques and Luxury Department Stores).

My personal take on Brunello Cucinelli

When I met Brunello Cucinelli, I saw this man, standing six foot tall, light brown hair, with broad, intense dark eyes. He dressed in an elegant dark-beige double-breasted coat, light classic beige pants, immaculate white shirt (no tie) and a white handkerchief placed in his patch pocket (in line with the Italian tradition). Cuccinelli’s elegance and love for esthetic are clear; however, the most striking thing about this man is humanity together with warmth, and openness.

In 2015 at the “Meeting,” an event hosted each year in Rimini, people surrounded him. Yet he didn’t seem to bother at all. On that occasion, I asked him about a book that really made a difference in his life and leadership style. Cuccinelli’s answer?

When I asked him to tell me more about that book, he continued

“Those are diaries written by the wise Roman emperor during very difficult times.”

At the time Brunello Cucinelli’s answer struck me. I could not reconcile how a man of action, an entrepreneur that founded the homonymous enterprise, Brunello Cucinelli SpA (worth more than one billion dollars at current prices) could suggest the diaries of a philosopher. Was there something missing?

When I investigated further, I realized that it made perfect sense. Although a philosopher, Marcus Aurelius was a man of action. Among the wisest emperors of the Roman Empire, Marcus Aurelius spent his life defending the northern borders of the Empire against attacks from barbaric populations.

Marcus Aurelius‘ diaries are thoughts and meditations that helped him during those bloody conflicts. His meditations are part of a broader philosophy of life, called Stoicism, which was first elaborated in ancient Greek as a mix between Epicureanism and cynic doctrines. The new stoic philosophy had an aspect that other philosophies lacked.

(Roman) Stoics believed in destiny and the fact that each man should take action in favor of humanity. Therefore, the philosopher is not the individual detached from reality. But rather a man of action that although dislikes material things, does not retreat from helping his fellow humans.

Brunello Cucinelli founded his company in a medieval town, Solomeo (436 residents as of 2001), located in Umbria (central Italy), in 1985. Cucinelli called his company a “Humanist Enterprise,” meaning a company, which puts humanism at the center of all.

In a modern capitalist society still inspired and driven by figures such as Ford and Carnegie, workers became an extension of machines. A cost to cut as much as possible. Brunello Cucinelli proposed an alternative way to look at capitalism;

He calls that “Ethical Capitalism.” Not surprisingly Cucinelli created in the same medieval town a foundation and a school with the main aim of providing support to artistic, humanist and craftsmanship traditions.

Cucinelli affirmed during his speech at that event,

“Each man has a quantity of genius inside and our role as entrepreneurs is to make that genius come up.”

The evidence that Cucinelli practices what he preaches came in 2012 (back then Italy was experiencing a severe recession) when he distributed €5mln ($5.5mln) to his employees. It meant an increase of €6,385 (almost $7,000) for each employee. As Cucinelli puts it

“Profit itself doesn’t mean anything if it is not supplemented by the betterment of the human condition and the personal growth of our employees.”

Is the Humanist Enterprise finally gaining ground? This is a business model that challenges the common view that business is just about profits.

There is no doubt that profits are an important building block for any business model to be successful. It is also true that financial building block needs to be balanced against other blocks, such as value proposition and key partners that make the business successful in the long run.

How to Write Incredible Content With The Inverted Pyramid Style

Has your inspiration abandoned you? Do you have a writer's block? We have a solution! If you are in search...