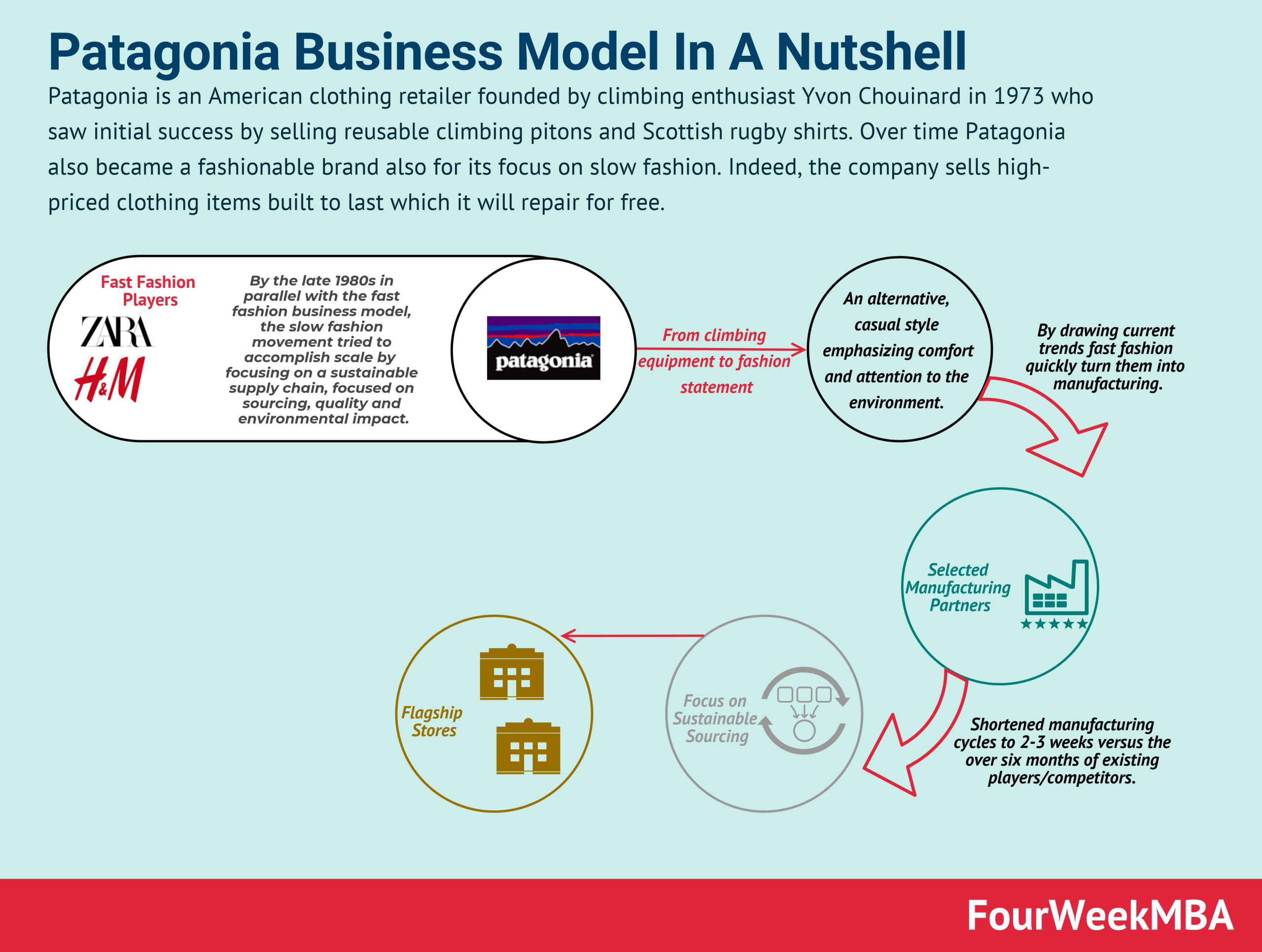 Based in California, the company was founded by climbing enthusiast Yvon Chouinard in 1973. Chouinard began rock climbing in 1953 as a 14-year-old member of the Southern California Falconry Club. His passion was instilled in him by the leaders of the club who taught him how to rappel down cliffs to view falcon nests.

As he grew older, he met members of the Sierra Club who would regularly meet in Yosemite. Chouinard was also an environmentalist who wanted to climb without leaving his equipment embedded in the rock face. He figured that a reusable piton was the answer, but no such product existed on the market. So he decided to design and then produce one himself, using an old coal-fired forge salvaged from a junkyard.

The reusable pitons were a hit in the climbing community, so Chouinard began selling them under the company name Chouinard Equipment. By 1970, Chouinard had become the largest supplier of climbing hardware in the United States.

Patagonia then began selling rugby shirts, bivouac sacks, gloves, hats, and mittens after Chouinard returned from a climbing trip to Scotland. The first store opened in 1973 in Ventura, California as the company shifted to developing innovative activewear made from synthetic fibers with an environmental slant. Further expansion of the product line saw Patagonia branch into sleeping bags, camping gear, surfwear, athletic equipment, and backpacks.

Today, Patagonia has annual revenue of approximately $1 billion with more than 50 stores globally.

Patagonia makes money by manufacturing and selling clothing to consumers for a profit.

However, the company is unique among its peers. It enjoys high brand equity but encourages people not to buy its clothing despite remaining a for-profit organization.

Let’s take a look at how these values help the company make money.

Patagonia sells high-quality, long-lasting clothing to consumers. While profit margins on individual items are higher, the company does not subscribe to the planned obsolescence strategy used by many clothes retailers today.

To further its environmental values, Patagonia also holds regular Worn Wear events across the US where customers receive free help repairing old clothing. Alternatively, shoppers can pick an item from a selection of pre-worn clothing and fix it themselves. These events solidify the connection between Patagonia and its target audience. It also assures customers that their warranties will be honored.

Through its advertising campaigns, Patagonia believes that less is more. In other words, it actively encourages consumers to buy less clothing.

The Patagonia Common Threads Initiative advocates sustainability and anti-consumerism, with a message on the company website stating that “We design and sell things made to last and be useful. But we ask our customers not to buy from us what you don’t need or can’t really use. Everything we make – everything anyone makes – costs the planet more than it gives back.”

Patagonia is also famous for its “Don’t Buy This Jacket” campaign as a way to push back against sales such as Black Friday and encourage consumers to be more thoughtful about their purchases.

Patagonia became a Benefit Corp (B-Corp) almost as soon as it was possible to do so in California.

A B-Corp is a socially and/or environmentally responsible company that can write associated values into their articles of incorporation. In more general terms, Patagonia is accountable for metrics beyond just profit and loss.

To that end, Patagonia donates 1% of total revenue to charities promoting conservation and sustainability. It also makes the manufacturing and distribution footprints of its operations freely available online.

This certification increases operating costs and certainly reduces revenue, but embodying these values helps Patagonia resonate with a target audience who then become more motivated to purchase Patagonia products.

Revenue modeling is a process of incorporating a sustainable financial model for revenue generation within a business model design. Revenue...