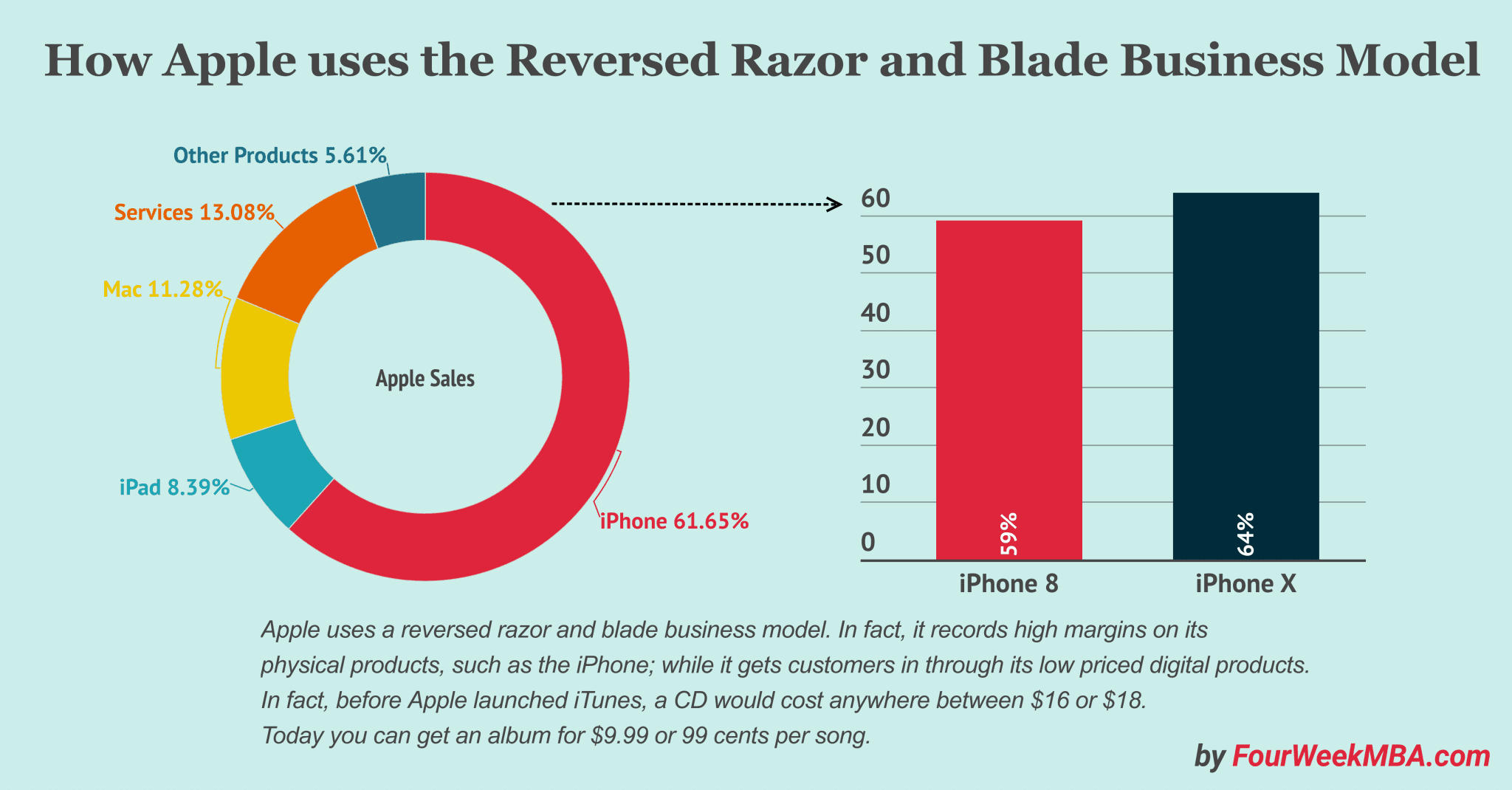 The razor and blade business model is a strategy that relies on selling what is supposed to be the primary product at a low price or given away for free; while complementary goods get sold at high margins. For instance, Gillette’s razor would cost a few bucks. Instead, a set of blades will be 3-4 times more expensive. Companies like Apple, instead, follow a variation of that, called reverse razor and blade where the core product (the iPhone) is sold at wide premium, and the ancillary products/services (apps) are mostly free, or inexpensive.

Apple and the reversed razor and blade business model

If you ever bought an iPhone, you’re aware of the fact that it can cost as much like a computer. In fact, Apple rather than decrease its prices overtime is actually uses the opposite strategy. In fact, the latest confirmation of this strategy comes from the iPhone X, which has an even higher margin compared to the iPhone 8. As reported by reuters.com:

In short, In this case, the iPhone is the blade. What is the razor then? That is the iTunes or the set of digital products Apple made available through its store. In fact, when Apple launched iTunes, a CD would cost anywhere between $16 or $18. Today you can get an album for $9.99 or 99 cents per song.

In fact, as reported by billboard.com:

Steve Jobs “said to us, ‘There’re two things you have to accept: 99 cents for every single song, and every song has to be sold as a single.’ And we went home and swallowed hard because that was tough for us to accept for us as a music industry…. If certain songs were really popular we should be able to set the price at whatever we thought was the right price as opposed to the $1 price. Steve said, ‘You know, you’ve got to keep it simple, you’ve got to keep it clean.’”

The razor blade business model, also known as the razor-razorblade model, involves selling a product at a lower price to then selling a related product later for a profit. The razor and blade business model has been popularized by King C. Gillette, founder of safety razor company Gillette, which sold a durable razor at cost while selling disposable blades at a premium.

The razor blade business model describes the strategic positioning of one product as free or complimentary to boost sales of a dependent product that generates revenue.

The model is often attributed to King C. Gillette, founder of safety razor company Gillette. The entrepreneur reasoned that if he could sell consumers a durable razor handle for very little, he could sell the disposable replacement blades at a premium price.

The company reaped the rewards of Gillette’s strategy since the expensive blades needed to be replaced constantly. What’s more, the consumer had no choice but to purchase them as they were the only blades that were compatible with the razor handle. The strategy was such a success that current owner Proctor & Gamble continues to use it today.

The razor-blade business model intends to avoid competition by offering a free or low-cost product in the first instance – even if the business must incur a loss. Once customer loyalty has been attained, the company has an easier time selling them more profitable products.

Note that the razor-blade model is similar to the freemium model, where digital products and services are offered for free under the expectation that a consumer will pay for features at some future point.

Aside from razor blades themselves, there are many other brands in different industries utilizing this business model.

Let’s take a look at a few of these below:

The benefits of the razor-blade business model for businesses are well stated. But there do also exist some limitations:

What is the reverse razor blade model?

The reverse razor blade model involves a business attracting consumers with a premium product and then selling them less expensive products over time.

As the name may suggest, the reverse razor blade model is an inversion of the razor and blade business model made popular by The Gillette Company.

Apple was an early proponent of the reverse razor blade model, selling its iPod as the dependent product and songs from the iTunes store as the consumable product. Similarly, consumers who purchase an Apple Mac receive access to the Mac operating system and office software free of charge. To some extent, the reverse approach helps Apple offset its expensive products and the fact that the company rarely offers discounts.

Amazon is another company that utilizes the reverse razor blade model, selling its Kindle e-readers to give consumers access to a vast library of book titles.

Advantages and disadvantages of the reverse razor blade model

Let’s now take a look at some of the pros and cons of this business model.