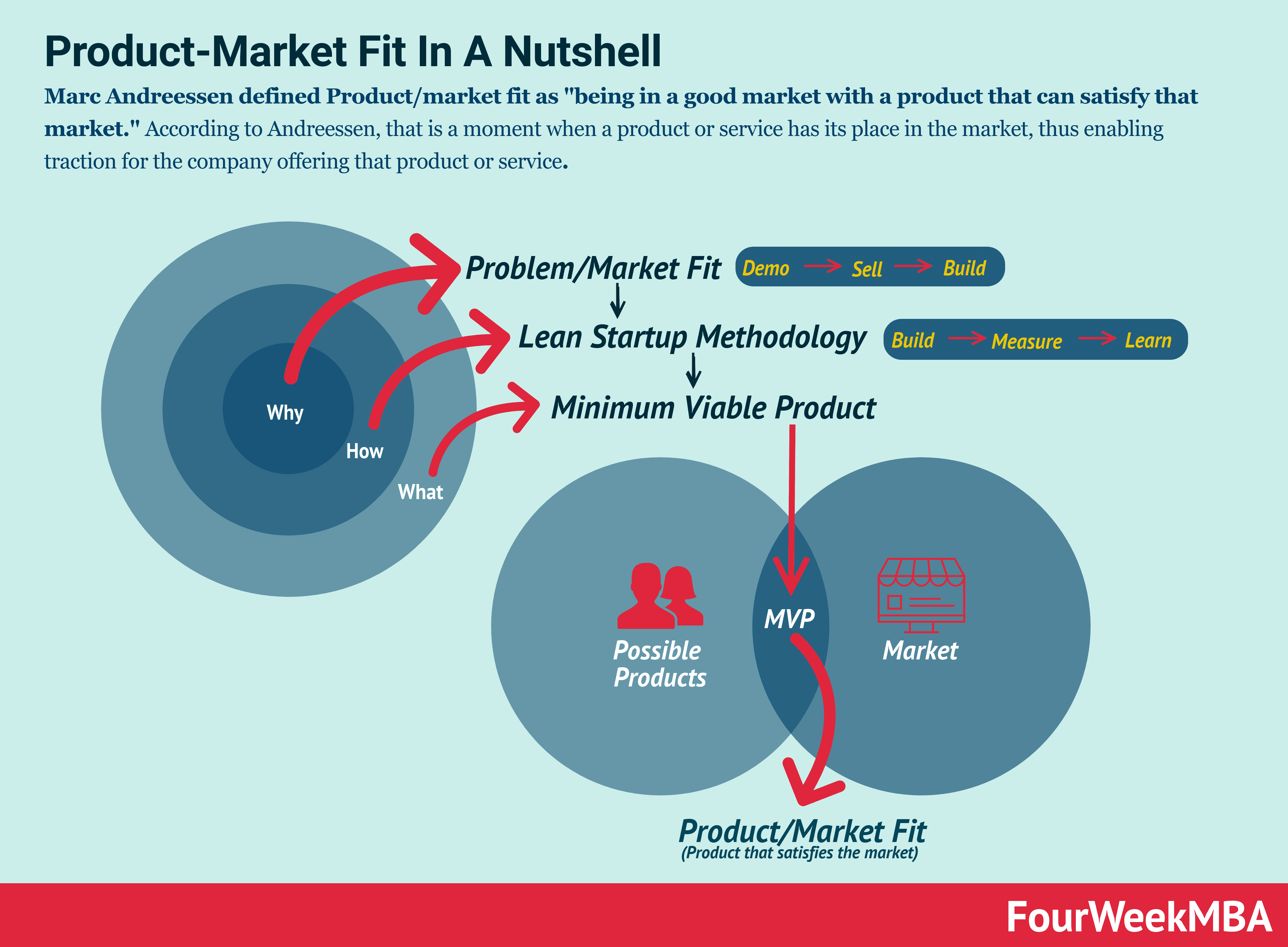 Who coined the term product-market fit?

Andy Rachleff who cofounded the firm Benchmark Capital, and also a cofounder and CEO of Wealthfront in an interview with Mike Maples explains the origin of the term. As Andy Rachleff explained:

I learned it from Sequoia Capital. Don Valentine really invented it.

Don used to say, “I’m looking to invest in companies that can screw everything up and still succeed because the customer pulls the product out of their hands.”

I’m paraphrasing. I’m not sure I got that exactly right. He felt that way because the startup will screw everything up. I want a company that has such demand from the market that they can literally screw everything up and still succeed.

Who popularized the term “Product-Market Fit”?

In an article entitled “The only thing that matters” Andreessen popularized the term:

In other words, Andreessen takes into account three major factors for the success of any startup:

He argues that if you asked Entrepreneurs and VCs of the three elements what mattered the most, they would have picked the team.

On the other hand, if you asked engineers about the most crucial element, they would argue that the product matters the most (Andreessen mentions Apple and Google as an example of that).

He takes a third path though. Rather than the team or the product, what matters is the market!

In a great market — a market with lots of real potential customers — the market pulls product out of the startup.

From here he introduces the concept of MVP or minimum viable product.

He defined it as:

The market needs to be fulfilled and the market will be fulfilled, by the first viable product that comes along…

…The product doesn’t need to be great; it just has to basically work. And, the market doesn’t care how good the team is, as long as the team can produce that viable product.

From here it is essential to understand two concepts that help startups and entrepreneurs in general to launch successful products:

We’ll also see a third element which has become critical even before an MVP can be developed: the problem/market fit.

The Lean Startup Methodology in a nutshell

Steve Blank, launched the Lean Startup Movement, which as he explained in a 2013 HBR article “Why the Lean Start-Up Changes Everything” defined it as:

It’s a methodology called the “lean start-up,” and it favors experimentation over elaborate planning, customer feedback over intuition, and iterative design over traditional “big design up front” development.

In a nutshell, the lean startup methodology aims at creating a repeatable process for product development to minimize the time it takes to build a product that the market wants.

This process consists of three phases:

Once you go through the build > measure > learn that will need to be repeated over and over, thus creating a virtuous cycle or feedback loop.

Steve Blank also highlights a few core principles at the core of the lean startup methodology:

Thus, the primary purpose is to come up with a minimum viable product (MVP) which helps companies reduce the time to market.

For that matter, it is essential to understand what’s an MVP.

The Minimum Viable Product in a nutshell

The minimum viable product is that version of a new product which allows a team to collect the maximum amount of validated learning about customers with the least effort.

MVP, despite the name, is not about creating minimal products. If your goal is simply to scratch a clear itch or build something for a quick flip, you really don’t need the MVP. In fact, MVP is quite annoying, because it imposes extra overhead. We have to manage to learn something from our first product iteration. In a lot of cases, this requires a lot of energy invested in talking to customers or metrics and analytics.

Ash Maurya also described it as:

The smallest thing you can build that delivers customer value (and as a bonus captures some of that value back).

At the same time, other entrepreneurs like Rand Fishkin also highlighted the drawbacks of the MVP approach when you have an established brand.

Indeed when you have an established brand, it might make more sense according to Fishkin to adopt the EVP or Exceptional Viable Product approach, summarized as:

My proposal is that we embrace the reality that MVPs are ideal for some circumstances but harmful in others, and that organizations of all sizes should consider their market, their competition, and their reach before deciding what is “viable” to launch. I believe it’s often the right choice to bias to the EVP, the “exceptional viable product,” for your initial, public release.

In my view, an MVP done right should already have the features described by Fishkin EVP. However, Rand Fishkin raises an important point. A company with an established brand should be cautious the way it releases its MVP.

One classic example of what a disastrous MVP can do is Microsoft‘s launch of Bing, which promised to take over the search engine industry, and replace Google as the monopolist of search and the meme of our generation (Microsoft wanted to establish the meme “bing it”) but failed miserably:

While Bing today represents a decent presence for Microsoft in the search industry (Bing makes a few billion dollars to Microsoft) it never really recovered from that MVP launch.

As of 2019, if you ask to the SEO industry (the practitioners that position their content via search) many still curl their lips at the sound of “Bing.”

Indeed, while SEOs are both a blessing and a curse for Google, that community has helped Google get better over the years.

For instance, thanks to the so-called Black SEO practices (attempts to manipulate – successfully – the Google’s algorithms) the search engine has evolved more quickly, by releasing algorithm updates that allowed it to get better and better over the years.

Before building up an MVP, entrepreneurs have learned the hard way, that there is another step, the problem/solution fit.

MVP makes you fall into the trap of building up a product even before understanding the problem the target market faces. That might delay the ability of a company to build a product that satisfies the market.

Ash Maurya describes this phenomenon in “Don’t Start With an MVP:”

You raise your odds of success significantly by spending the requisite time first defining the MVP, then validating it using an offer, before building it. Think of it as Demo-Sell-Build versus the more traditional Build-Demo-Sell approach.

Therefore, where the entrepreneurial world has stressed so much over the solution by trying to build an MVP, that has delayed the ability to deliver a product that the market wants.

Instead, by focusing on the problem first, you can understand the problem, and as Ash Maurya said it, you’ll make the market “an offer your customers cannot refuse.”

The demo > sell > build process has become common nowadays with many platforms (Kickstarter is one of them) that make it possible to validate an idea, selling it, even before the product is ready.

In a blog post entitled The Revenge of the Fat Guy Ben Horowitz points out the four myths about product-market fit.

Some companies achieve primary product market fit in one big bang. Most don’t, instead getting there through partial fits, a few false alarms, and a big dollop of perseverance.

Myth #2: It’s patently obvious when you have product market fit

Ben Horowitz among others uses this example:

Apple’s first iPod shipped in November 2001. It took nearly two years (91 weeks, to be precise) to sell its first million units. In contrast, Apple’s iPhone 3GS shipped June 2009 and shipped 1M units in 3 days. At what point is it obvious to the original iPod team that they’ve achieved product-market fit?

In short, determining when you have reached a product-market fit might seem obvious at hindsight but not so when that is happening!

Myth #3: Once you achieve product-market fit, you can’t lose it

Myth #4: Once you have product-market fit, you don’t have to sweat the competition

A market that has a big opportunity also has massive competition. If so, the fight will be fierce and if the fight is fierce, how do you know when the time is right to battle up? Also here there is no formula, but the ability to quickly adapt becomes a key advantage.

There are several tools to find your product-market fit. Some of them are:

An example of the Value Proposition Canvas by Alexander Osterwalder

An example of the Lean Startup Canvas by Ash Maurya

The product-market fit can be defined as the ability of a product to satisfy the market. The market itself can be segmented to start from a niche market; throughout this process, it is critical to use a method called market segmentation.

At the same time before going to build a product through the lean startup methodology, it is essential to define the problem itself. That can be done via the problem-market fit model which goes through a process of demo-sell-build.

Thus, you will maximize the chances of success of your MVP.  Once the MVP is ready, you want to keep improving it to grab more and more market share or to broaden the market wanting the product. At that point, you’ll have reached product-market fit.

The whole point of the process highlighted in this guide is about coming up with ideas that you can validate and sell even before building a product.

Today that is possible via crowdfunding platforms, or by setting up offerings and only after enough people join in, you start building a product.

Thus, in this era, where digital allows entrepreneurs to quickly and at low costs gather feedback of a large group of people. It is possible to sell something even before you’ve built it!

The concept of cognitive biases was introduced and popularized by the work of Amos Tversky and Daniel Kahneman since 1972....