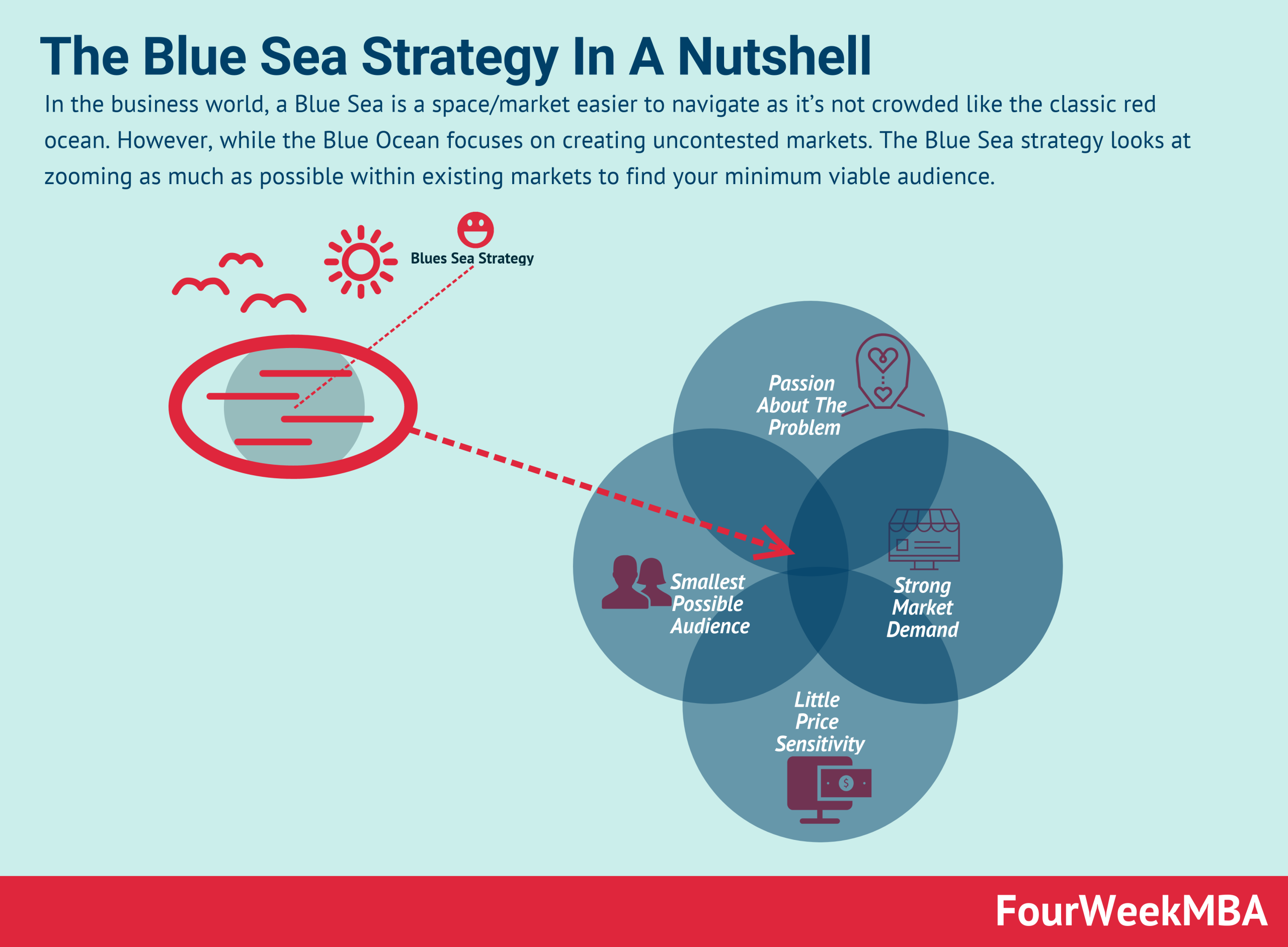 In the business world, a Blue Sea is a space/market easier to navigate as it’s not crowded like the classic red ocean. However, while the Blue Ocean focuses on creating uncontested markets. The Blue Sea strategy looks at zooming as much as possible within existing markets to find your minimum viable audience.

The core premise of a Blue Ocean Strategy is to break down the trade off between value and cost, by creating uncontested markets.

This is all very interesting, and we all would like to create those incredible uncontested markets where we can redefine the whole business playbook.

However, in a few cases, companies manage to transition toward uncontested markets. And even when that happens, followers come quickly, to steal as much market share as possible.

Thus a blue ocean is often times, more the result of a bloody war, rather than a space exploration. A Blue Sea strategy instead tries to redefine value, not for a whole market, but only for a small group of people, craving for that value to be provided.

Let’s see what really makes up a Blue Sea.

Zooming in to find your MVA

Where Blue Oceans create an uncontested markets by looking beyond the boundaries of existing ones (it zooms way out to understand how a whole market might look different a decade from now).

The Blue Sea Strategy instead looks at existing markets and it zooms in as much as possible to find a minimum viable audience.

In a Blue Ocean Strategy competition is made irrelevant by changing the business playground. As a whole new market is created the Blue Ocean player will be able to capture most of that market opportunity.

In a Blue Sea Strategy competition is made irrelevant by redefining value for the minimum viable audience, that is not satisfied in full by existing products available on the market.

You go where existing players, can’t, won’t or are not able to go.

In a Blue Sea there is space for all

In a Blue Ocean Strategy new demand is captured by being the first-mover or among the first movers in a new market.

In a Blue Sea Strategy you can be very late and still build a valuable business. That’s because the Blue Sea player will redefine value by going where the existing, established players can’t, perhaps because it would be too expensive for them, or not scalable at all.

An audience so small that is not threatening for existing players, and yet interesting to get the business off the ground.

In a Blue Sea, price sensitivity is flipped upside-down

Where the Blue Ocean Strategy breaks the cost-value trade-off (offer more at a lower cost). In a Blue Sea Scenario, your smallest viable audience will be so keen to support your business, to be happy to pay you a premium price for your product, as soon as you keep it tailored to them.

Look at the present and change it fora few

A Blue Ocean Strategy looks at the future, it envisions it and it builds it. A Blue Sea Strategy instead, looks at the past and it redefines it for the smallest audience that didn’t like how that future turned out to be.

Is the Blue Sea strategy only for niche players?

Not really. A Blue Sea strategy does start from a minimum viable audience, but it creates options to scale. Those options can be exercised by time to time.

However, when a company scales up it might bring to the end of value for its minimum viable audience.

Therefore, as in a classic Crossing The Chasm scenario, the Blue Sea player will need to think through this option.