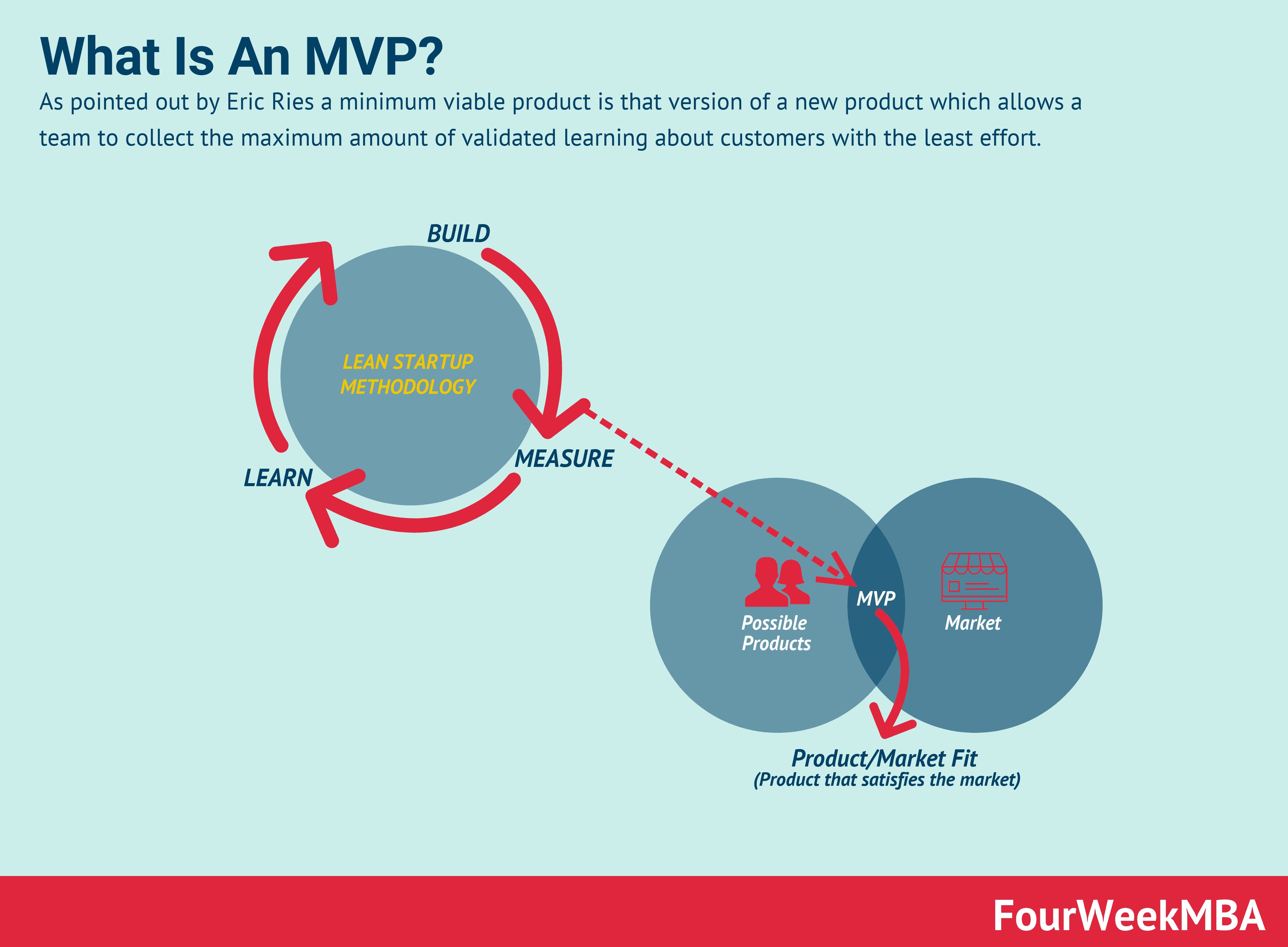 As pointed out by Eric Ries a minimum viable product is that version of a new product which allows a team to collect the maximum amount of validated learning about customers with the least effort.

We’ll see throughout this article what is an MVP, why it matters and when you can use an alternative approach called Exceptional Viable Product (EVP).

The origin story of the lean startup movement

It all started with an HBR article of 2013 that referred to a new phenomenon in the business world “Why the Lean Start-Up Changes Everything:”

For a few years already, serial entrepreneur – Steve Blank – had noticed a new pattern in the business world, which he called the Customer Development Manifesto, which moved along 17 principles.

This manifesto started from a definition of a startup that moves along those lines:

The interesting part of this definition is – I argue – the “search for” part. In fact, many companies in the past started from a prepackaged business model they could apply to their business to scale up.

In fact, only when a startup has found the proper business model it will be able to unlock value in the long-run.

From then on the Manifesto became the starting point for The Lean Startup Movement:

That also brought to the Lean Startup Methodology.

The lean startup methodology in a nutshell

In a nutshell, the lean startup methodology aims at creating a scientific, repeatable process for product development that allows the startup to build products and deliver them fast. In other words, the lean startup moves around three stages:

This process of build > measure > learn will need to be repeated over and over, thus creating a feedback loop. The main purpose is to initially come up with a minimum viable product (MVP). In fact, that is a critical aspect of the lean startup model.

As pointed out by Eric Ries:

A Minimum Viable Product is that version of a new product which allows a team to collect the maximum amount of validated learning about customers with the least effort.

What is not an MVP?

This kind of simplification brings to flaws and mistakes that can also lead to great failures. In fact, more specifically Ash Maurya defines the MVP as “the smallest thing you can build that delivers customer value (and as a bonus captures some of that value back).”

That is where the Exceptional Viable Product definition given by Rand Fishkin comes in handy and in a way it connects with the stricter definition of MVP given by Ash Maurya.

When does an MVP make sense?

If you just starting up, you don’t have an established brand and your reach is limited, the MVP might be the way to go. That’s because the risk of failure and the cost in terms of branding is very very limited.

Thus the value captured from the iterations is high. All that changes if you have an established brand and a broad reach.

What Is the Exceptional Viable Product?

As Rand Fishkin pointed out:

I believe it’s often the right choice to bias to the EVP, the “exceptional viable product,” for your initial, public release.

Fishkin suggests creating an MVP but not releasing it until that is exceptional. At that point, you do release it to the public. Thus, the exceptional viable product (EVP) methodology requires an iteration of the product “in-house,” tested with your team and maybe a few selected customers.

Only when you’re sure the product is exceptional you can launch to a broader audience. The EVP methodology allows more established brands to avoid failures that can lead to irrecoverable loss of reputation.

Why and when to use the Exceptional Viable Product methodology?

As Rand Fishkin pointed out:

My proposal is that we embrace the reality that MVPs are ideal for some circumstances but harmful in others, and that organizations of all sizes should consider their market, their competition, and their reach before deciding what is “viable” to launch. I believe it’s often the right choice to bias to the EVP, the “exceptional viable product,” for your initial, public release.

Depending on your brand’s size and reach, and on the customers and potential customers you’ll influence with a launch, I’d urge you to consider whether a private launch of that MVP, with lots of testing, learning, and iteration to a smaller audience that knows they’re beta testing, could be the best path.

In other words, he takes into account two main variables. On the one hand, you have the attention, customers, and evangelism.

On the other hand, you have the product quality. The greater the attention, customers base and ability to evangelize the more you’ll need to have a solid product before its launch.

In Rand Fishkin vision, an EVP has to have two minimum features:

He learned that lesson at Moz when he was trying to build a new tool to identify spammy links. As Rand Fishkin recounted:

Our research had already revealed what customers wanted. They wanted a web index that included all the sites Google crawled and indexed, so it would be comprehensive enough to spot all the potential risky links. They wanted a score that would definitively say whether a site had been penalized by Google. And they wanted an easy way of knowing which of those spammy sites linked to them (or any other site on the web) so they could easily take that list and either avoid links from it or export and upload it to Google Search Console through a disavow file to prevent Google from penalizing them.

But we didn’t have the focus or the bandwidth to build the exceptional product, so we launched an MVP, hoping to learn and iterate. We figured that something to help our customers and community was better than nothing.

I think that’s my biggest lesson from the many times I’ve launched MVPs over my career. Sometimes, something is better than nothing. Surprisingly often, it’s not.

Thus, a scientific method of building up a product which allows a startup to create a feedback loop to get valuable data and have a finished product.

The definition of MVP has been often misunderstood and it has led to many failures. That is why Ash Maurya likes the strict definition of MVP that consists in building “the smallest thing you can build that delivers customer value (and as a bonus captures some of that value back).”

Moz.com founder, Rand Fishkin also helps us with a new way of defining a viable product, based on the EVP.

In short, he points out that while for small startups, that have low exposure building up an MVP might be less risky. For an established brand using the MVP approach, might be too risky.

In fact, this often leads to the “something is better than nothing syndrome.” Rand Fishkin learned the lesson in a hard way. You can avoid that failure by adopting the EVP approach to product development.

T-shaped people have now become an essential part of the business world. As the story goes, a T-shaped profile is...