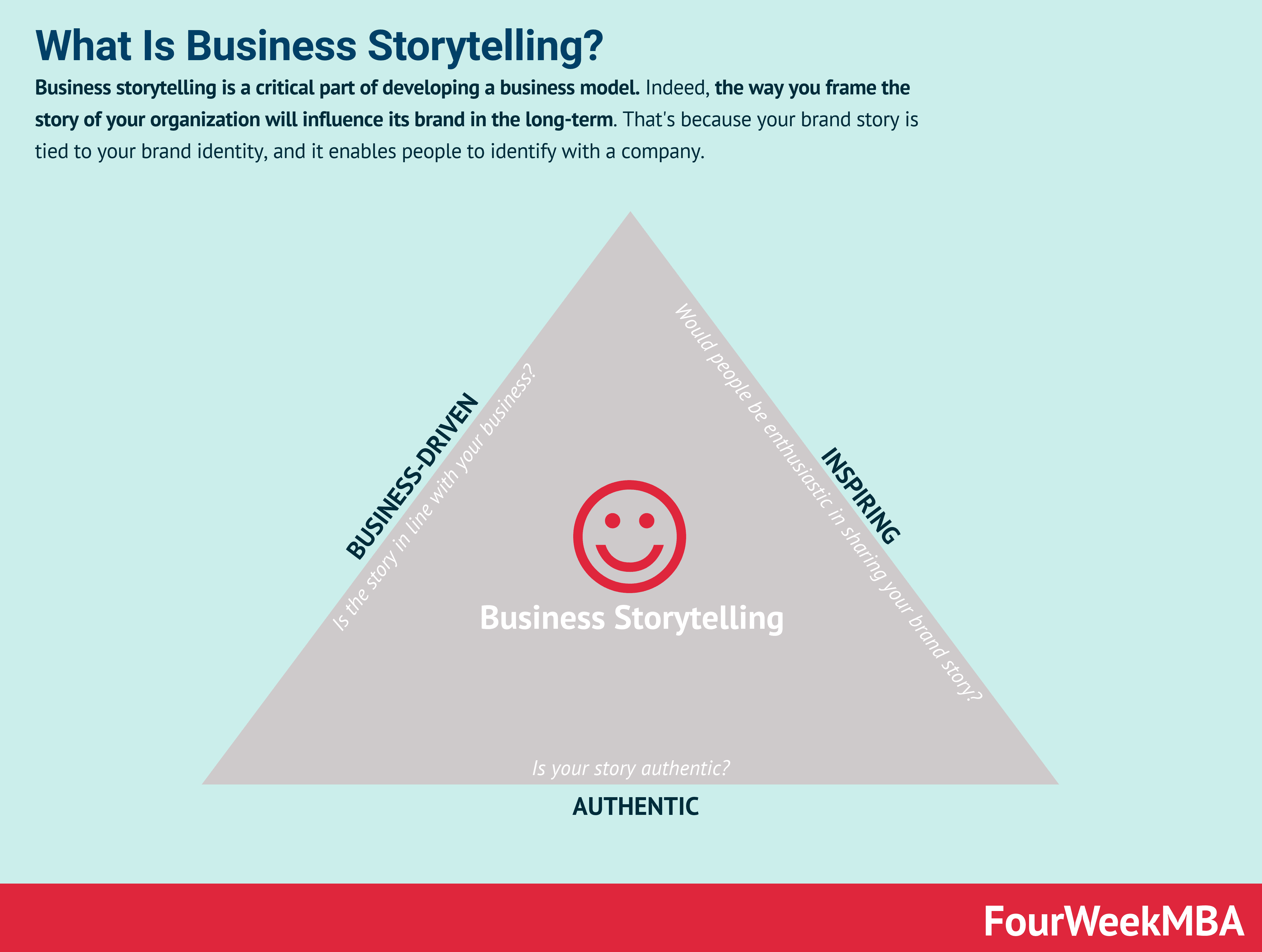 Business storytelling is a critical part of developing a business model. Indeed, the way you frame the story of your organization will influence its brand in the long-term. That’s because your brand story is tied to your brand identity, and it enables people to identify with a company.

Back in the cave

Would you agree with these statements? I bet you would. Yet this is not the thesis of History’s Professor, Yuval Noah Harari, also the author of “Homo Sapiens,” and “Homo Deus.” In fact, as he explains in his Ted Talk, individually, humans are not that smarter or stronger or better than other animals, or mammals in particular. Humanity took over the world.

How is it possible then that humans dominated the world? The answer, according to Harari is ‘cooperation.’ Other animals cooperate as well! What makes us special? Are we more peaceful, compassionate or smarter than other mammals? Not really.

For instance, among our closest cousins, the bonobos, are way more peaceful and almost as much intelligence as we are. Then, again, what is unique about us?

The Rise of the Story-Listeners

According to Harari, we are the only species on earth, which beliefs in stories, myths, and narratives. In short, if you ask a monkey to loan you a banana in exchange for a banana and a half in a year’s time; the monkey will not only eat it but also throw you a stone. Why? Because the monkey does not believe in the “interests’ myth.”

This ability to believe in stories, allowed us to form large and complex societies. In fact, our brains allow us to cooperate at the small-scale level.

This is because there is only a certain threshold of information that our minds can handle before plateauing. According to Harari, if we could not believe in stories, it would’ve been impossible to form groups of more than 150 individuals.

Therefore, this ability carried us forward. Yet, if we ask ourselves “are we happier, healthier, and more intelligent than we were when living in the Savannah?” Although there is no definitive proof, according to Harari, the answer may be a “big no-no.“

Why? Often we are so compelled to believe in stories. Those narratives, bend our reality and make the world take a strange turn. In other words, when those stories became mere propaganda this can lead to significant troubles.

Therefore, each time we come up with a new “myth” we should also place a label on it, which says “handle with care,” to avoid troubles.

What does this have to do with the business world?

How Storytelling Moved from the Historical Stage to the Business Arena

So far we can say that among the most significant inventions of humankind there is not the wheel, the steam machine, or the space shuttle. Instead, the corporation, the state, and the church.

From Emperor Augustus to Steve Jobs; from Alexander the Great to Elon Musk; storytelling and the ability to “fabricate” new myths had played a massive role. For instance, Emperor Augustus understood that to keep the Roman Empire compact; he had to create the “Roman myth.”

How could he otherwise glue together the consciences of millions of individuals? He did so through a story, which became known as “The Aeneid,” written by the most excellent storyteller of that time, Virgil!

You may say, “well, these are persons, not myths.” Yet this is only in part true. Take Steve Jobs. Although he doesn’t have a physical existence anymore, he is still alive in the conscience of millions if not billions of individuals. We can say that in the “inter-subjective reality” (the stories shared by millions of heads) he is alive than ever.

Don’t get me wrong, both Apple and Tesla are great companies. A great contributor to their success was the ability of those companies to carry out the so-called “founder’s myth.“

There is nothing wrong with that. On the other hand, when the fabricated stories start to bend reality, by creating a massive gap between the “real world” and the “mythological world” things may get out of hand.

What would happen to Apple or Tesla if people suddenly stopped to believe in the founders’ myth?

An Ethical Code for Storytelling: The Art of Finding the Sweet Spot

We saw how important storytelling is to create a business that sticks in people’s minds. On the other hand, we also want to make sure to find the sweet spot. How? By answering three central questions:

Is your story authentic?

Howard Schultz (Starbucks‘ Founder) tells the story of his father, which broke an ankle when he was only seven years old, and the whole family lived in New York City housing projects. Since his father had no health insurance, to pay for the expenses they were left with no income.

At the moment in which Howard Schultz told this story, he fabricated the corporate responsibility myth. In fact, companies are abstract entities. How can a company be responsible?

Would people be enthusiastic about sharing your story?

When Blake Mycoskie explains how he founded TOMS SHOES people want to be part of it. Therefore, when you buy Tom’s shoes, you are not only purchasing cool shoes but rather the story behind it.

As Mycoskie recalls in his book “Start Something that Matters” people are so excited to share Tom’s story, that there is no need for marketing the product; it sells itself. Once again, Mycoskie is a story that compels people to share and spread the word. And once again the story is authentic.

Is the story in line with your business?

When Elon Musk‘s story of how he founded his companies  spreads like a virus, his companies automatically acquire an aura of heroic entities, operating for the “greater good.“

Therefore, even though Musk‘s companies get $4.9 billion in government support, none raises an eyebrow. Why? Because once again the story is authentic, compelling, and in line with Musk‘s business ventures.