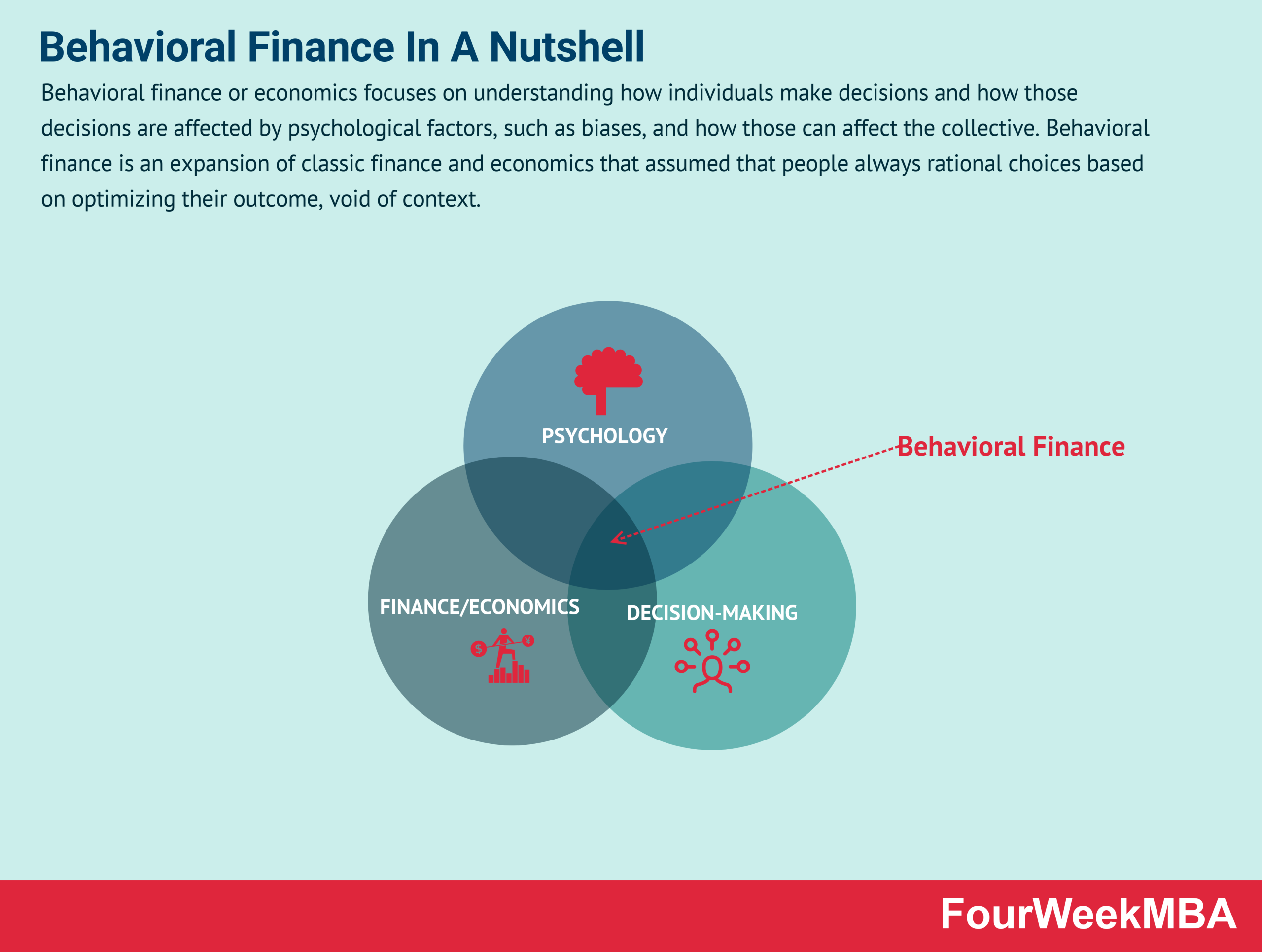 Behavioral finance or economics focuses on understanding how individuals make decisions and how those decisions are affected by psychological factors, such as biases, and how those can affect the collective. Behavioral finance is an expansion of classic finance and economics that assumed that people always rational choices based on optimizing their outcome, void of context.

In the first half of the twenty century, a group of economists believed that markets overall worked efficiently. In other words, we could assume by looking at the price of the assets exchanged through the stock exchanges that those prices were fairly valued.

This leads to the development of investment strategies, mainly based on the Modern Portfolio Theory (MPT), of which Harry Markowitz, of the University of Chicago, was the prophet. In short, the MPT developed a financial toolbox that presumingly would give the investor the maximum return, based on the assumed risk the investor undertook.

This led to the overconfident use of standard deviation and Beta, to assess the expected return of a certain stock. Although this method is flawed, it is still used by many financial institutions and professionals.

Economists slowly understood that in order to create a valid framework for investing a new approach was needed. Indeed, the understanding of the “psychology of the masses” was already known at the beginning of the twenty century (see Selden’s 1912 book “Psychology Of The Stock Market“).

On the other hand, this understanding was not packaged into the financial decision framework, because the “Chicago crew” was still too powerful. But the severe crises that happened in the last decades convinced economists and practitioners that the “new science” (behavioral finance) could not be ignored.

The rise of the efficient market theory survived throughout the twenty-century. On the other hand, recent studies have confirmed the importance of understanding the “psychological and sociological framework” before picking up stocks.

Therefore, the modern investor has to have a foundation in psychology and sociology as well. Why? For two main reasons:

Finance is one of those fields, in which experience and knowledge may create more harm than good. And the paradox is that hundreds of millions of individuals rely on the ability of fund managers to safeguard their savings.

What are the main behaviors we have to safeguard ourselves from?

As the say goes, “who dares wins.” No doubt that this “say” may work in some fields, such as entrepreneurship. On the other hand, when it comes to financing and investing it is important to take two variables into accounts: the opportunity cost and the transactional costs.

In other words, before buying and selling any stock, it is important to understand that when our money is tied to a financial instrument, we cannot invest it in an alternative one. In economics, this is called opportunity cost.

In addition, modern technologies allow us to buy and sell with a high frequency. This creates the illusion of low if not irrelevant transactional costs. But this is only an illusion. Why? For instance, in a study about how men and women invested, men resulted in more overconfident. Therefore, they traded with more frequency. The sudden increase in transactional costs, due to the impulse of men to act, slowly eroded the returns of those investors.

Surprisingly enough, transactional costs reduced men’s investment return by about 2.5%, compared to 1.72% for women. This may seem a small percentage but it is actually a 45% increase in transactional costs, which compounded for a few years, makes a huge difference. One way to avoid this is to set-up a long-term plan and make sure to stick with it.

Switch off Your Narrative Machine

Mr. Average has bought Popular Inc. stocks, based on the article he recently read in the Wall Street Journal. The article argued how the company that now produced the coolest socks in the world, was an amazing investment, due to their new acquisition. It all made sense in Mr. Average’s mind.

On the other hand, after a few days, the stock declined considerably. Did Mr. Average sell? Of course, he didn’t. In fact, he felt relieved when the news confirmed this only was a temporary adjustment. Unfortunately, it was not.

Yet even after losing more than half of the invested capital, Mr. Average still believed his investment was sound, and eventually, he would have profited. Why? He forgot to switch off his narrative machine.

In fact, modern psychologists argue that our conscious brain often intervenes after the fact. In short, if we are swept by our emotions, the unconscious mind decides for us. The conscious mind only intrudes to generate an ex-post narrative, which gives us the illusion that everything is under control. But this is only an illusion! Behavioral finance calls this phenomenon, “cognitive financial dissonance.”

Probability Neglect – Careful to the Sure Gain

Probably due to our biological heritage, we love sure things. Mr. Hominidus, while hunting in the Savannah, when given the chance to have a sure prey he could not resist the temptation. Why resist?

It was crucial for him to survive. Unfortunately, what worked in Savannah, does not work nowadays. In a complex world, in which rhythm is imposed by the probabilistic laws, Mr. Hominidus (which is us) makes a lot of bad decisions. In behavioral finance, this is called Prospect Theory.

Its assumptions are diametrically opposed to that of efficient market theory. In fact, prospect theory holds that “under the condition of uncertainty individuals act irrationally.” In other words, they neglect probabilistic laws altogether, which makes them very bad decision-makers.

How to Get out from the Savannah

As we saw many of our human features, evolved when we still lived in the Savannah. Now cultures and societies evolve at such a fast pace, that we are not able to keep up with them. How can we become better investors? Victor Ricciardi and Helen K. Simon give us some advice:

“The best way for investors to control their “mental mistakes” is to focus On a specific investment strategy over the long-term. Investors should keep detailed records outlining such matters as why a specific stock was purchased for their portfolio. Also, investors should decide upon specific criteria for making an investment decision to buy, sell or hold.”

The limits of Behavioral Finance And Economics

While Behavioral Finance might represent an improvement of classical finance and economics, in reality, it showed already its many drawbacks. Indeed, the foundation of behavioral finance is built on the premise that:

Those are just some of the flawed premises of behavioral finance.

Indeed, as explained in bounded rationality, heuristics, and biases, which in many cases psychologists call biases, are context-based decision-making tricks. In addition, individual behaviors when scaled become something else, which cannot be explained from the individual but it becomes a creature of its own (to say the psychology of the individual is something completely different from that of the masses and confusing the two is extremely dangerous).

Lastly, behavioral finance has given the rise of the school of thought, that of the “nudgers” that believe that by understanding individual biases they can tweak the whole collective.

This whole discipline, therefore, just as classic economics is flawed, and as an entrepreneur and business person you want to be skeptical of that.