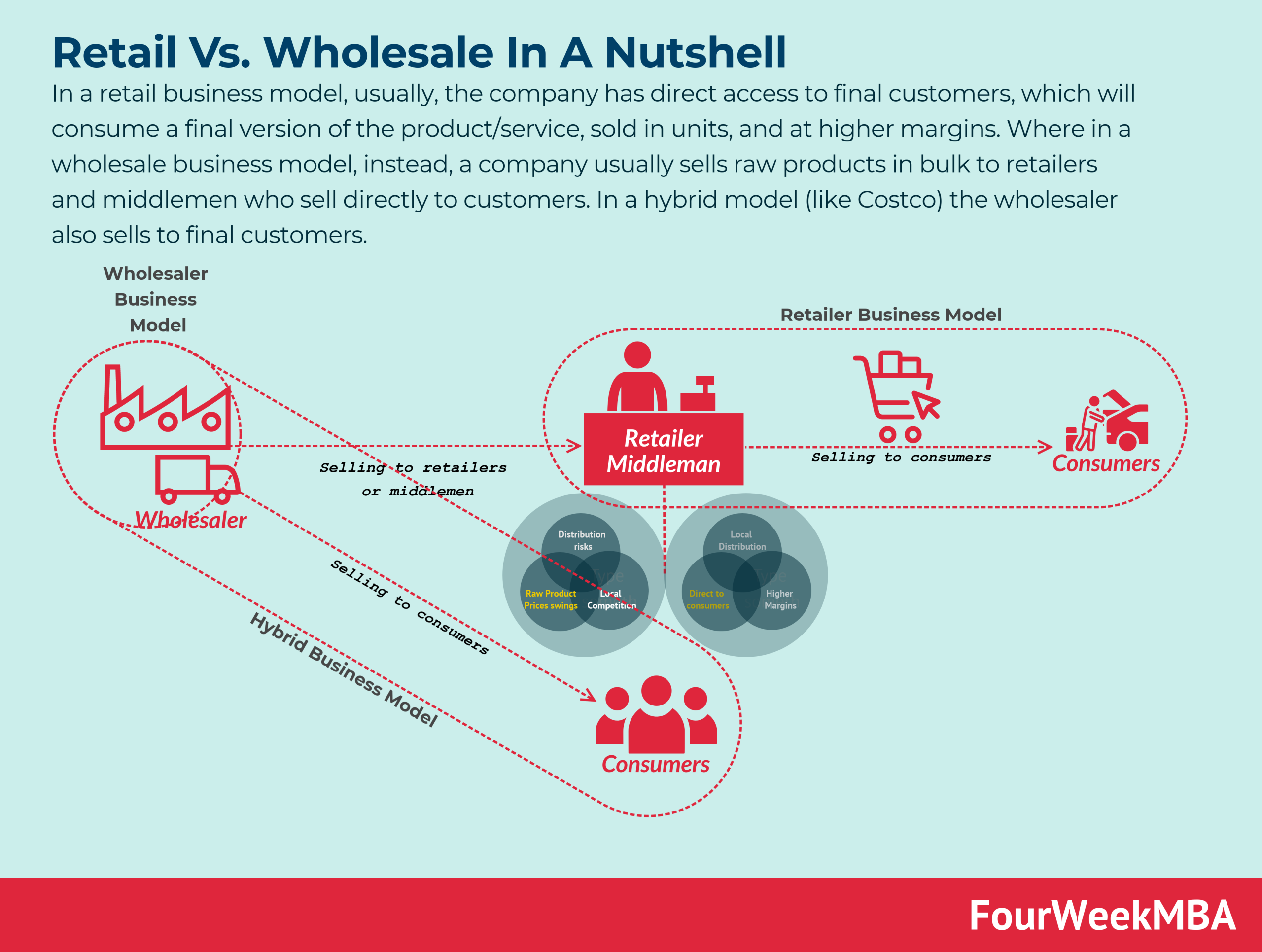 In a retail business model, usually, the company has direct access to final customers, which will consume a final version of the product/service, sold in units, and at higher margins. Where in a wholesale business model, instead, a company usually sells raw products in bulk to retailers and middlemen who sell directly to customers. In a hybrid model (like Costco) the wholesaler also sells to final customers.

The retail business model is straightforward. The company buys raw products in bulk, it either process, repackages, or sells them directly to final customers at a much higher margin than the bulk purchase. In addition, since the retailer goes direct to consumer, it doesn’t have to split the revenues with middlemen.

This gives the retailer high gross margins on its sales. In this way, the retailer can finance its operations, which are usually much more expensive.

In fact, the retailer has distribution risks associated with the fact that in order for the business to survive it must have a continuous flow of consumers. Since the retailer business usually sells lower-priced products and services to more people, rather than taking much larger orders, like the wholesaler.

In the wholesale business model, generally, the company sells in bulk, to fewer customers (usually retailers or middlemen) who deal with final customers. Therefore, the wholesaler has less marketing and distribution costs associated with having to attract a continuous stream of customers, and instead, most of the effort is skewed toward inventory, transportation, and distribution (intended as the deals with retailers).

Main differences between Retail and Wholesale

Let’s see the main differences between retailers and wholesalers:

Local and direct access to customers vs wider distribution capacity

The retailer distribution is mostly local (unless of course, you set up an online retail shop). The wholesaler instead can cover larger territories by dealing with other retailers, locally, nationally, and internationally. Therefore, in general, the retailer is localized and operates within central locations in cities and towns, while the wholesaler is delocalized and usually operates outside central areas.

That’s because to the wholesaler what matters is the ability to stack more raw product per square foot. Where to the retailer matters more than the local market it can access, and the premium prices it can charge.

Thus, the wholesaler might opt for locations where there is more space and less expensive in terms of rental per square foot. The retailer might do the opposite choice. It might pick smaller locations, which gives it an advantage in terms of access to more consumers and the ability to charge a premium based on the location.

The retailer usually enjoys higher margins, given the fact it can sell directly to customers. Therefore, transform a simple product (perhaps a bag of coffee) into a product served to customers and therefore with a very high gross markup. However, the retailer might also have much higher operational costs per unit given it has to focus more on location, and customer service to successfully operate the business (think of a restaurant in a city center with the incredible rent expenses it will run).

On the opposite side, the wholesaler might focus less on location and more on its ability to be closer to retailers/middlemen or the customers to whom it can sell the product in bulk. And on its ability to stack the inventory efficiently and organize transportation around it. Therefore, the wholesaler might enjoy lower gross margins (the product is sold in bulk and at a lower price per unit) but relatively lower operational costs and distribution risks (which are carried by the retailer).

The retailer does take on its shoulders the distribution risks, associated with the costs of running the overall business and making sure that a continuous stream of customers and repeat customers feed the business.

While the wholesaler also needs to worry about customers, it will also have much lower marketing costs associated with its business, and most costs skewed toward logistics. In short, the distribution risks for the wholesaler translate into its ability to efficiently structure its operations and logistics, rather than how to find customers, which is instead the main worry for the retailer.

In most cases, the retailer will need to understand as much as possible the local market, as this will be the lifeblood of the business. The wholesaler instead will need to worry about access to infrastructure, and to larger urban areas where many other retailers are available. From there, make sure to be competitive at the national and international level to quickly distribute the raw product.

Since the retailer usually does not control the supply chain it might also be exposed to price fluctuations which it can’t control. On the other hand, the wholesaler might have more control over the supply chain, and ascertain more purchasing power, given its larger size compared to retailers.

Thus, it might be more subject to logistic impact overall.

Costco and the Hybrid model (a Wholesaler selling directly to consumers)

Costco attracts consumers with things like good gas prices, and simple products, like the food court deal, with the iconic Costco hot dog and soda combo for just $1.50, to attract consumers to its wholesale stores and sell them things in bulk. Those are used as hooks and a marketing strategy.

This strategy is well known as the “loss leader strategy” where a product is not profitable, as long as ancillary, complementary products are sold at profit.

This might sound trivial, and yet by creating a moment for the family to share a food experience (something that you usually see in a retail shop), Costco creates the opportunity for a shopping experience for the whole family. This strategy has worked well since 1985.

Retail and the fashion industry

The fashion industry is also a very interesting example of how retail business models adapted over time and it offers a window into the future.

In fact, on the one side, we have slow fashion players who focus on selecting manufacturers and sell their products in flagship stores, usually located in very central locations within large urban areas, by focusing on their sustainable branding.

And on the other spectrum, you have fast-fashion players, who focus less on manufacturers’ selection and more on logistic optimization to speed up production and lower down the costs of the items sold. While still using retail spaces in central locations in large urban areas to distribute the product.

Over the years, new players like ASOS, have learned to further speed up the manufacturing process, and to reduce the retail space, to decrease prices, and yet have wider margins, as instead of selling in retail they distribute the product directly from sholesales to customers, in what is called ultra-fast fashion.

And the most recent evolution of that, with players like SHEIN, which have brought the fast-fashion concept to the next level, by tapping on digital tends quickly developing on social media like TikTok, further reducing manufacturing time, and by tapping into a global distribution by using online retail.-

Thus, on the one hand, SHEIN fast-follows, surfs, and creates digital trends. And on the other hand, it reduces physical retail spaces, in favor of online retail spaces, further decreasing prices and still keeping margins and profitability. This is known as real-time retail.

Whether these retail models will be sustainable in the long run it’s hard to say.