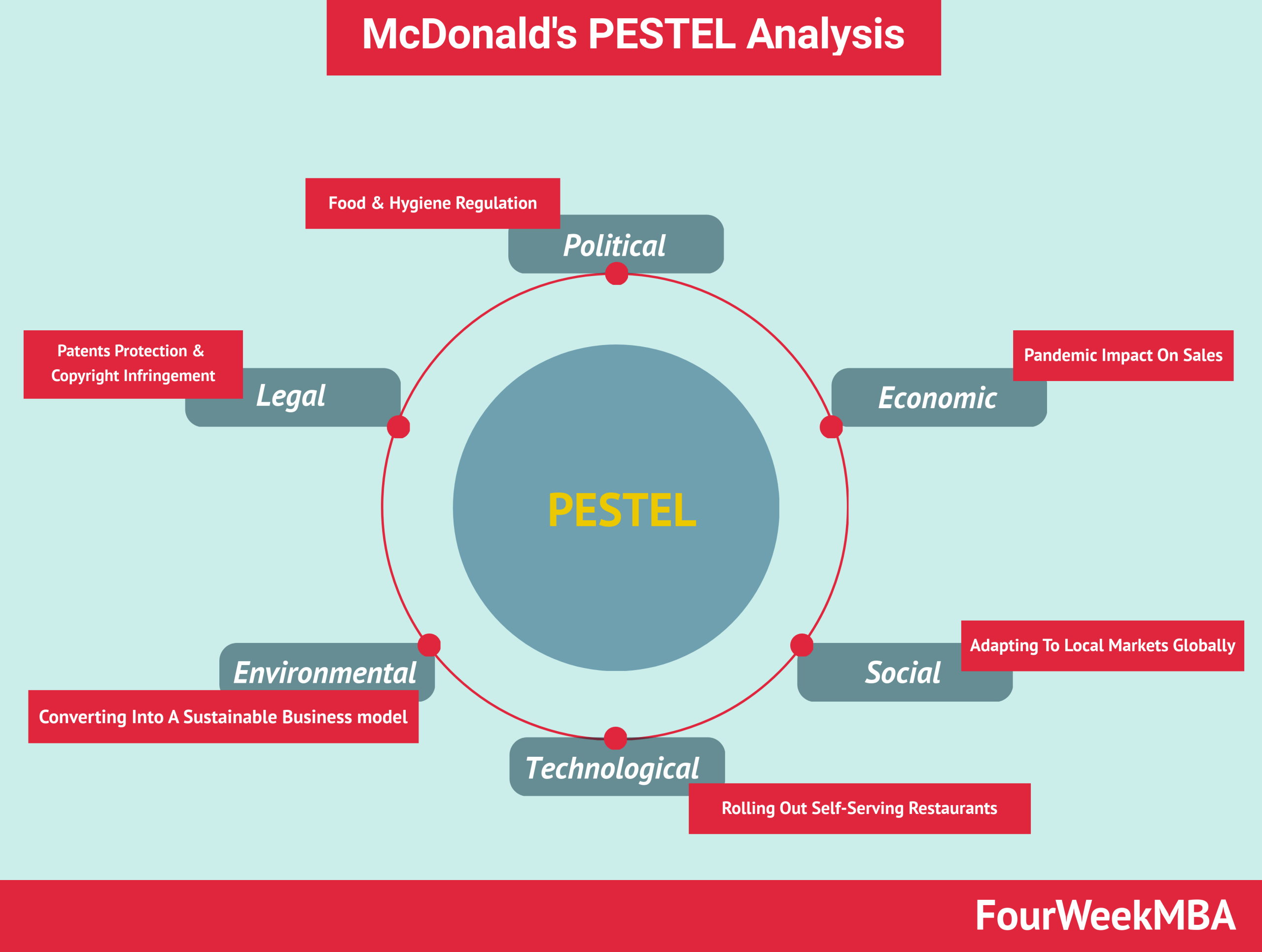 The McDonald’s brand is instantly recognizable as a fast-food restaurant chain offering an affordable, fun, and family-oriented eating experience.

The company was the first such restaurant to incorporate drive-through ordering, and its consistency has seen it become a success in hundreds of countries.

However, the pillars McDonald’s was built on are no longer guaranteed to take the company forward. How will it expand and grow in face of changing consumer preferences?

We will attempt to answer this question and much more in the following PESTLE analysis.

McDonald’s has approximately 34,000 restaurants in 118 countries, so political tension is almost guaranteed. The company is sensitive to hygiene regulations and increasingly, regulations around foods causing heart disease and obesity.

Countries with anti-American sentiment are also problematic for McDonald’s. For this reason, the company was banned from operating in Iran and North Korea to name a couple. McDonald’s was also banned from Bermuda because of long-held laws against foreign restaurant chains.

Global sales fell by 22% as a result of the coronavirus pandemic, with three-quarters of all McDonald’s stores operating in a limited capacity.

McDonald’s is also vulnerable to microeconomic factors. The company ceased operations in Iceland because of the prohibitive cost of acquiring meat, cheese, and vegetables.

McDonald’s is supremely skilled at adapting its menu to suit local tastes. For example, it offers a McSpicy Paneer in India, a Panzerotti in Italy, and a Corn Pie in Thailand.

The company has also taken steps to make its menu more attractive to health-conscious consumers. However, this healthier menu is being seen as a less desirable option than similar menus in other restaurants. If it cannot strike the right balance, McDonald’s is also at risk of alienating the customers who prefer its traditional offerings.

To double down on its ethos of fast service, McDonald’s is in the process of rolling out self-serve kiosks in its restaurants. It has also invested in automated voice-technology to take drive-through orders.

The chain has been involved in many lawsuits over its seven-decade history. Most of these related to trademark infringements with many copycat restaurants using the “Mc” prefix in their name and branding.

Although indirectly, McDonald’s contributes to greenhouse gas emissions and deforestation through its high demand for beef products. In some countries, it is also being pressured to phase out plastic straws and other harmful packaging.

In 2012, McDonald’s opened its first green restaurant in Australia. It features energy-efficient lighting, solar panels, rainwater harvesting, and was built from recycled steel and concrete. To reduce electricity demands, many restaurants are also using waste heat from the kitchen to heat water.

Background Nike is the world's largest athletic shoe manufacturer. It's also one of the most successful, generating over $30 billion...