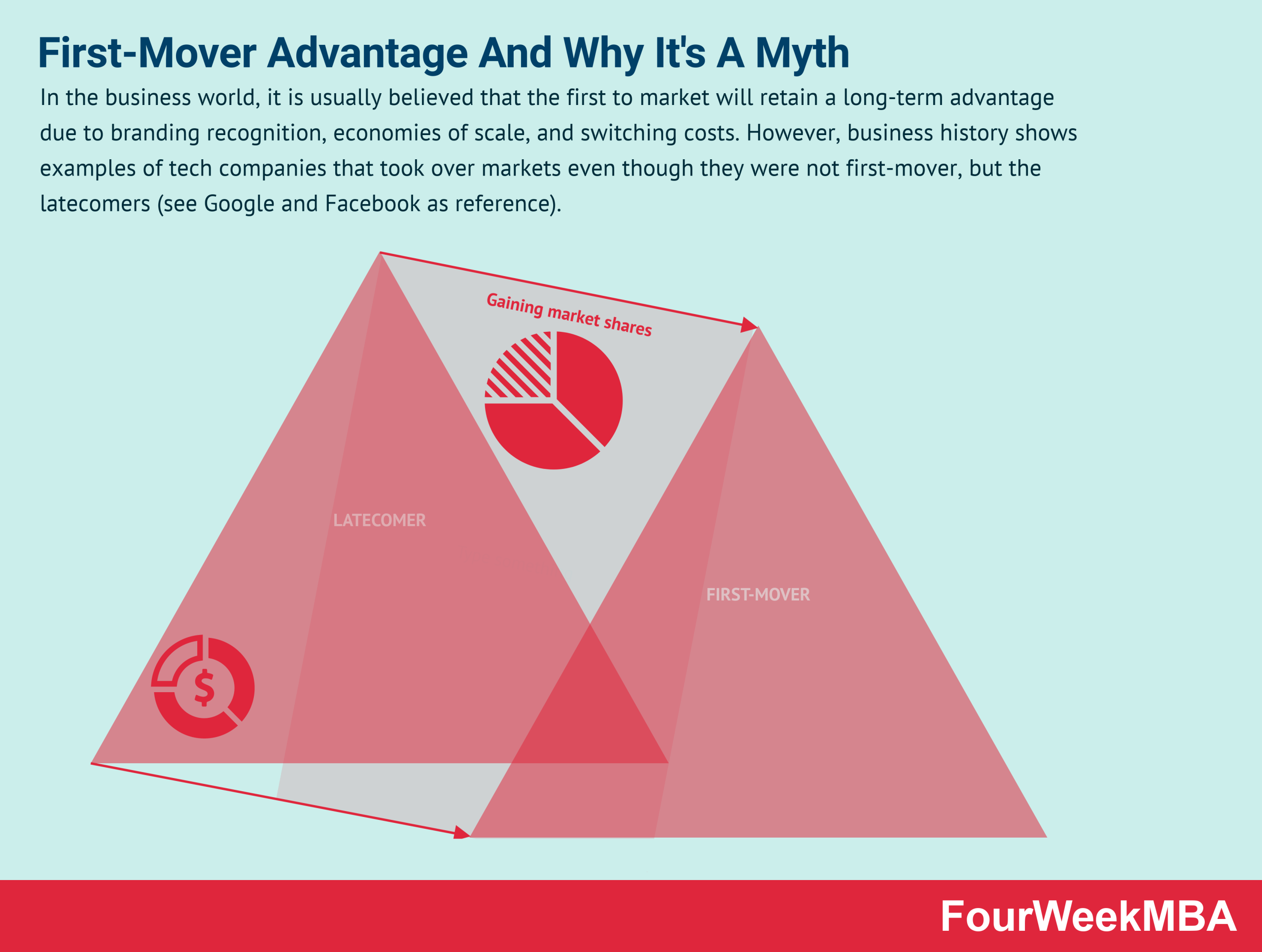 In the business world, it is usually believed that the first to market will retain a long-term advantage due to branding recognition, economies of scale, and switching costs. However, business history shows examples of tech companies that took over markets even though they were not first-mover, but the latecomers (see Google and Facebook as reference).

When you get into business school, one of the first principles they teach you is about the story of the first-mover advantage. As the story goes, when you’re the first to enter a market; things like branding recognition, economies of scale, and switching costs allow the first player to retain that advantage for a long time.

This is the conventional part of the story business professors like to teach so much. There is another part of it, which makes less noise and might sound less appealing but in the real business world is more accurate than the conventional first-mover advantage story. I’m talking about the last mover advantage. My argument is that – first movers not only are not supposed to win, but they might have a few drawbacks that make their moves very risky. This makes the last comer, who makes the last move in the position to dominate the market. In this article, we’ll see why and how.

Timing can make or break your business

As specified by Tech Crunch:

Segways, and websites like Six Degrees or services like Webvan, we saw the stumbling start of great ideas that were ahead of their time. We learned that when starting a company being right and too early is the same as being wrong.

When you’re the first mover, you’re seen as bold. This isn’t a chance. In fact, you’re taking a huge risk. Indeed, if you failed to gain traction and conquer market dominance, chances are you’ll be kicked out by the last comers. Not only that. But also market dominance isn’t enough if you’re not able to capture enough profits to be able to acquire or kick out the latest comers. Think about Google. When he got in the search market, it wasn’t the first.  In fact, in the 90s Netscape held 90% of the browser market. Only to disappear by the turn of the century. Why? Well, Google arrived last, but it built a monopoly able to capture most of the market value. Who can afford to compete with that?

Why Metcalfe’s law like so much the last mover

Metcalfe’s Law is a concept used in computer networks and telecommunications to represent the value of a network. Metcalfe’s Law states that a network’s impact is the square of the number of nodes in the network. For example, if a network has 10 nodes, its inherent value is 100 (10 * 10). The end nodes can be computers, servers and/or connecting users.

This means that when the last mover arrives on the market, it has one of the most important assets you can have in business: your competitors’ mistakes. In fact, if you are entering the market, you can do it by looking at what your competitors have done wrong. At the same time, you can also look at what they’ve done right to copy it! In this scenario, when growth picks up the effect of it will be more than exponential. So the first mover that seemed a giant will soon become the dwarf.

In Zero to One by Peter Thiel, there is a whole chapter on the last mover advantage. As he explains, when looking for a successful business one should ask:

Will this business be around a decade from now?

In fact, what he means is that – this is true for the tech world – the ability of a company to be the dominant player depends upon two main things. First, the ability to monopolize the market. Second, the ability of that business to generate future cash flows.

He suggests to look at four main aspects:

In the end, being the first mover doesn’t mean anything if you’re not able to build any of those factors into your business. The secret then is to be the last mover but then make sure you create a monopoly. How?

How to build a monopoly in four steps

In the book Zero to One, Peter Thiel also explains how – in theory – to build a monopoly.

The first objective is to start very small. We all like the grandiose project to conquer the world. Having that kind of vision is fine. Yet you want to be highly practical on a day to day basis. You need to start from a tiny group of people that might benefit from your product or service.

In fact, by targeting a tiny market, it will be way easier to monopolize it.

One example that Peter Thiel mentions in the book is about Amazon. When it started, it did as an online bookstore. This was, of course, a niche. Amazon could have tried to sell anything from day one. Instead, they focused on books. Until they dominated the market. As of now, Amazon has expanded so much also to sell grocery and gourmet food.

Thus, once dominated a niche, the time will be right to move to the next.

Stop with the BS of disruption

Looking like someone that is trying to innovate and challenge the status quo is cool. Yet it also brings a lot of attention and visibility. In the Silicon Valley startup stereotype visibility has become the goal rather than a means for growth. Instead, as Peter Thiel suggests in Zero to One, you don’t need to disrupt. In the long run, you will. But in the short term, you don’t have to challenge large organizations just for the sake of it. You need to work on dominating your niche and move on to the next. As quickly as possible; and with the slightest attention from the public as possible

Be like a chess player, think about the endgame

Having an ambitious long-term vision isn’t bad. Instead, this is the compass that will guide you toward the successful building of your business. In short, your long-term vision will be endgame. Just like the chess player starts with the last move in mind. However, targeting a small niche, dominating it, move to the next is your primary day to day goal.

Key takeaway: the last-mover takes it all

In this perspective, the last mover arrives at a stage when the public is ready to accept that product and service. It has learned from the first movers. It has copied them. It has avoided their mistakes. Used their strengths but also innovated. From that perspective, by starting small, dominating a niche, moving to the next. The network effects will allow the last mover to gain traction at an exponential growth rate that makes it impossible for the first mover to understand what’s happening and to stop its advancement. This is how the last mover takes it all!

A few other considerations about first vs. latecomer

When implementing a strategy, or building up a new market, a lot of work goes into educating this new market, perhaps around a technology. This effort takes years and it requires substantial resources. As the first-mover educates and builds up the market, if the market is not mature yet, the latecomer still has a wide space to attack the same market the first-mover dominates.

As long as the market is still growing, and the first-mover can’t yet lock-in distribution, the latecomer can manage to steal market share quickly, and establish itself as leader in that market, thus building up a long-term competitive advantage.

In the letter to shareholders in 2016, Jeff Bezos addressed a topic he had been thinking quite profoundly in the...