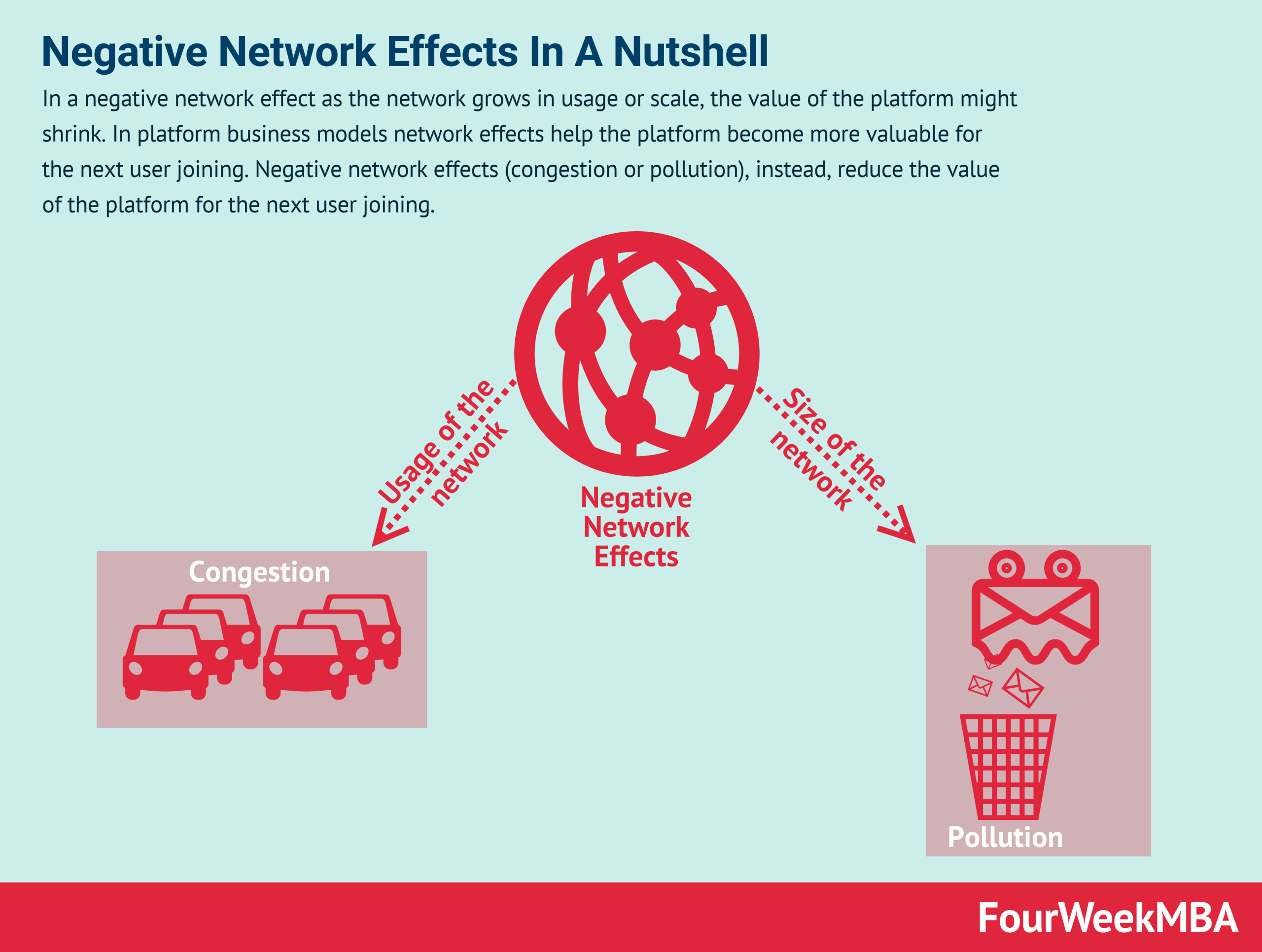 As highlighted in the interview with Sangeet Paul Choudary, author of Platform Scale and Platform Revolution:

The more people using the highway system, the more traffic jams you end up in. Or the more people in a room, the less likely it is to have good decent conversation just because it gets crowded, but also because everybody is talking too loudly and so you can’t hear and you can’t meet the right person within that room.

So we understand congestion in traditional terms because in the traditional world we have networks that were limited by scale.

When it comes to the digital world, instead, where there are less scale limitations. Or at least those those can be initially overcome.

Thus, at least on the congestion side it’s very hard to reach a point of negative network effects (for instance, if the platform crashes for usage).

Congestion, therefore, is primarily about usage of the network.

In the bits world, it is possible not only to overcome congestion but also to build a more solid engineering infrastructure as usage increases. Of course, network congestions can also be bad for platforms (poor network design, over-subscription, security attach due to over used network parts).

Another form, of negative network effect, can take place for platform business models.

Where network congestion is primarily about the size of the platform.

As the platform scales, it gains network effects, as it becomes more valuable for an increasing number of users.

Yet, also for digital platforms scale might create situations of diseconomies.

As highlighted in the interview with Sangeet Paul Choudary:

What happens is the more users come on board, the more difficult it becomes to manage quality of the interactions.

Thus this makes the digital platform to make sure to have a mechanism to manage the quality of those interactions to avoid that those negative network effects pick up.

If we think of social media, or publishing platforms at scale, among the most difficult task, that requires dozens if not hundreds of engineers and humans (Google might have thousands of human quality raters)  to fix spam and low quality user-generated content.

As highlighted negative network effects, dilute the value of the platform. And the way they can take over will depend on the kind of platform you’ve built. For instance:

In a platform that leverages on direct side network effects after a certain number of users, it might also result in increased spam on the platform which can’t be easily managed through automated processes, or human curation, thus diluting the value of the platform.

Take the case of how Google, back in the days, it was offering an index of the web with its core algorithm called PageRank. At a certain point had to figure out also how to manage the spam on its index.

Practitioners understood how to trick Google’s core algorithm into showing up spammy results on top of that. This would have jeopardized the value of the overall platform, thus resulting in a diluted value of that.

Thus Google had to start to build up a solid team dedicated to spam and update its algorithms to avoid spam in search results in order to keep its platform valuable.

Google has thousands of engineers and thousands of human quality raters focused on both preventing spam and on low-quality content.

In two-sided platforms, a kind of user joining the platform makes it more valuable for another type of user.

They will find themselves competing for the same users.

Thus it becomes crucial to understand what’s the proper ratio between travelers and hosts on the platform to make sure it keeps being valuable on both sides.

Take the case of a dating app which draws value from having people encounter locally. If more users join but from locations spread across the world, no much local network effects are picking up.

Quite the opposite. If a critical mass is not reached at each local hub, the platform might lose value quickly. Imagine the case of a woman looking for a date. The faster she will be able to meet the best match.

The more the platform will be valuable. However, to be very valuable, the service has to make sure those people can meet in a place nearby. And it there are no matches available locally, the dating platform would lose value quickly.

Platform business models can leverage network effects to enable the core platform to become more valuable over time. However, they need to factor in negative network effects, which if picking up might not only prevent the success of the business but also destroy it.