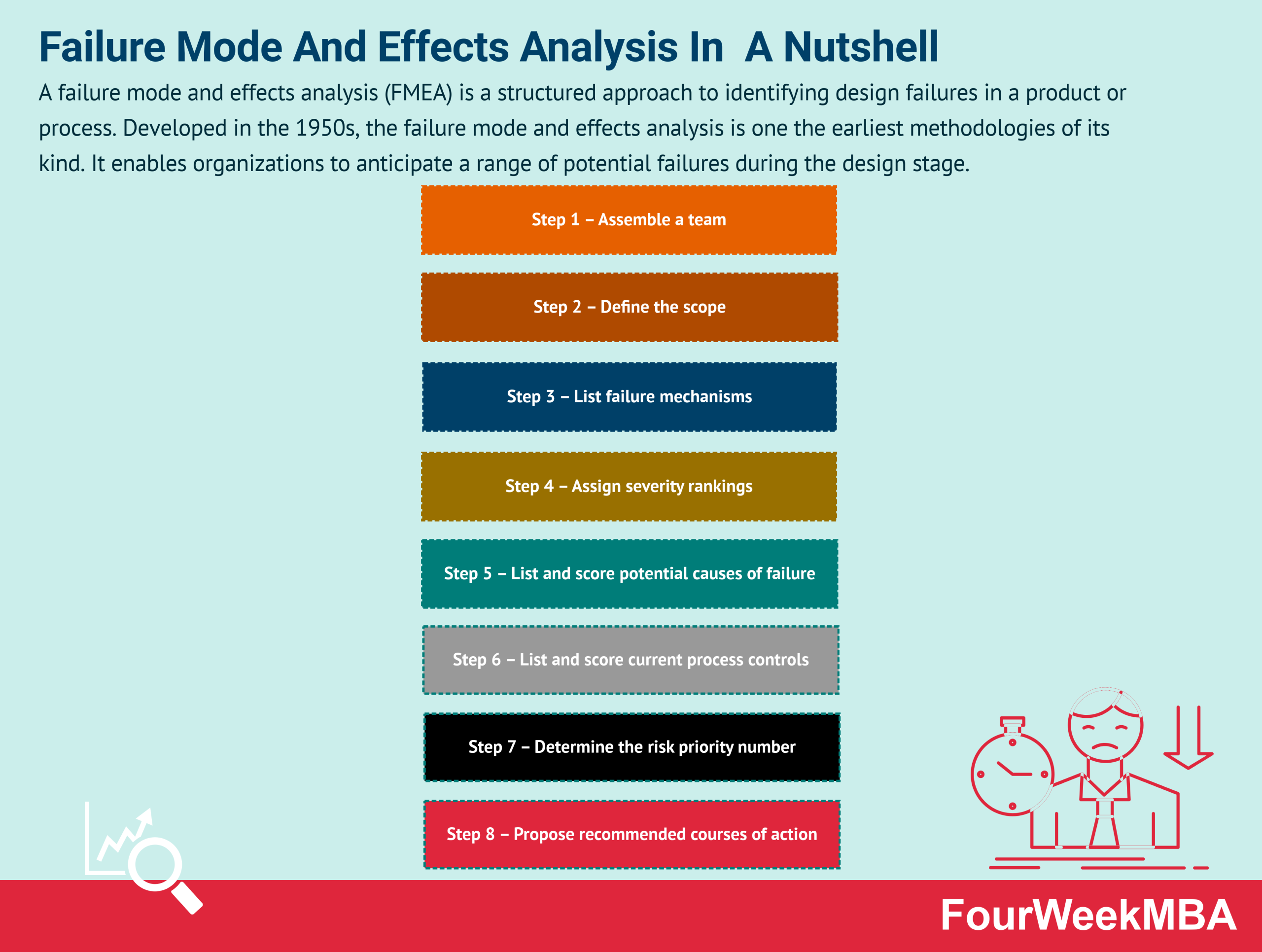 History is littered with examples of product recalls because of poorly designed products or processes.

One such example is the Takata airbag recall, the largest automotive recall in the world affecting an estimated 100 million vehicles. The recall was caused by design and manufacturing problems which lead to the airbag becoming highly explosive if exposed to high humidity.

Developed in the 1950s, the failure mode and effects analysis is one the earliest methodologies of its kind. It enables organizations to anticipate a range of potential failures during the design stage.

When conducting a FMEA, the team is prompted to evaluate the:

A FMEA should be performed using a simple spreadsheet. In general terms, here is how a typical business might run the analysis:

Start by creating a cross-functional team with a diverse range of knowledge about the process or product to be analyzed. This may include manufacturing, quality control, customer service, maintenance, or purchasing.

In other words, is the FMEA being used for a concept, system, process, or design? Where are the boundaries and what is the level of detail required? Process steps should be listed in rows at the far left of the spreadsheet.

List the ways that each process step can fail through brainstorming or the reviewing of existing documentation. This list should be exhaustive and many steps will have multiple avenues to failing.

Then, repeat the same process for the potential effects of each failure.

How could the failure effect occur? For example, a bank customer could become dissatisfied (failure effect) because of an ATM running out of cash (failure cause).

For each potential failure cause, rank it according to how frequently it is likely to occur. Rare occurrences receive low scores, while frequent events receive higher scores.

What are the existing controls that prevent the failure mode from occurring? Some controls may only detect failure modes after they occur.

Returning to the previous example, the bank might receive an internal alert that cash in the ATM is running low.

Each control should then be scored according to its ability to detect the occurrence of a failure event. A failure event that is easily detected by a control is given a low score while a higher score is assigned to an inconspicuous failure event.

The risk priority number (RPN) is the overall risk score of an event. It can be calculated by multiplying the severity, occurrence, and detection scores together.

A process step with a higher RPN demands immediate attention. Lower RPN steps are at less risk of failure.

Lastly, the team should propose a course of action for:

Actions that reduce risk ultimately involve eliminating the failure or addressing the cause of the failure. Processes can also be improved by increasing design tolerance and reducing variation in process output quality.

A stakeholder analysis is a process where the participation, interest, and influence level of key project stakeholders is identified. A...