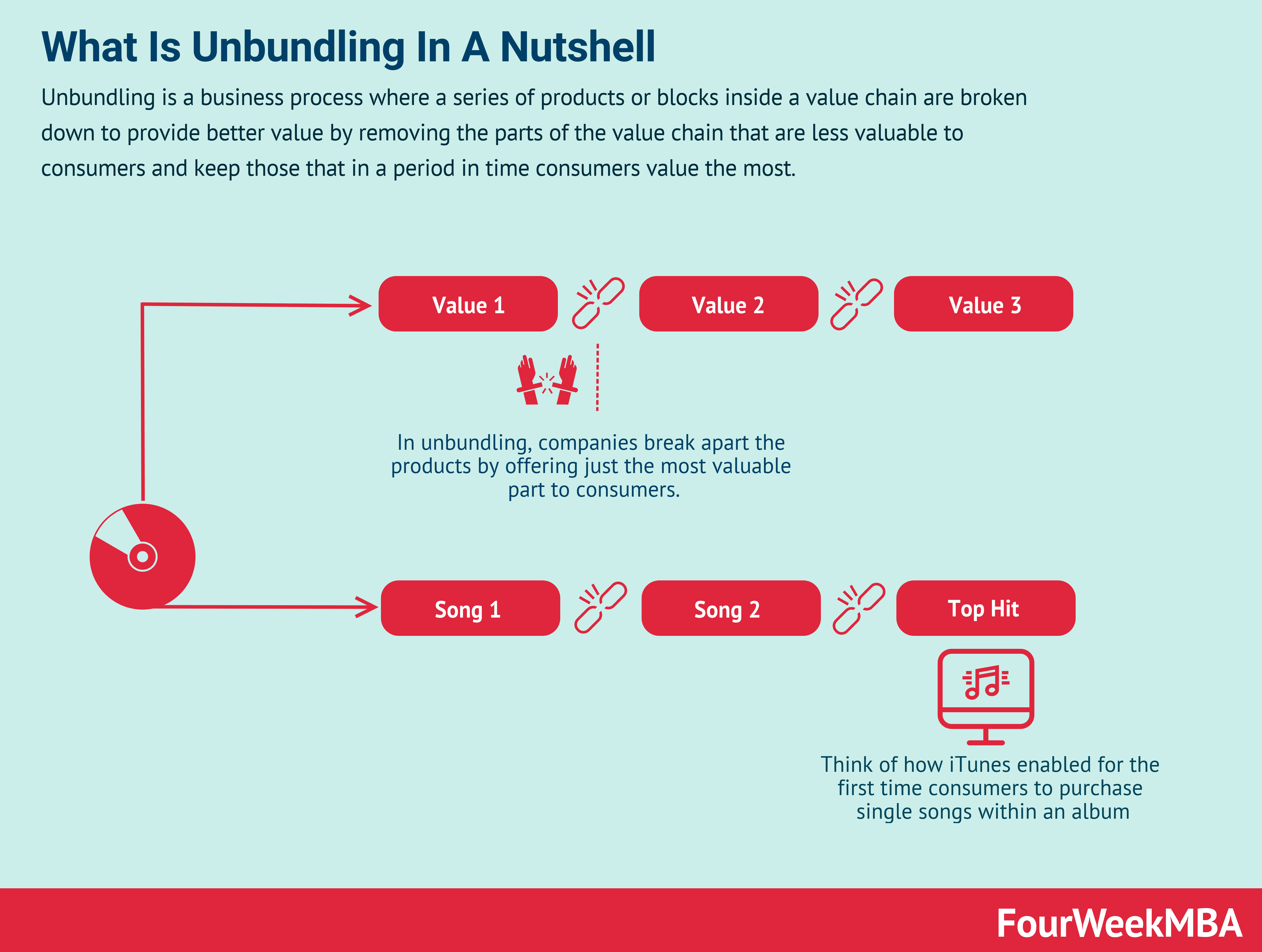 Unbundling is a business process where a series of products or blocks inside a value chain are broken down to provide better value by removing the parts of the value chain that are less valuable to consumers and keep those that in a period in time consumers value the most.

What does unbundling mean in business?

Usually in business, depending on the context, companies might gain a competitive advantage by either bundling or unbundling some of the activities within a value chain.

Usually, when a company has gained monopoly power it will use bundling to make consumers get its whole set of products and lock them, by levering on their existing distribution networks (Microsoft Windows is an example).

Unbundling is the opposite process when a newcomer enters a traditional and established industry by removing the parts of the value chain less valuable to consumers and only capture the monetizable and highly valued part (think of how Amazon unbundled retail stores).

What are some examples of bundling?

Some examples of bundling comprise:

As Microsoft became a tech giant throughout the PC era, it managed to build such a strong distribution network, to be able to lock in consumers in the PC market for decades. Indeed, Microsoft bundled its Windows in computers before they got purchased.

Bundling if abused by a monopolist can turn into anti-competitive behaviors.

One of the most successful Google’s acquisition has been Android, which enabled the company to stay on top of the game throughout the mobile devices era. In this context, some Google products (such as Google Chrome) are bundled by default within hardware Andoird devices.

This enables Google to keep also a competitive advantage in its core business model, as the company can capture the whole data pipeline.

When does bundling lose its impact?

When a technological wave loses traction, bundling becomes ineffective. Indeed, when a new technological wave comes in, products that before dominated it become obsolete, thus opening the space for new companies to take over the distribution pipelines.

For example, as the PC era is deteriorating Microsoft is quickly losing its bundling power with the Windows products.

Another example is how – when the mobile era will end – the Google business model will lose its bundling power.

Bundling can last decades depending on how long a specific technology is popular, and for how long a company can keep its dominant position.

What are some examples of unbundling?

Unbundling becomes extremely appealing when a whole industry has been built on the building logic. Therefore, the player able to come in, identify the most valuable part of the value chain for the consumer and offer it at a more convenient price (thus breaking the trade-off between value and cost at the core of a blue ocean strategy) unbundling becomes a powerful force.

When Apple introduced iTunes it unbundled the CDs and albums. You no longer needed to buy an entire CD to listen to the single song you wanted. Therefore Apple‘s iTunes unbundled CDs by offering single songs at $99 cents.

When Amazon enabled consumers to buy at convenient price and selection on its platform it started to unbundle retail. In short, on Amazon, you could pick only what you wanted the most, by navigating through several online stores at once. This process is still ongoing and a powerful force.

When Google indexed the whole web, it enabled readers to pick articles from several websites without having to go through part of them that they might have found less interesting (classified ads, job boards and so on). Therefore, in a way, Google worked as an unbundling force toward the publishing industry.

When does unbundling make more sense?

If you are a newcomer in an industry where unbundling can guarantee strong growth, that can serve as a competitive advantage. As existing players that control the market might be too slow, ineffective and in a conflict of interest with their own consumers, the unbundled has a great opportunity to take over.

Bunding and unbundling in continuous conflict and balance

It’s interesting to notice how bundling and unbundling might be tied to how companies evolve. When a company took over an industry that becomes mature, eventually the company that once leveraged on unbundling to take over an industry, it will become the one who bundles to leverage on its distribution network.

At that stage, newcomers surfing the wave of an emerging and fast-growing industry can use unbundling as a core business strategy.

Other waves driven by the web era

The digital era has brought to several business waves, that led to the creation of new industries and companies, once newcomer, then become giants themselves.

Let’s look at some of those trends that were shaped and shaped the business world in the web era.

Where Unbundling looks at the product offering to break down what’s most valuable and offer it more conveniently. Disintermediation looks primarily at distribution to understand what actors can be driven off the market, as they primarily work as fragmented intermediaries.

The classic example is how platform business models have been disintermediating several industries. As they did so, former intermediaries were wiped out, and the whole market grew.

Yet, this process often leads to the consolidation of a new ecosystem created by the super platform.

For instance, as Amazon is disintermediating the delivery industry, with last-mile delivery, that might create a situation where key players, that have existed for decades (FedEx, DHL), might be kicked out of the marketplace, or perhaps just remain niche players, with marginal market shares.

This process of reintermediation will help industries and markets to be born on top of new ecosystems, made of incentives and disincentives.

In a decoupling process, the decoupler takes the most valuable part of the customer value chain, and it offers it to customers. That is how it gains traction.

In a coupling process, instead, the coupler expands in new areas and activities that might seem disconnected to the overall business model, and yet, the way those activities are offered to final customers, also enhance the whole business model.