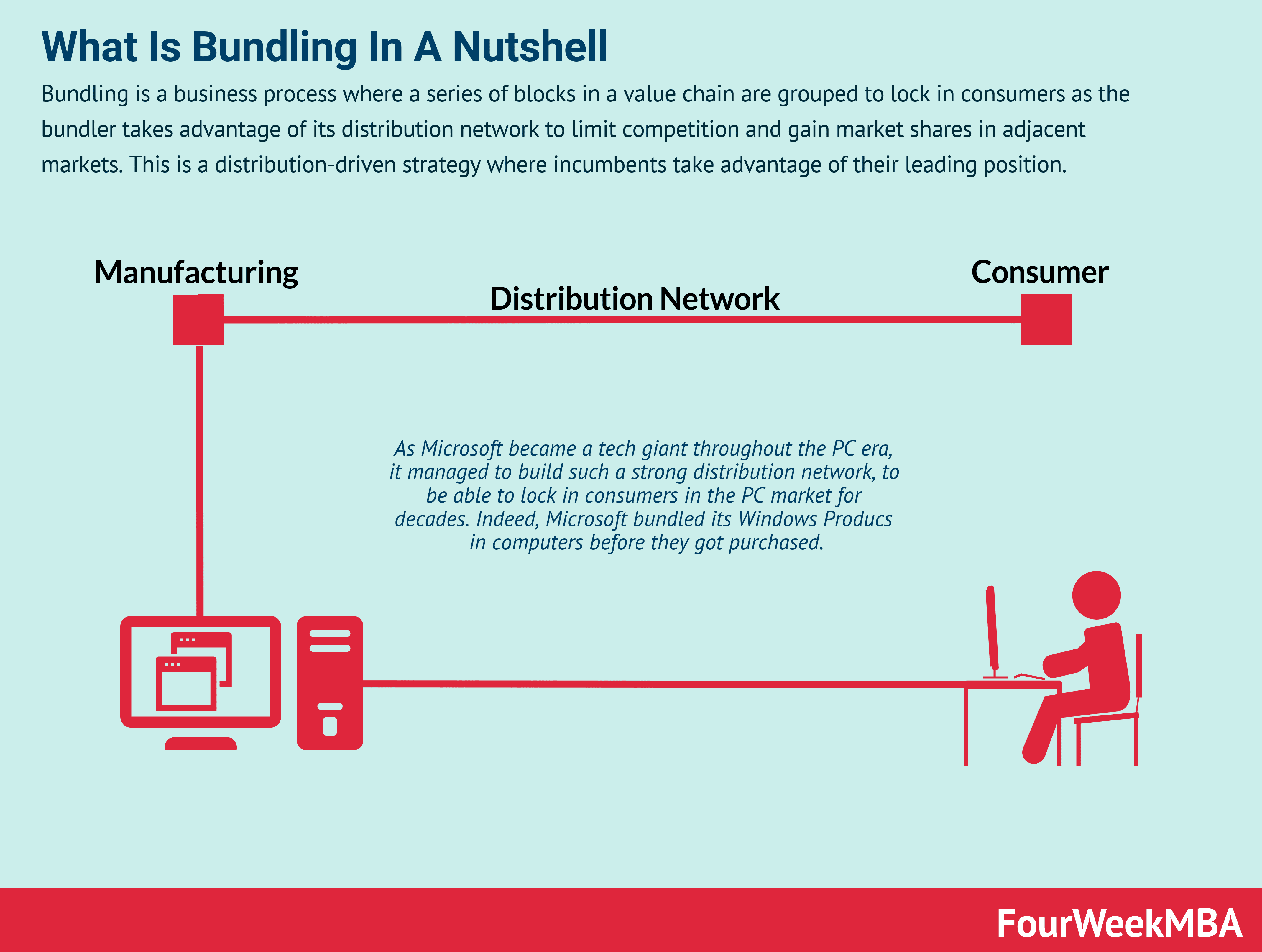 Bundling is a business process where a series of blocks in a value chain are grouped to lock in consumers as the bundler takes advantage of its distribution network to limit competition and gain market shares in adjacent markets. This is a distribution-driven strategy where incumbents take advantage of their leading position.

Usually, when a company has gained monopoly power it will use bundling to make consumers get its whole set of products and lock them, by levering on their existing distribution networks (Microsoft Windows is an example).

Unbundling instead is a business process where a series of products or blocks inside a value chain are broken down to provide better value by removing the parts of the value chain that are less valuable to consumers and keep those that in a period in time consumers value the most.

What is an example of bundling?

As Microsoft became a tech giant throughout the PC era, it managed to build such a strong distribution network, to be able to lock in consumers in the PC market for decades. Indeed, Microsoft bundled its Windows in computers before they got purchased.

A business model primarily built on bundling if abused by a monopolist can turn into anti-competitive behaviors.

Usually in business, depending on the context, companies might gain a competitive advantage by either bundling or unbundling some of the activities within a value chain.

Usually, when a company has gained monopoly power it will use bundling to make consumers get its whole set of products and lock them, by levering on their existing distribution networks (see Microsoft Windows).

Unbundling is the opposite process when a newcomer enters a traditional and established industry by removing the parts of the value chain less valuable to consumers and only capture the most valuable part (think of how Amazon unbundled retail stores by designing in a whole new experience, that leveraged on digital real estates).

The digital era has brought to several business waves, that led to the creation of new industries and companies, once newcomer, then become giants themselves.

Let’s look at some of those trends that were shaped and shaped the business world in the web era.

Where Unbundling looks at the product offering to break down what’s most valuable and offer it more conveniently. Disintermediation looks primarily at distribution to understand what actors can be driven off the market, as they primarily work as fragmented intermediaries.

The classic example is how platform business models have been disintermediating several industries. As they did so, former intermediaries were wiped out, and the whole market grew.

Yet, this process often leads to the consolidation of a new ecosystem created by the super platform.

For instance, as Amazon is disintermediating the delivery industry, with last-mile delivery, that might create a situation where key players, that have existed for decades (FedEx, DHL), might be kicked out of the marketplace, or perhaps just remain niche players, with marginal market shares.

This process of reintermediation will help industries and markets to be born on top of new ecosystems, made of incentives and disincentives.

In a decoupling process, the decoupler takes the most valuable part of the customer value chain, and it offers it to customers. That is how it gains traction.

In a coupling process, instead, the coupler expands in new areas and activities that might seem disconnected to the overall business model, and yet, the way those activities are offered to final customers, also enhance the whole business model.

Customer segmentation is a marketing method that divides the customers in sub-groups, that share similar characteristics. Thus, product, marketing and...