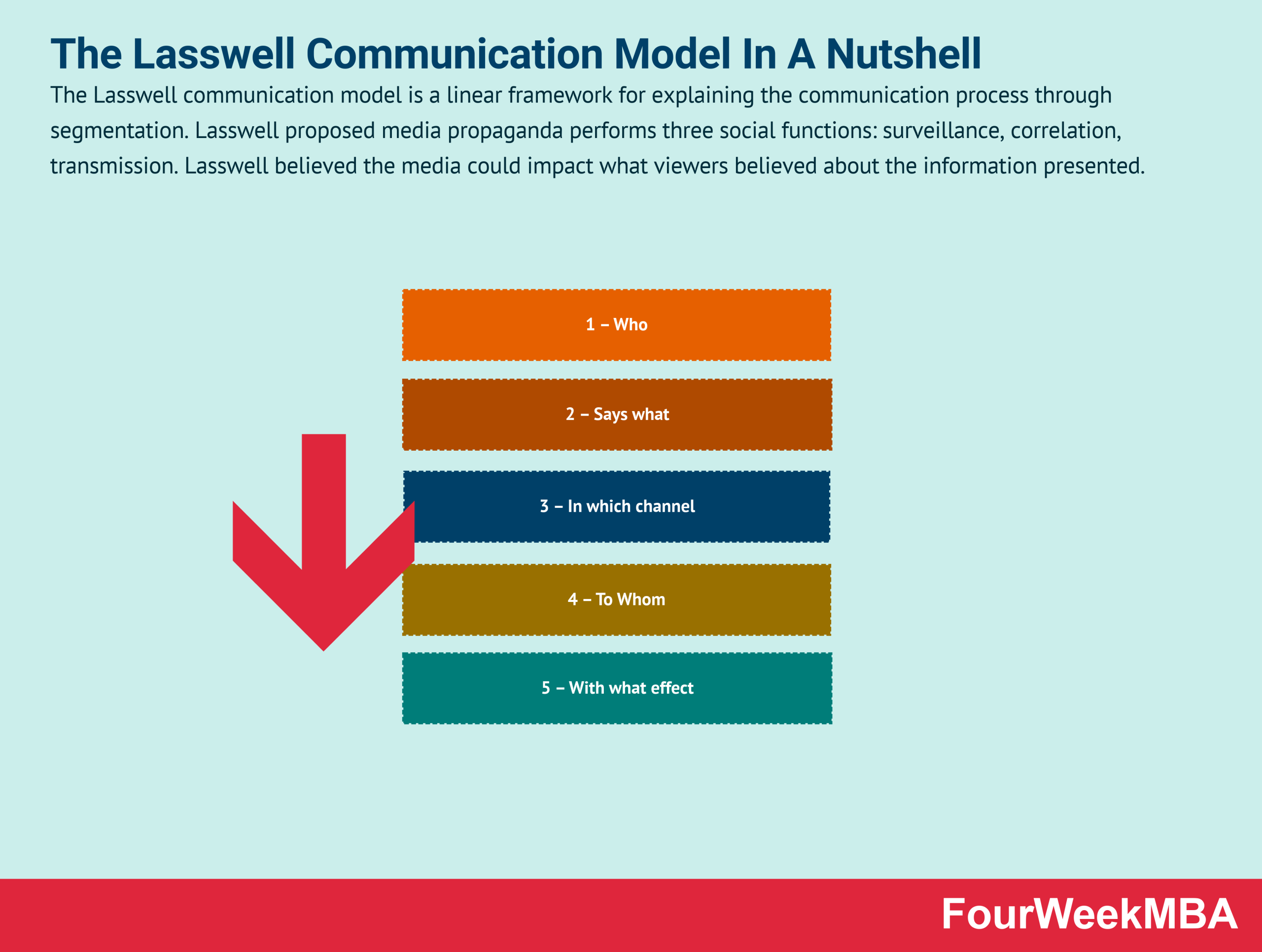 Lasswell, a former Yale University professor, developed the model in 1948 to analyze mass communication and the effect of media propaganda in various countries and businesses. To that end, he proposed media propaganda performs three social functions:

In general terms, Lasswell believed the media could impact what viewers believed about the information presented. This notion can be extended to any communicator, whether it be a person, group, or business.

Regardless of the context, however, the communicating entity has some intention to influence the receiver through messaging. This means Lasswell’s model treats communication as a persuasive process.

The five components of the Lasswell communication model

Five components can be used to predict the effect a message has on a person or group of people, with each having its own analysis method.

Let’s take a look at the five components below:

The communicator, sender, or source of the message. This may be a person or an organized institution like a newspaper, radio station, website, or television station.

Here, Lasswell argued that a control analysis should be used to critique the sender on how they exercise control and power over the message being disseminated. Do they have authority on the topic? Do they have a political agenda or some other bias? How have they reported on similar events in the past?

Put simply, the message being communicated. This may include a news story, fairy-tale, biblical story, political story, or story with an important take-home message.

In this case, Lasswell favored a content analysis where a transcription of the message is scrutinized. This enables the receiver to identify recurring themes, highlight important passages, and identify how the message distorts the truth.

This describes the medium or media used to disseminate the message, such as social media, photography, books, blogs, television, radio, letters, and magazines.

When Lasswell developed his theory in 1948, he had access to a very small number of media. But the premise remains the same today, with a media analysis determining the medium most suitable for sending a message to a particular audience.

This is the receiver of the message, which may be an individual or an audience. In the context of mass communication, the audience may constitute:

In the fourth component, audience analysis is key. This categorizes the preferences of audiences according to:

Or the feedback the receiver gives to the sender. In marketing, the feedback the business wants to receive is the consumer spending money. However, desirable feedback may also include changed voting preferences, increased brand awareness, or public awareness of a health issue.

To measure the impact and prevalence of feedback, an effects analysis is undertaken. For modern businesses, feedback can be attained almost instantaneously. An eCommerce business will know how long a consumer spent on their site before purchasing. Similarly, it will also receive feedback on a recent advertising campaign and be able to make important strategic adjustments.