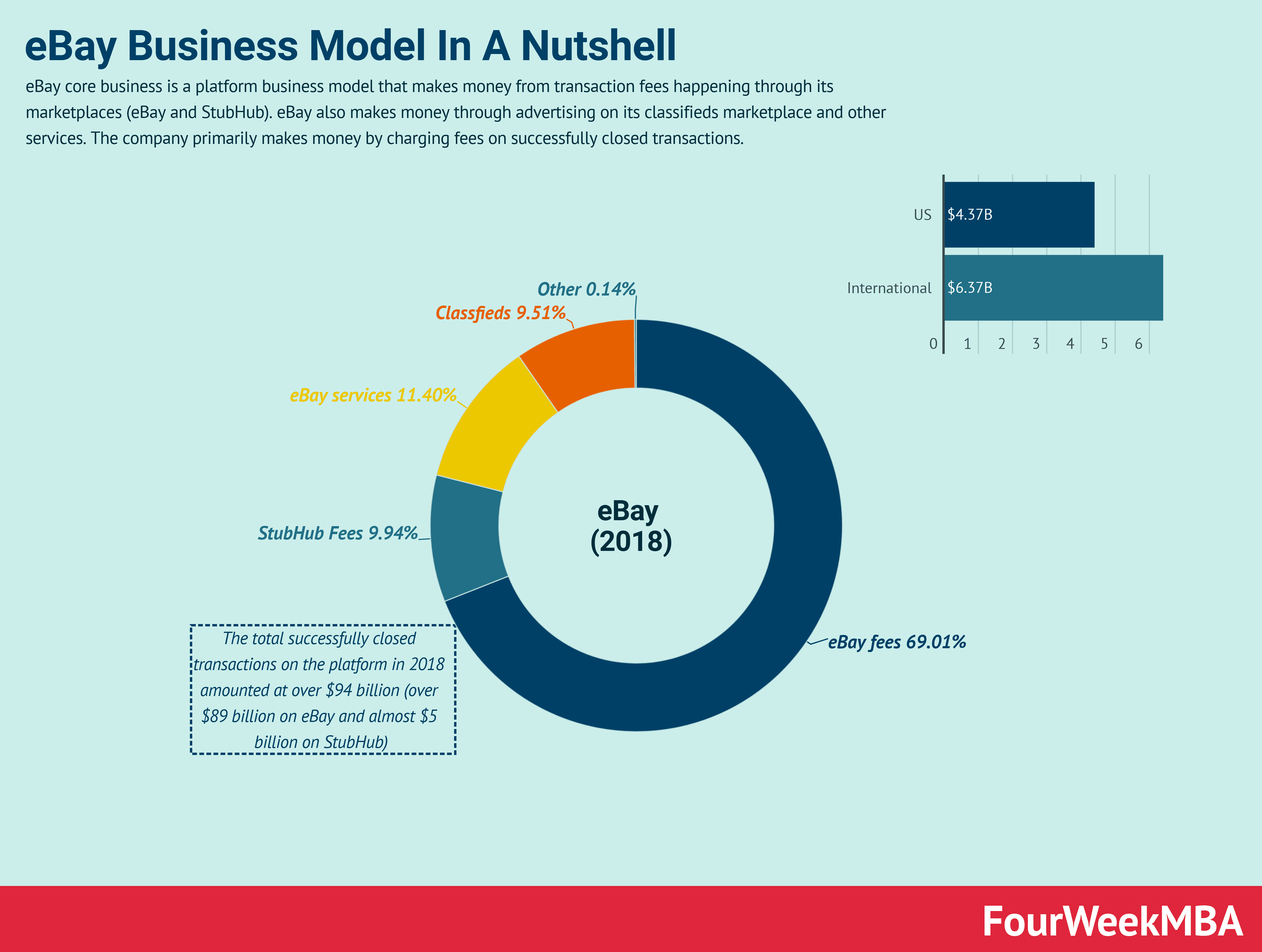 eBay core business is a platform business model that makes money from transaction fees happening through its marketplaces (eBay and StubHub). eBay also makes money through advertising on its classifieds marketplace and other services. The company primarily makes money by charging fees on successfully closed transactions.

As reported in its financial statements, in 2018, eBay had an active buyer base of 179 million, it drove $95 billion in Global Merchandise Volume (the volume of successful transactions happened on the platform and it generated over $2.5 billion in net income.

eBay Inc. was formed as a sole proprietorship in September 1995 by Pierre Omidyar. Before that, on Labor Day of 1995, eBay was called Electronic Bay, then Auction Web eBay, and it had no guarantees, no fees or any mechanism to moderate disputes on the platform, nor payments platforms integrate (eBay would, later on, purchase PayPal, that would be then spun-off in 2015).

As the story goes, cheques would start to pile up so much on Pierre Omidyar desk that he head to finally move those to a business account, and scale what would become one of the most valuable internet companies, which would IPO by September 1998 (about three years after its launch).

Back in 1998, that is how the company would get described in its financial prospectus:

eBay is the world’s largest and most popular person-to-person tradingcommunity on the Internet. eBay pioneered online person-to-person trading by developing a Web-based community in which buyers and sellers are brought together in an efficient and entertaining auction format to buy and sell personal items such as antiques, coins, collectibles, computers, memorabilia,stamps and toys.

We are fiercely loyal in protecting eBay’s unique advantage as a true marketplace in service of small independent businesses, consumer sellers, and buyers, and working to dramatically simplify the buyer and seller experience.

As mentioned in the 2018 Shareholders’ Letter eBay highlights its key strength as that of empowering independent sellers and businesses. That is a key point to emphasize, as it enables us also to understand why eBay is at its core platform business model, and how it is different from other companies like Amazon.

What are the core value propositions of eBay?

As a platform business model eBay has two core players:

The company is focusing in the coming years toward:

Great selection and value are at the core of the eBay business model, which includes “new, everyday items as well as rare and unique goods.”

What value does the platform drives for each of its key players?

Unlike other digital commerce businesses, we don’t compete with our sellers and we refuse to compromise the shopping experience to push “house brands” and irrelevant posts. Millions of small businesses and consumers sell only on eBay. I believe it’s because of our purpose and policies — this matters to customers. We fundamentally object to unnaturally bundling services to overcome barriers to competition. At eBay, we empower third party sellers to thrive, which actually serves consumers seeking value and selection. We are a benchmark on this. We always have been.

In its 2018 Shareholders’ Letter, eBay emphasizes the fact that the platform doesn’t compete against its third-party sellers, as it happens instead on a platform like Amazon, which while enables third-party sellers to host their products on top of Amazon e-commerce, it still also features its own branded products.

This is a key difference between eBay and Amazon.

In addition, where Amazon takes the money from transactions, then paying a fee to third-party sellers. eBay instead, primarily takes a fee on a successful transaction.

In short, Amazon‘s key strength is on managing the cash generated through the platform. Where eBay primary strength is its ability to connect buyers and sellers on a wide variety of items not necessarily available elsewhere.

How does eBay really make money?

What are the key metrics to understand eBay business model?

Each company’s business model has its own logic, and as such, it measures its success through a set of metrics. For eBay those are:

Gross Merchandise Volume (“GMV”) is defined as the volume of successfully closed transactions between users on eBay Marketplace and StubHub platforms.

This is a useful metric to understand the volume of transactions happening on the platform.

For instance, in the eBay marketplace, the transaction take rate was around 9%.

How does eBay primarily spend money to make money?

That might sound trivial but in order to make money, companies must spend money. Depending on the kind of business model you might be running also the key expenses to make the bottom line work out might change.

In eBay’s, those key expenses can be summarized as customer support, site operations, and payment processing, which amounted to over $2.3 billion, or over 22% of its total revenues in 2018.

Other key expenses are related to sales and marketing (32% of total revenues in 2018) primarily consisting of advertising and marketing program costs (both online and offline), employee compensation, user coupons and rewards, contractor costs, facilities costs and depreciation on equipment.

Other key expenses related to product development and other general and administrative expenses.

I covered in the PayPal business model how the company got at a certain point acquired by eBay in 2002 for $1.5 billion. At the time PayPal needed a strong payment processing system within its core platform.

As the years went by PayPal growth went far beyond eBay, which had worked as primarily growth driver for the company in the first years of operations. Until PayPal itself became more valuable than eBay.

Read next: PayPal Business Model In A Nutshell