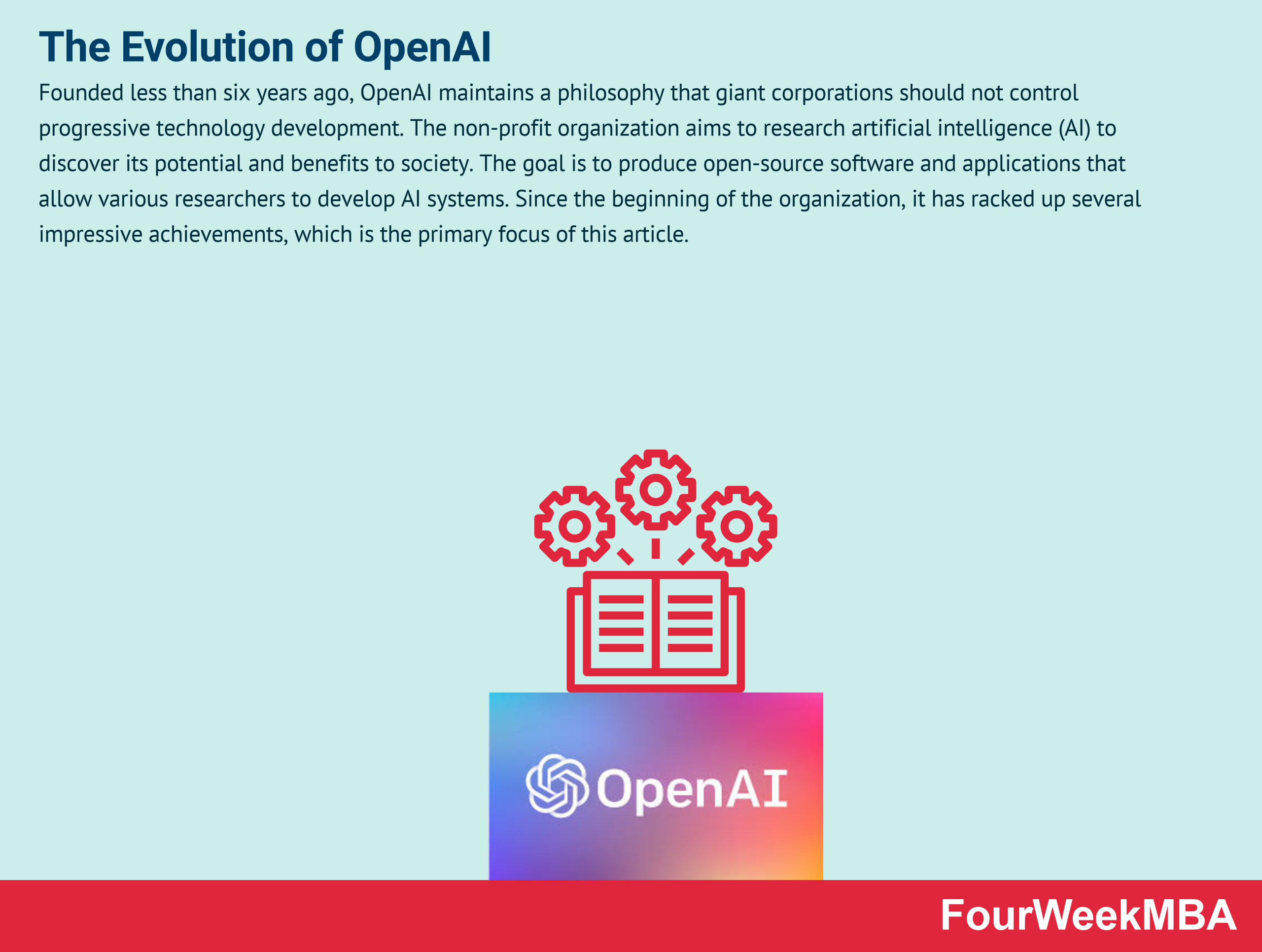 Founded less than six years ago, OpenAI maintains a philosophy that giant corporations should not control progressive technology development. The non-profit organization aims to research artificial intelligence (AI) to discover its potential and benefits to society. The goal is to produce open-source software and applications that allow various researchers to develop AI systems. Since the beginning of the organization, it has racked up several impressive achievements, which is the primary focus of this article.

The non-profit organization OpenAI established a research laboratory that aims to promote AI tech that benefits society. It was initially founded in late 2015 by several entrepreneurs, including Elon Musk, Sam Altman, and many others. They all pledged $1 billion to support the development of AI systems that are developer-friendly. Although Musk resigned from the organization after three years, he remained a donor and an advocate for OpenAI.

The organization seemingly drifted away from its initial objectives of avoiding developing software to generate financial returns. In 2019, OpenAI accepted a $1 billion investment from Microsoft, one of the world’s most prominent tech companies.

OpenAI Products Throughout the Years

The organization was structured to be non-profit to focus on its main goal ⁠— researching AI technology. The primary purpose of OpenAI is to leverage artificial intelligence that brings a positive, long-term impact. There are always risks in advancing a powerful technology such as AI. Exploring such complex technology tends to become abused. With such great power, they make it their mission to guarantee a positive and prosperous future. Overall, the organization develops technologies to empower people to utilize AI for the betterment of the world.

The focus of OpenAI research goes beyond artificial intelligence itself. They dived into the paradigm of machine learning called reinforcement learning. It involves the training of learning models that become the basis for future actions. With that in mind, here are the products and applications that OpenAI developed throughout the years.

One of the first software that the non-profit organization created is called Gym. It is an open-source library where researchers can discover reinforcement learning algorithms. This software provides a plethora of opportunities for developers to explore various AI environments. The toolkit also involves AI research publications for easier discovery of their latest developments.

In late 2017, developers failed to maintain the documentation site and transferred information regarding their recent work on Open AI’s GitHub page.

RoboSumo involves humanoid “meta-learning” robots that compete against one another. The main goal is to let simulated AI technologies learn physical skills, including ducking, pushing, and moving around. While in the arena, the competitive environment creates an intelligence that allows AI to overcome adversity and adapt to changing conditions. The result of this research concluded that agents face a whole new environment with high winds. Through adversarial learning, it applied its newfound intelligence in a generalized way.

The Debate Game is another application developed by Open AI in 2018. Machines debate various toy problems in the presence of a human judge. In hopes of developing explainable AI, this research explores the influence of AI in making crucial decisions.

One of the most important subjects that Open AI explored is generative models. To determine the capabilities of artificial intelligence, researchers leveraged these models. It involves training the models through the large volumes of data generated from a domain. For instance, generative models read a book to reinforce their learning and create data that resembles it.

For this to be more successful, the neural networks integrate into multiple parameters significantly smaller than their training networks. In this way, the models need to explore the data’s extent independently and generate a copy.

The first-ever publication on the language model of generative pre-training (GPT) unveiled in June 2018. Researchers developed in-depth data about how the generative model of language acquires knowledge from the Open AI website.

As the successor to GPT, GPT-2 utilizes generative models to predict the following words within a 40-gigabyte internet text. This transformer-based language model can reach 1.5 billion parameters on a data set of 8 million pages. Reinforcement learning gets leveraged to train models on a simple objective, which predicts the next word. It is after being provided with strings of text that talk about a particular topic. Although the models get exposed to diverse domains, it is fascinating that they can predict text within the sample text context.

GPT-2 can perform tasks involving question answering, reading comprehension, summarization, and translation. The models begin to predict text accurately after learning from a couple of language tasks that showcase raw text. As a result, tasks can get achieved while unsupervised.

Following the concerns about the potential abuse of such advanced technology, Open AI did not release the training model for GPT-2. However, those who are interested can still experiment on a smaller model to try out its capabilities.

GPT-3 was initially introduced by Open AI in May 2020. Access to the private beta version of this technology is only available to a few people that sent requests before the release. Open AI is encouraging those with access to explore the capabilities of GPT-3. GPT-3 should be integrated with business operations as a commercial product shortly. The ultimate goal is to set up subscription-based payment options for those who want to take advantage of the model via the cloud. However, GPT-3 was acquired to be licensed exclusively to Microsoft in September 2020.

As a predecessor to GPT-2, it improves the predictive capacities when exposed to streams of texts with a range of different styles. Increasing its parameters to 175 billion, GPT-3 strides as the leading language model that surpasses certain limitations that cannot be overcome by GPT-2.