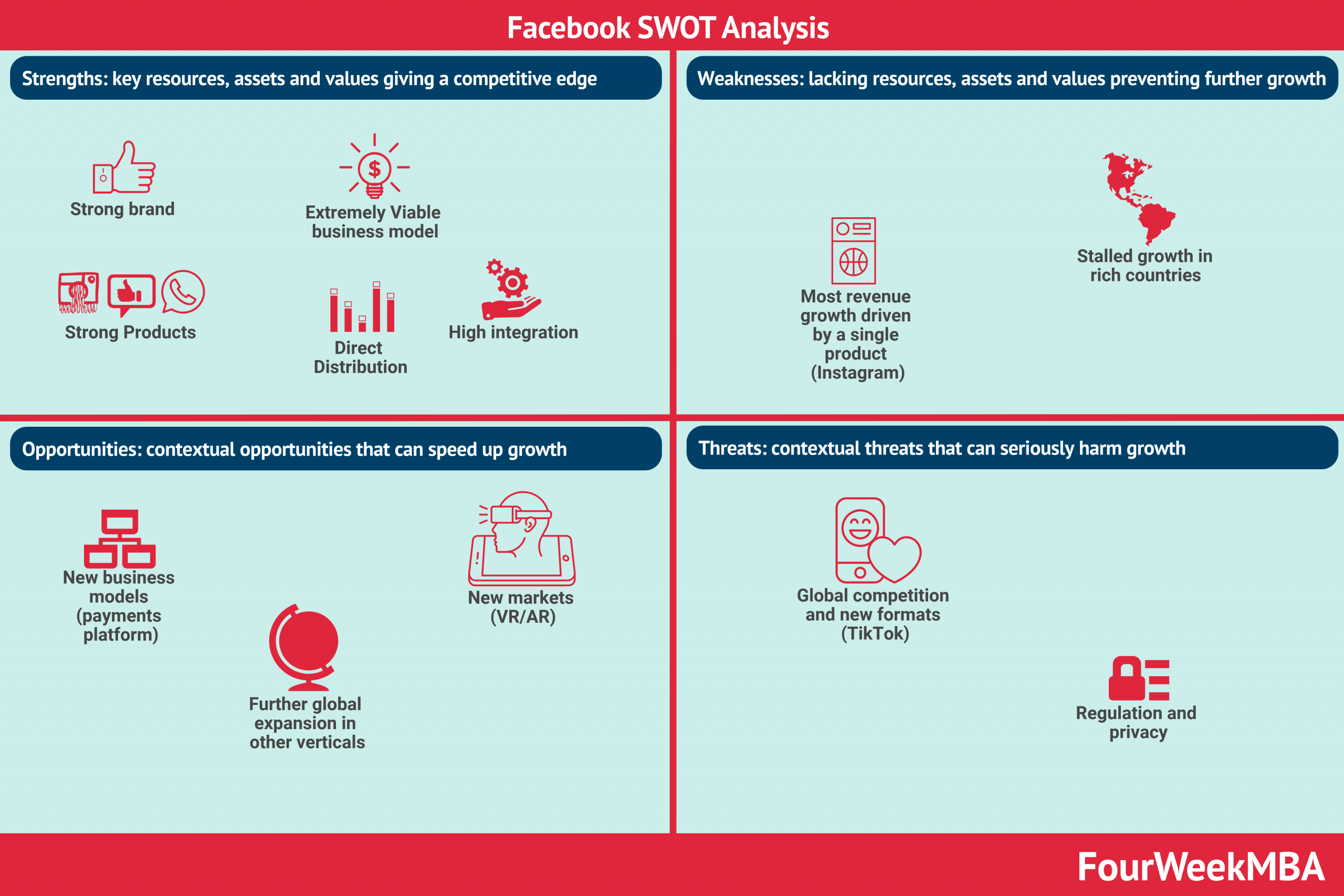 Facebook, with its products, with its strong appeal, and consumer brand has a solid business model, threatened in the last years by privacy concerns, which open up the way to potential regulation to break up the company. If that will not happen, Facebook will have the chance to expand to define other markets like VR.

Facebook Inc. has been able to build a strong consumer digital brand for its core products (Facebook) and the set of product parts of the holding group (Instagram, WhatsApp, Messenger, and Oculus going forward).

Over the years, Facebook has undertaken an effective acquisition strategy, where it managed to buy products that would eventually become strong consumer brands (Instagram and WhatsApp). Those products today are still trendy and tied to the daily habits of hundreds of millions of people across the world.

Those same products are well integrated to form a whole Facebook ecosystem. For instance, Instagram advertising can be run directly from the Facebook Ads main platform, and WhatsApp might, in the future, also connect with that. Also, those products already share strategic parts that make the whole Facebook ecosystem highly integrated, even though the user is let free to experience each of those platforms separately.

Facebook is among the most profitable companies on earth. With its mostly digital services, the company has built the strongest digital advertising machine (together with Google).

Facebook also enjoys mostly a direct distribution, which is tied to the strength of its brands, as its apps are on top of mind for hundreds of millions of people they also traveled with a quick word of mouth mechanism, where people would download them as soon as bought a new mobile device. That made it easier for Facebook products to scale up.

As the mobile market (smartphones) saturates so does the ability of the growth of the Facebook products also slows down, especially in wealthier counties, where Facebook has reached a mature level. of penetration.

Most revenue growth is driven by a single product (Instagram)

Facebook successfully completed the transition to mobile a few years back, and that paid off. Indeed, today most of the advertising revenues come from mobile traffic, and from Instagram. This, however, also skewed Facebook revenues toward a single product and a single format, which opens up the way for competitors to compete.

Facebook has been growingly under the radar of regulators as more privacy scandals have risen concerns about how the company handles the data and whether, after all, a business model that scaled to billions of users, can be based on advertising alone, and whether this would be in conflict of interests with the users‘ data, which is among the most valuable asset on Facebook. Facebook has already been fined for $5 billion dollars by the F.T.C. back in 2019, which while is the largest fine probably issued for users’ data breach, which represented just a bad quarter for Facebook, nothing more. Thus, the potential threat of regulation is on the potential breaking of the company and fines that can also pass the $5 billion mark.

In the past decade when new formats came along Facebook was successful in acquiring them (Instagram) or replicating them (Snapchat). However, the rise of new formats, and companies like TikTok, raise the question on whether Facebook would be able at this time to contrast the growth of it, and if that might turn in a valid competitor eroding part of Facebook‘s market share. True though, that TikTok itself is opening up a new category, which might result in a market with a scale, even larger than what social media offered.

Further global expansion in other verticals

Facebook and its products have still the ability to expand in other verticals to make their products more and more engaging. For instance, during the pandemic, Facebook released on its products important updates about video chat, to enable more and more people to do all within the Facebook products. This makes it possible to improve further the engagement of those products.

Facebook is also integrating with its product payment frameworks that might enable the company to start collecting commission within its platform, thus enabling it to diversify its business model.

Mark Zuckerberg is among the firmest believer in VR and the fact that the VR will be the next comprehensive tech platform. If that will be the case, this will open up much bigger market opportunities, as in the VR, the experience would be so comprehensive that Facebook would become much more than just an entertaining app, but it would convert into a Super Platform.

Read more: What Is A SWOT Analysis

Are You A Price Setter Or A Price Taker?

A price maker is a player who sets the price, independently from what the market does. The price setter is...