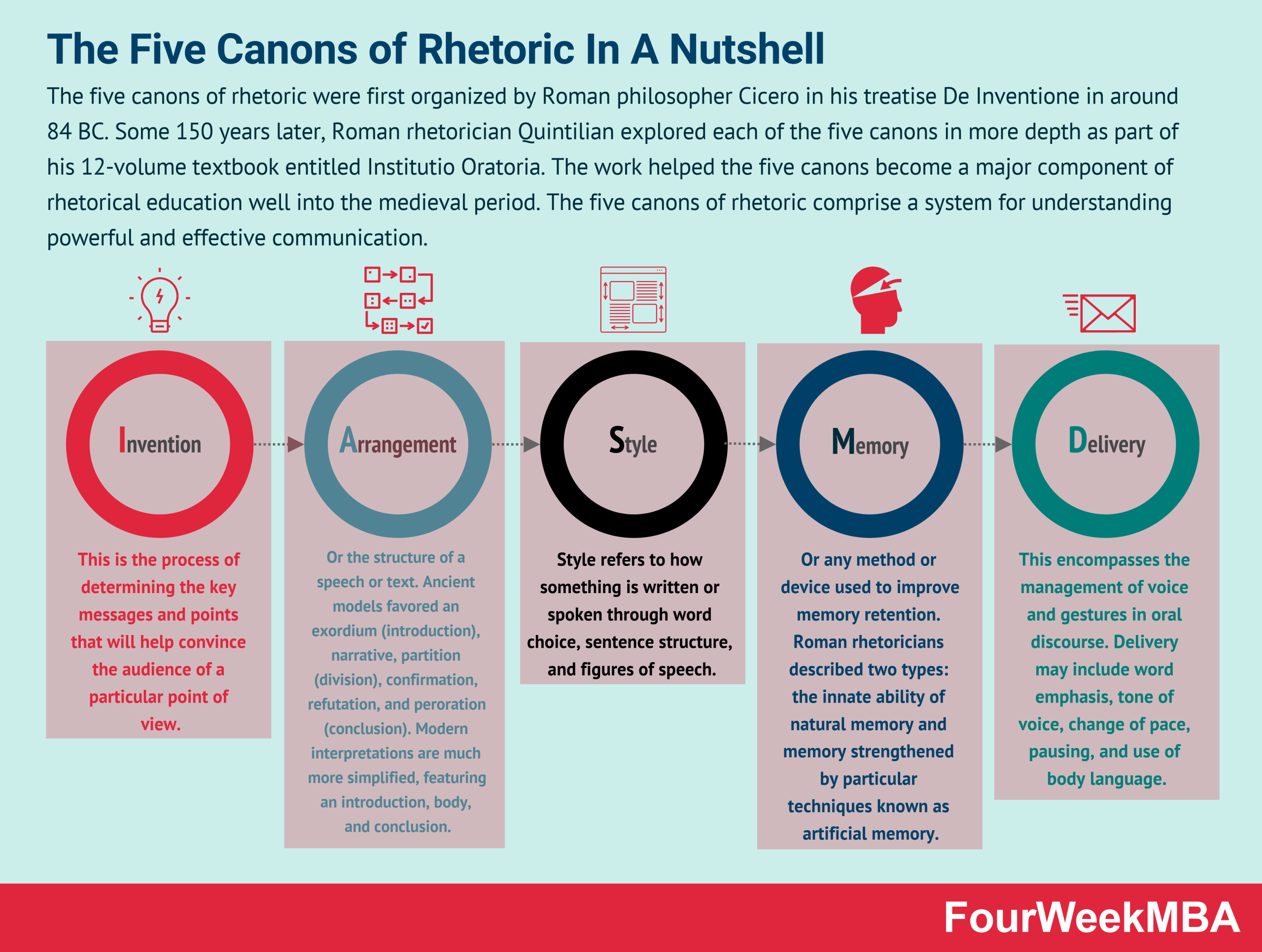 Understanding the five canons of rhetoric

A modern interpretation of the concept is perhaps best provided by speech communication professor Gerald M. Phillips: “The classical canons of rhetoric specify the components of the communication act: inventing and arranging ideas, choosing and delivering clusters of words, and maintaining in memory a storehouse of ideas and repertoire of behaviors… This breakdown is not as facile as it looks. The canons have stood the test of time. They represent a legitimate taxonomy of processes. Instructors [in our own time] can situate their pedagogical strategies in each of the canons.”

The five canons of rhetoric

Before explaining the five canons in detail, it’s important to first define a canon as simply a tenet of rhetoric. Although each canon was created in the context of public speaking, most can be applied to the writing and drafting phases of written communication.

Here is a look at each:

This is the process of determining the key messages and points that will help convince the audience of a particular point of view. Cicero defined this process as the “discovery of valid or seemingly valid arguments to render one’s cause probable.” This requires clarity of purpose and a deep understanding of the subject matter and audience. Equally as important are the presentation style, medium, and length.

Or the structure of a speech or text. Ancient models favored an exordium (introduction), narrative, partition (division), confirmation, refutation, and peroration (conclusion). Modern interpretations are much more simplified, featuring an introduction, body, and conclusion.

Style refers to how something is written or spoken through word choice, sentence structure, and figures of speech. The goal here is to elicit an emotional response through emotive language and rhetorical strategies including analogy, alliteration, and allusion.

Or any method or device used to improve memory retention. Roman rhetoricians described two types: the innate ability of natural memory and memory strengthened by particular techniques known as artificial memory. In ancient times, the fourth canon encouraged orators to memorize a speech in its entirety. Today, however, this approach is considered too formulaic and may cause a somewhat robotic speaking style. Memory should instead refer to the orator’s ability to improvise or answer questions on the spot, backed by deep knowledge of the subject matter.

This encompasses the management of voice and gestures in oral discourse. Delivery may include word emphasis, tone of voice, change of pace, pausing, and use of body language. Cicero saw delivery as crucial to good oration, defining it as “the sole and supreme power in oratory; without it, a speaker of the highest mental capacity can be held in no esteem; while one of moderate abilities, with this qualification, may surpass even those of the highest talent.”