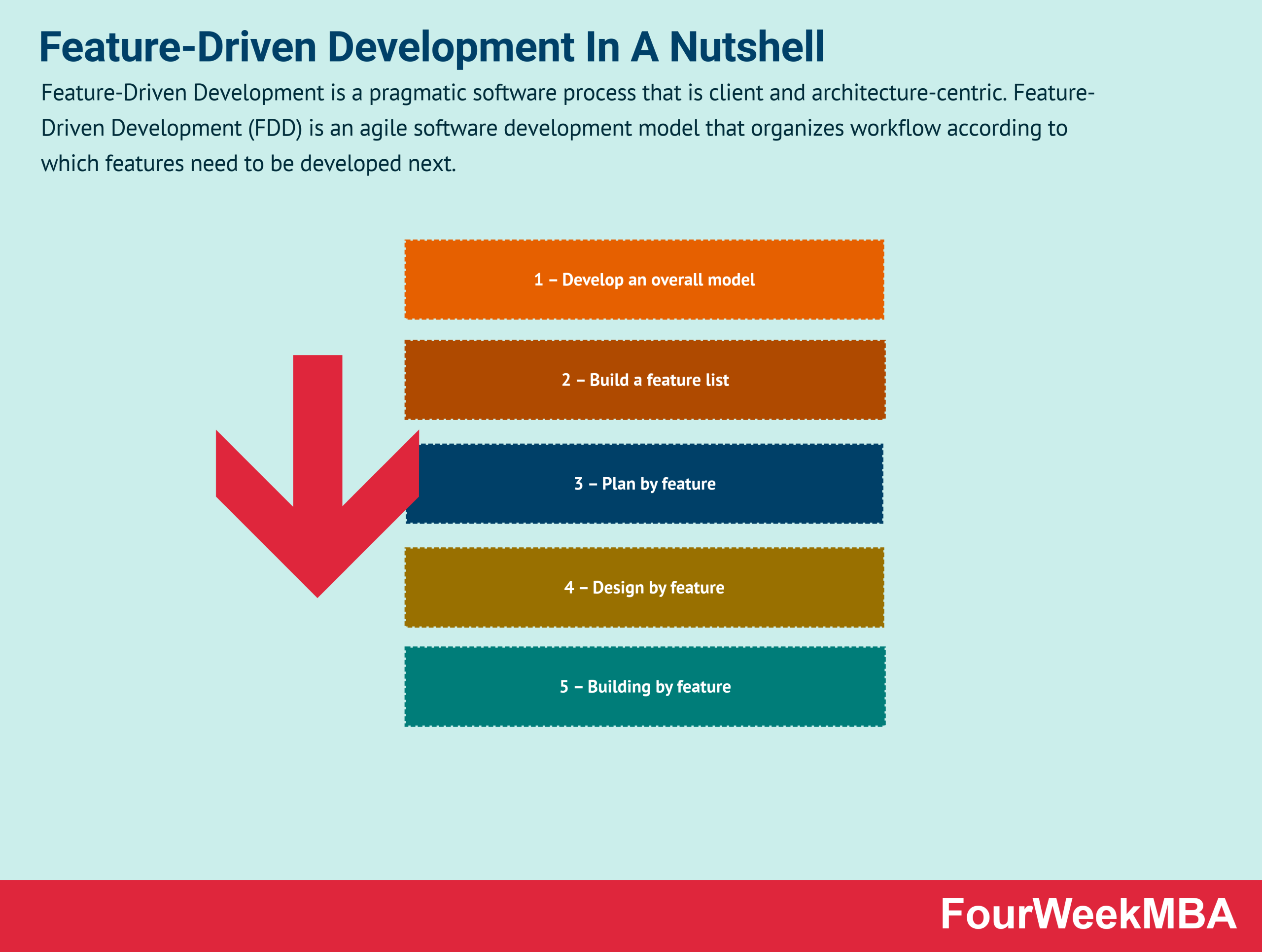 Feature-Driven Development is client and architecture-centric where the term “client” equates to the project stakeholders of Agile Modeling (AM) and the customers of eXtreme Programming (XP). The model was created in 1997 by Jeff De Luca, who used FDD principles in a 15-month software development project for a Singaporean bank.

As the name suggests, features are an integral facet of FDD. However, features are not confined to the commonly associated attributes of products or services. Instead, features in the context of FDD are more closely related to the user stories of Scrum.

Examples of such features include:

The five stages of Feature-Driven Development

While Scrum and XP advocate an iterative approach to software development, FDD requires project teams to follow a suite of engineering best practices.

Following is a look at each of the five stages of activity that incorporate these practices.

Initially, project team members must collaborate to propose a model for the domain area. It’s important to focus on the shape and scope of the model. It should capture the vision of the product but not contain any detailed or specific content.

Teams may choose to focus on the target audience, context, mission, and content structure. They may also form preliminary thoughts around UX and UI.

As we have noted, features in the FDD methodology tend to be small pieces of client-valued functionality as opposed to specific product features.

Next, prioritize the list of features and assign each to a two-week timebox of work called an iteration.

Where possible, plan a whole feature group for a specific iteration and then assign the development and testing activities for that iteration according to the feature.

In the fourth stage, it is finally time to begin designing collaboratively. Here, the chief programmer should select the features to be developed while also identifying the domain classes.

Detailed sequence diagrams for each feature should also be developed to refine the model.

The final stage involves pulling everything together and sending a feature prototype to QA for testing. If successful, the completed version can be added to the main product and the project team can move to the next feature.

Some of the more noteworthy advantages of FDD include:

While feature-driven development is a great starting point to speed up the development process by simplifying complex projects and reducing their complexity, it can also have major drawbacks. A company might lose sight of its customers and instead only think in terms of features. Indeed, a good product should always start with the customer in mind. Therefore, a feature-driven development approach combined with other frameworks like user journeys and customer mapping experience might help make the whole development process much better.