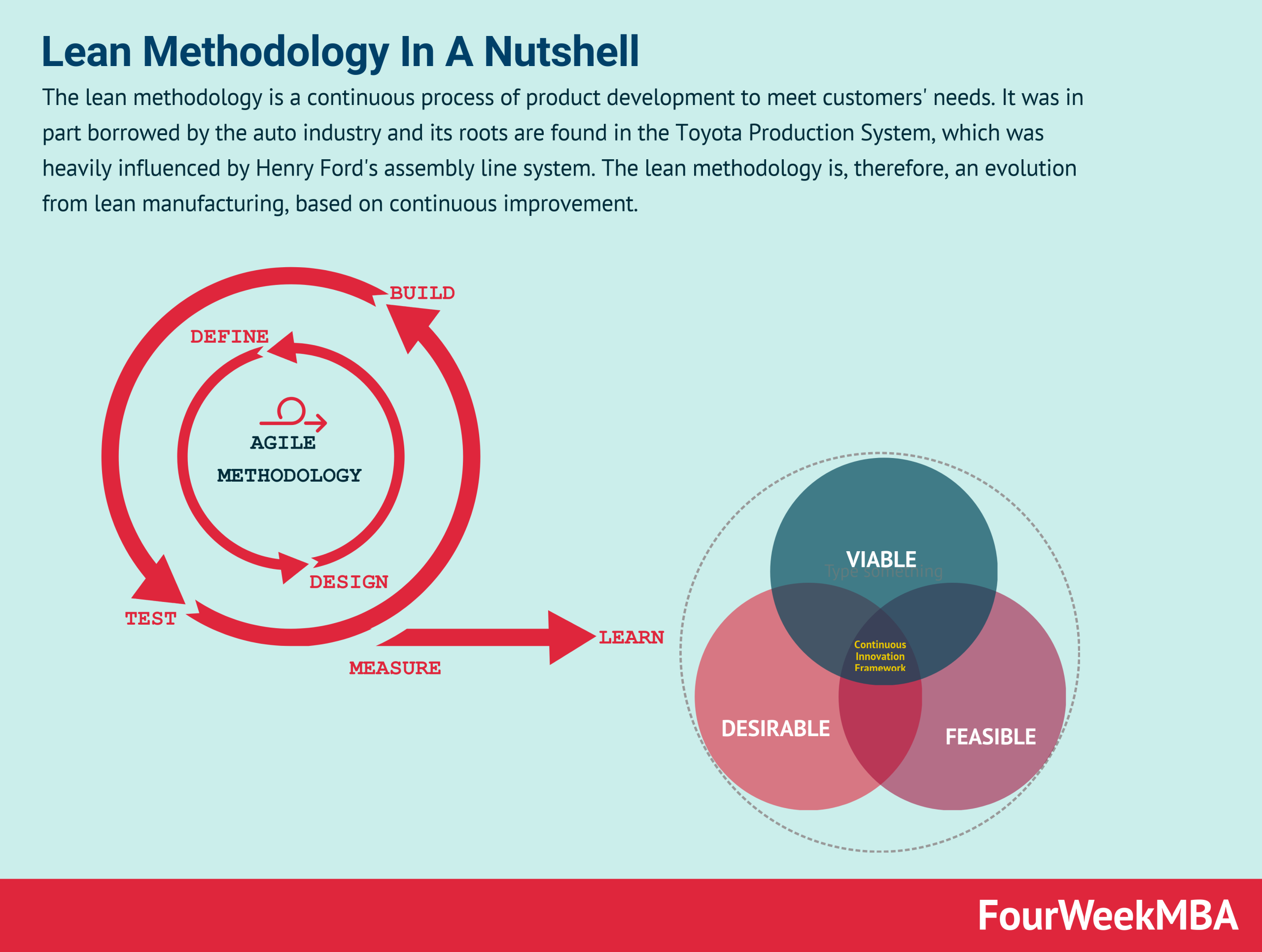 The lean methodology is a continuous process of product development to meet customers’ needs. It was in part borrowed by the auto industry and its roots are found in the Toyota Production System, which was heavily influenced by Henry Ford’s assembly line system. The lean methodology is, therefore, an evolution from lean manufacturing, based on continuous improvement.

A look into Kaizen and the roots of the Lean Methodology

Kaizen is actually a process that developed out of the auto industry. Its most infamous roots are found in the Toyota Production System, which was heavily influenced by Henry Ford’s assembly line system.

In the 1930s a team from the Toyota Motor Company visited Henry Ford’s plant. At the time, Toyota was producing just 40 automobiles per day, while Ford was producing 8,000.

Toyota decided to implement many of Ford’s techniques, but a visit by one of the lead engineers to the local Piggly-Wiggly gave him an inspiration which significantly advanced the basics of Ford’s system.

Kaizen didn’t gain international popularity, however, until the 1980s when a Japanese organizational theorist and management consultant named Masaaki Imai founded the Kaizen Institute Consulting Group to help introduce the concepts of Kaizen to western businesses.

In their book, Lean Thinking, James P. Womack, and Daniel T. Jones highlighted the key principles for lean thinking and the basis of the lean methodology. Lean Thinking, based on the study of the Toyota Production System, looked at five key guiding principles for process improvement, mainly focused on waste reduction: value, value streams, flow, pull and perfection.

They forged “The Agile Alliance,” as a group of independent thinkers about software development, which agreed on the Manifesto for Agile Software Development.

Steve Blank, launched the Lean Startup Movement, which as he explained in a 2013 HBR article “Why the Lean Start-Up Changes Everything:”

It’s a methodology called the “lean start-up,” and it favors experimentation over elaborate planning, customer feedback over intuition, and iterative design over traditional “big design up front” development.

Today startups take this methodology for granted. Yet at the time this was an innovation as Steve Blank recounted:

Although the methodology is just a few years old, its concepts—such as “minimum viable product” and “pivoting”—have quickly taken root in the start-up world, and business schools have already begun adapting their curricula to teach them.

Some of the key aspects fo the lean startup movement is based on using a “scientific method” and a process of creating, launching and growing a startup.

This focuses on getting insights as quickly as possible from customers without focusing too much on business planning. As Steve Blank remarked in his 2013 article:

A business plan is essentially a research exercise written in isolation at a desk before an entrepreneur has even begun to build a product. The assumption is that it’s possible to figure out most of the unknowns of a business in advance, before you raise money and actually execute the idea.

Once the money is raised:

Developers invest thousands of man-hours to get it ready for launch, with little if any customer input. Only after building and launching the product does the venture get substantial feedback from customers—when the sales force attempts to sell it. And too often, after months or even years of development, entrepreneurs learn the hard way that customers do not need or want most of the product’s features.

On the HBR article Steve Blank remarks the waste of time a five-year business plan represents:

No one besides venture capitalists and the late Soviet Union requires five-year plans to forecast complete unknowns. These plans are generally fiction, and dreaming them up is almost always a waste of time.

Start-ups are not smaller versions of large companies

One of the critical differences is that while existing companies execute a business model, start-ups look for one

This point is critical because of a large organization or existing companies operating with known business models.

It is crucial to emphasize the fact that the business model needs to be repeatable and scalable.

Toward Continuous Innovation In Business

Agile Methodology In A Nutshell

Agile started as a lightweight development method compared to heavyweight software development, which is the core paradigm of the previous...