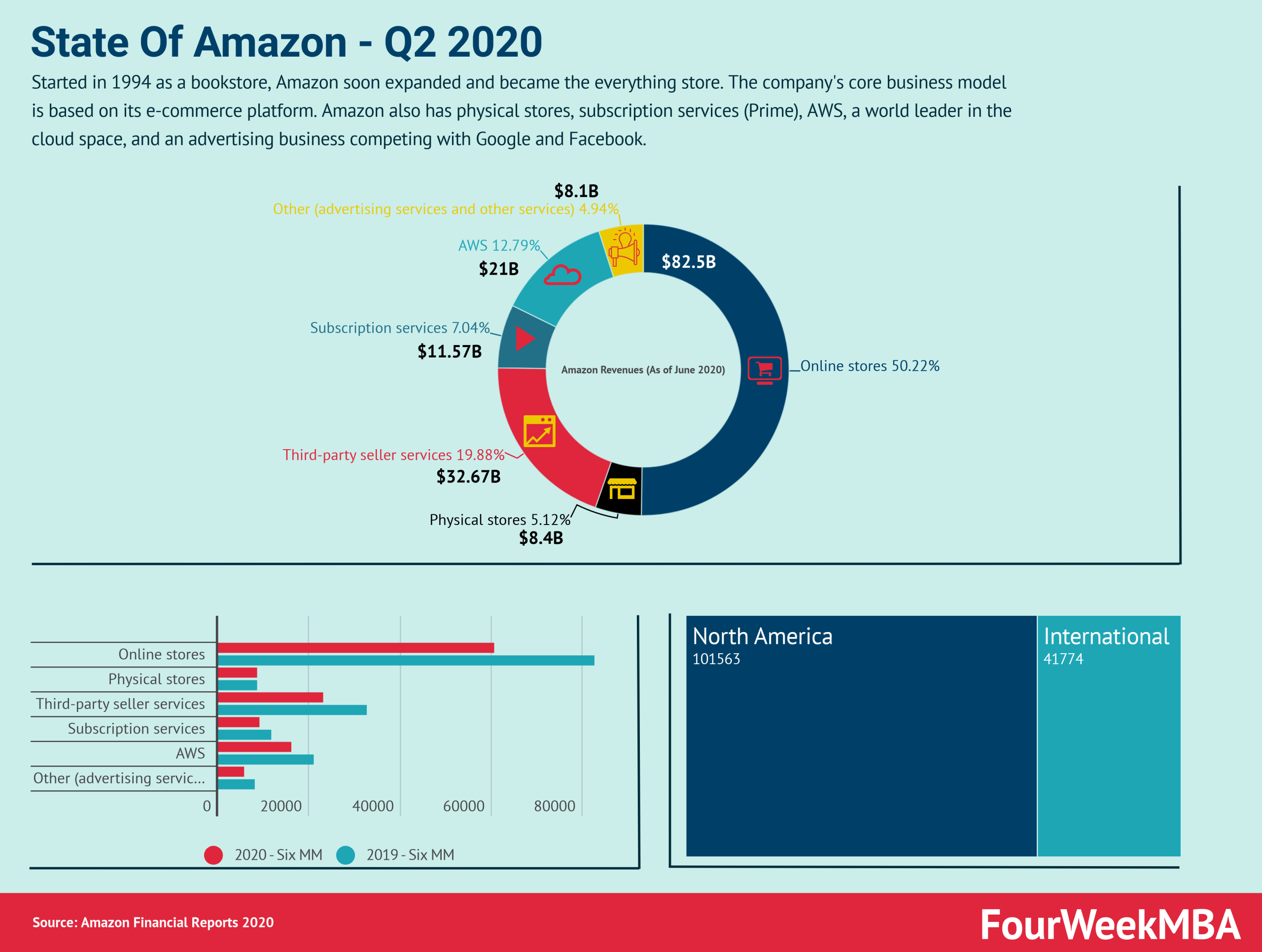 While organization" itemid="http://data.wordlift.io/wl0166/post/how_amazon_makes_money__amazon_business_model_in_a_nutshell">Amazon is primarily a consumer e-commerce platform, its tentacles move in many directions:

The starting point of organization" itemid="http://data.wordlift.io/wl0166/post/how_amazon_makes_money__amazon_business_model_in_a_nutshell">Amazon success is its e-commerce consumer platform, which products are broken down into:

On top of the core consumer e-commerce platform, the whole Amazon business model has been developed over the years. In fact, for Amazon third-parties sellers that host their products on Amazon, they can further benefit from:

As a natural line of business for Amazon, advertising enabled those third-party sellers to gain more visibility on the platform. Therefore the other revenue stream is:

Amazon vs. Google traffic comparison, by SimilarWeb – May 2020. Where Amazon is still small compared to Google in terms of total traffic. Most of the traffic on the platform has a high commercial value (meaning people look for products, not information). That means organization" itemid="http://data.wordlift.io/wl0166/post/how_amazon_makes_money__amazon_business_model_in_a_nutshell">Amazon still has a lot of space to grow and get more of the digital advertising cake, which is Google’s primary business model.

Among the many trials and errors Amazon also developed a successful program, called Amazon Prime, which turned out to be a great wat for Amazon to increase repeat business:

As a result of the pandemic all the segments of Amazon grew substantially (only exceptions were physical stores, which comprises Whole Foods).

Online store growth also drove the growth of third-party seller services, subscription services, and AWS. Those segments (subscriptions and AWS) also moved independently from the other segments, as Amazon has successfully developed a diversified business model.

Amazon‘s ability to unlock substantial cash from operations is a key characteristic from its business model.

Amazon runs at positive cash conversion cycles, which makes it possible for the company to generate massive amounts of cash, nonetheless its tighter margins, from the e-commerce platform, compared to other segments like AWS.

Perhaps, by June 2020, Amazon recorded over $23 billion in operating cash flows as of June 2020. This result was driven by cash received from consumers (credit card purchases on Amazon.com), sellers (money earned via third-party services and revenue-split), developers (for Amazon AWS), enterprises (AWS) , and content creator customers, and advertisers.

To understand how Amazon generates cash from operations quickly, that’s Because consumers primarily use credit cards to buy from Amazon, therefore receivables from consumers settle quickly.

In short, Amazon is pretty good in managing its working capital, affected by:

Therefore, by quickly turning its inventory into sales, by enabling third-party sellers to easily list on Amazon, thus making more products available on the platform; by collecting credit cards payments from customers; and by paying sellers on the platform at longer intervals (like 60-90 days); Amazon is able to move substantial cash flows, that it quickly invests back in expanding the business, making it more efficient, thus prompting further its flywheel.

For instance, as Amazon recorded a cash inflow for the first six months of 2020, it reinvested it (that is why you have negative investing cash flows) in additional capacity to support its fulfillment operations and in support of continued business growth in technology infrastructure (the majority of which is to support AWS).