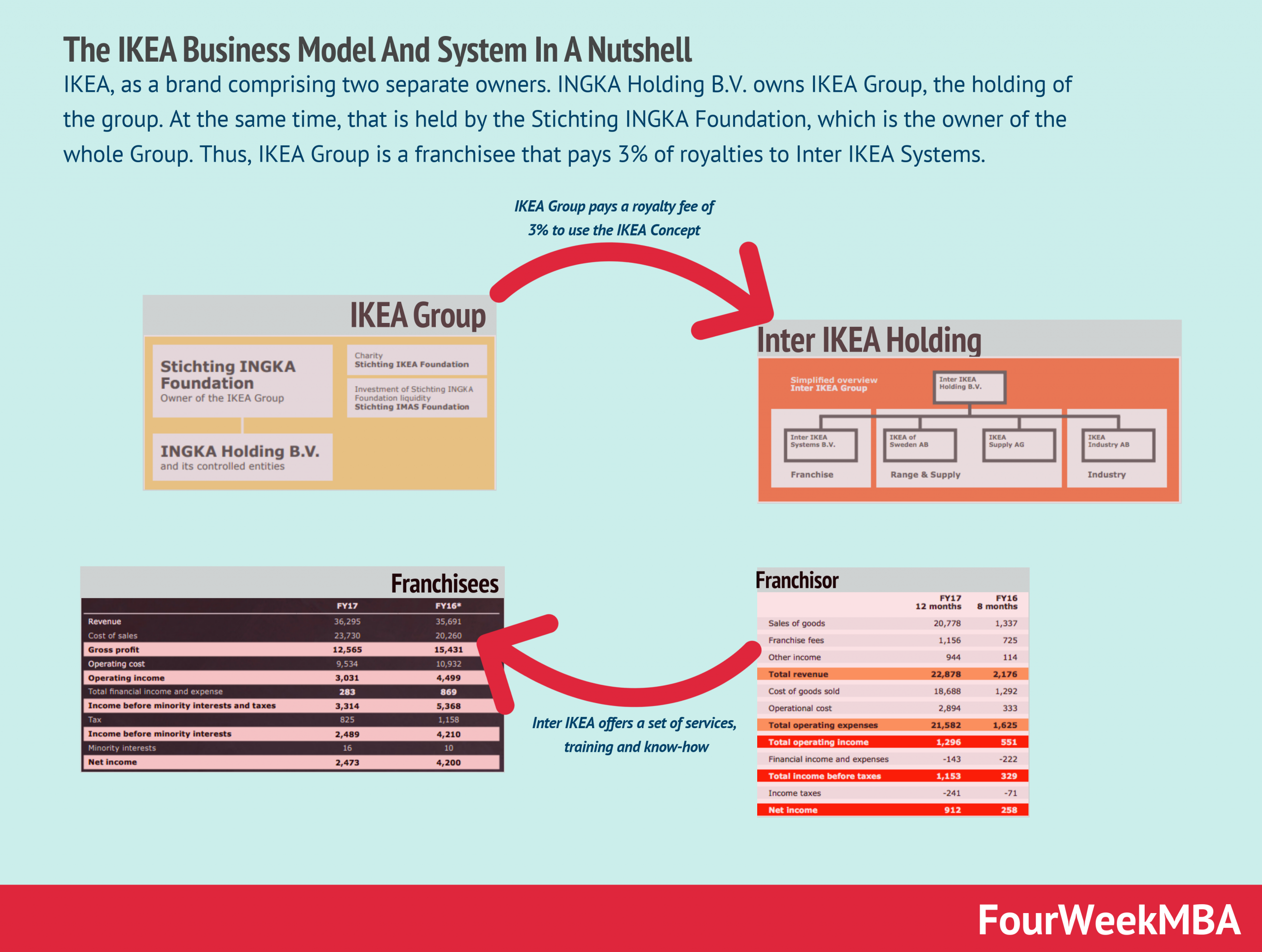 IKEA, as a brand comprising two separate owners. INGKA Holding B.V. owns IKEA Group, the holding of the group. At the same time, that is held by the Stichting INGKA Foundation, which is the owner of the whole Group. Thus, IKEA Group is a franchisee that pays 3% royalties to Inter IKEA Systems.

IKEA’s organizational structure might sound a bit confusing at first, but I looked into it to see how its business model works so that you could gain clarity on that.

The IKEA organization is peculiar. While many believe that IKEA as a concept and IKEA as a store are owned, operated, and run by the same people. In reality, the organization of this company is way more complicated.

At this stage, it is critical to making a distinction between two entities: IKEA Group run by INGKA Holding B.V. and the IKEA worldwide franchisor, run by Inter IKEA Systems B.V.

While the IKEA Group takes care of the centers, retails, customer fulfillment, and all the other services related to IKEA products.

Inter IKEA Systems B.V., which is the owner of the IKEA Concept, and the worldwide franchisor of IKEA stores take care of the processes, distribution of products, training of its staff, and other related activities in line with the franchising agreements.

Inter IKEA and IKEA Group have separate owners and logic of business:

The INGKA Holding B.V. is the holding of the group. At the same time, this is owned by the Stichting INGKA Foundation, which is the owner of IKEA Group. As a foundation, the profits generated from IKEA activities can be used in two ways: either reinvested in the IKEA Group or they can be donated for charitable purposes through the foundation.

The foundation is based in the Netherlands. The image below explains quite well how the IKEA Group is organized:

Around the globe, a large number of companies operate under the IKEA trademarks. All IKEA franchisees are independent of Inter IKEA Group. A large group of franchisees are owned and operated by INGKA Group. Inter IKEA Group and INGKA Group have the same founder, and a common history and heritage, but have operated under different owners and management since the 1980s.

The ownership changes came into effect on 31 August 2016. Once again, I want to remark that The Inter IKEA Group structure, is now composed of three core businesses:

What is the IKEA Group business model?

The IKEA Group business model is a franchisee that pays a 3% fee to Inter IKEA Systems B.V. that acts as a franchisor. As of September 2017, the company recorded over €36 billion in revenues, €3 billion in operating income, and almost €2.5 billion in net income.

At geographical level Europe, with Germany brings in 15% of the revenues, while US 14%.

What is the Inter IKEA Systems business model?

Inter IKEA Systems B.V. follows a franchising business model. In fact, the stores are operated via franchising agreements that will pay a 3% franchise fee. On the other hand, the franchisees (the stores paying the fee to Inter IKEA Systems) have in exchange the right to operate the stores under the IKEA concept and IKEA brand. Thus, they gain access to systems, methods, and procedures that go from staff training, manuals, store layouts, display concepts and so on.

The source of revenues for this group is given by three main operating segments:

As reported on Inter IKEA website “The acquisition (of IKEA of Sweden AB, IKEA Supply AG and IKEA Industry AB—and their related businesses, which was completed on 31 August 2016) has had a substantial positive impact on the result.”

From the Inter IKEA Group Financial Summary for 2017, it is interesting to look at the simplified overview of its franchise system:

The whole franchise system consists of:

The IKEA Franchise System in A Nutshell

As the IKEA business was expanding in the early 1980s, IKEA founder, Ingvar Kamprad, realised that he needed to protect the IKEA Concept. After a long search, Ingvar decided that a franchise system would be the best choice for IKEA. It would allow for international expansion while protecting the underlying concept and stimulating an entrepreneurial spirit. Inter IKEA Systems B.V. is the IKEA franchisor who continuously develops the IKEA Concept and ensures its implementation in all markets. IKEA franchisees run the day-to-day retail business and pay a franchise fee. Together, the companies in the franchise system develop and improve how people discover and interact with IKEA and IKEA products. Inter IKEA Systems B.V. has assigned other IKEA companies to develop the range, supply and communication. IKEA of Sweden AB develops the IKEA home furnishing product range, IKEA Food Services AB develops the IKEA Food & Beverages product range, IKEA Supply AG manages purchasing and distribution and IKEA Communications AB produces IKEA communication. The diagram below shows a simplified overview of the IKEA franchise system. Inter IKEA Systems B.V., IKEA of Sweden AB, IKEA Food Services AB, IKEA Supply AG and IKEA Communications AB are companies within the Inter IKEA Group. Inter IKEA Group also includes other companies like IKEA Industry AB. The IKEA franchise system is people-oriented and encourages everyone to contribute. It forms an interdependent framework and lays a solid foundation for the IKEA Brand while enabling a scalable and dynamic value chain. Last, but not least, it answers Ingvar Kamprad’s three desired intentions: allowing and encouraging IKEA to remain entrepreneurial; enabling international growth; and keeping the IKEA Concept strong and consistent.