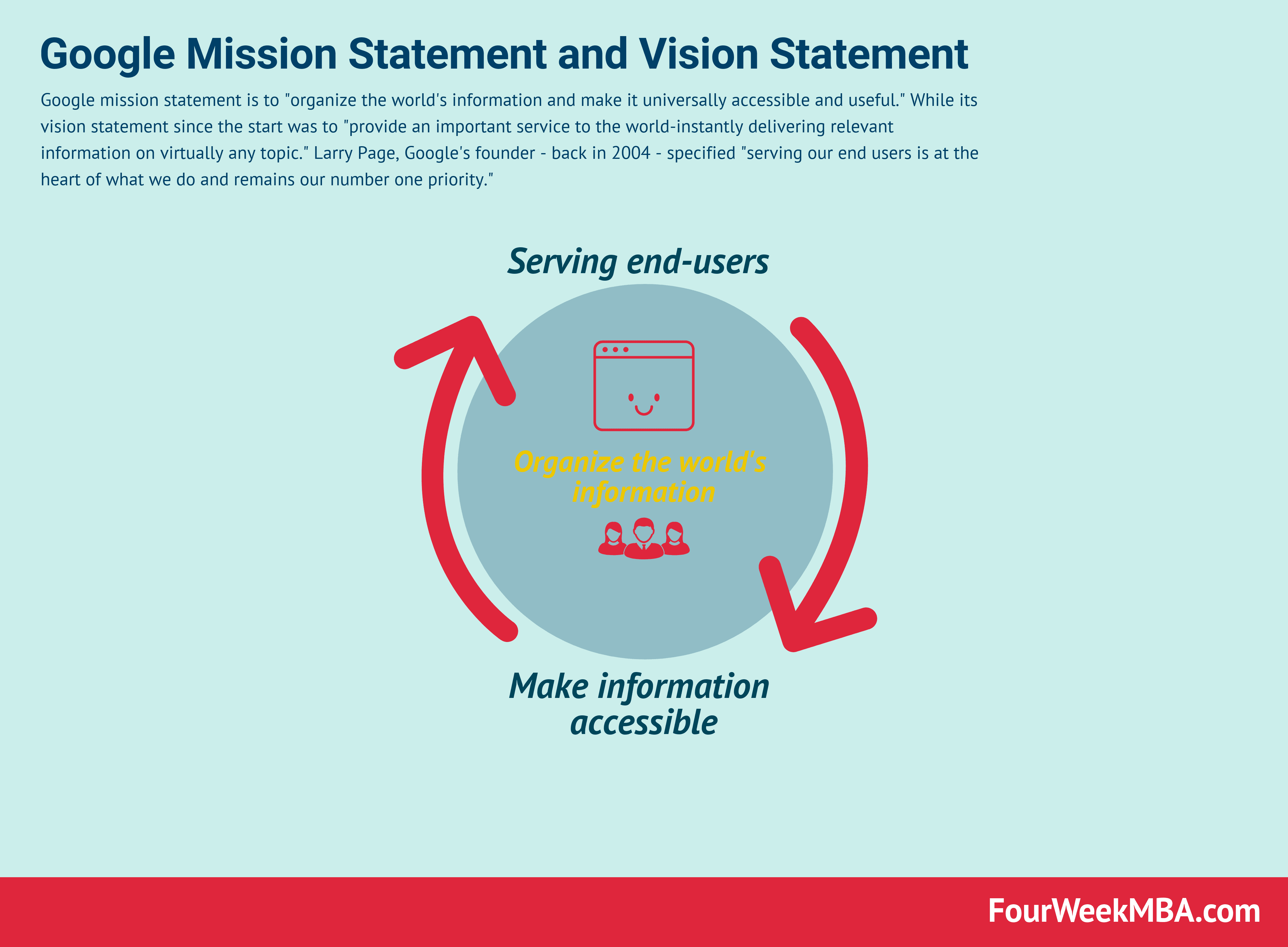 Both the mission and vision statement informs Google’s overall business strategy, and we’re going to break them down to dissect the core elements of the company.

Google‘s mission is to “organize the world’s information and make it universally accessible and useful.”

Having clarified that we can look at the core of the Google business model. Google highlights four key concepts of its mission:

Google “organizes” the “information.” Google doesn’t create content. Indeed, Google assembles billion web pages and return an accurate result in a matter of milliseconds. That information is “universally accessible” as Google is free and available to billion of users each day.

When the information served is useful (relevant) that’s when that information becomes knowledge. If you didn’t get it yet, Google has been so far a media company, and its corporate structure reflects that. Indeed, it has a dual-class stock structure which reflects the structure of other media companies like The New York Times.

It is a free tool for users, but a paid tool for businesses. It is an amplification and distribution channel for publishers (Google organic traffic is as of 2019 the channel that still brings the most traffic to websites all over the world).

And a free tool for publishers and content producers. Indeed, tools like Google Analytics, Google Search Console and Google Trends help publishers analyze the content that is more searched by users, by limiting their risk of producing content that isn’t relevant.

Google is changing at a fast pace and as AI grows and the search engine can put together content on its own (by scraping content from websites to offer direct answers or by feeding it to its AI algorithms) publishers are becoming less relevant.

Therefore from the three key players:

There is one player that wins over the others: users. In short, Google knows that as soon as its search engine is extremely valuable to its users, then it will be so also for publishers and advertisers.

That doesn’t mean Google always defends users’ interests. Indeed, one of the recurring polemic around Google practices in collecting massive users’ data even though it might not use it “yet.”

To understand why users always come first for Google, we need to look at Google‘s vision!

Google’s Founders in the IPO letter of 2004, started with:

Google is not a conventional company. We do not intend to become one. Throughout Google’s evolution as a privately held company, we have managed Google differently. We have also emphasized an atmosphere of creativity and challenge, which has helped us provide unbiased, accurate and free access to information for those who rely on us around the world.

That is also the reason Google has picked dual-class stocks corporate structure, where Bring and Page maintained control over the company while instituting several boards of directors to make other important decisions.

As highlighted in the Alphabet annual report for 2018:

Many companies get comfortable doing what they have always done, making only incremental changes. This incrementalism leads to irrelevance over time, especially in technology, where change tends to be revolutionary, not evolutionary. People thought we were crazy when we acquiredYouTubeand Android and when we launched Chrome, but those efforts have matured into major platforms for digital video and mobile devices and a safer, popular browser. We continue to look toward the future and continue to invest for the long-term. As we said in the original founders’ letter, we will not shy away from high-risk, high-reward projects that we believe in because they are the key to our long-term success.

This point is critical as Google is a company that doesn’t think incrementally. Indeed, the 10X better has been its paradigm since the start, and that is also why Google has been using a Moonshot Thinking also to bet in other areas, that have nothing to do with the search:

Sergey and I founded Google because we believed we could provide an important service to the world-instantly delivering relevant information on virtually any topic. Serving our end users is at the heart of what we do and remains our number one priority.

To notice that Page specified “serving our end users is at the heard at what we do and remains our number one priority.”

If you do understand that, then you can grasp why Google (the search engine) “behaves” the way it does!

Google wants to provide users what it thinks is “quality and relevant content.”

Let’s start via negativa by defining low-quality content according to Google:

Low quality pages may have been intended to serve a beneficial purpose. However, Low quality pages do not achieve their purpose well because they are lacking in an important dimension, such as having an unsatisfying amount of MC, or because the creator of the MC lacks expertise for the purpose of the page.

MC stands for the main content, “which is determined by how much time, effort, expertise and talent/skill have gone into the creation of the page and also informs the E-A-T of the page.”

Google also points out that a user-friendly content should:

Don’t fill your page with lists of keywords, attempt to “cloak” pages, or put up “crawler only” pages. If your site contains pages, links, or text that you don’t intend visitors to see, Google considers those links and pages deceptive and may ignore your site.

Today hundreds of millions of websites are adapting their content guidelines to Google’s definition of quality content to be up to date to Google’s changes! That is what happens when a company scales up at the point of influencing billions of stakeholders worldwide!

Thus, when we think of Google (the search engine) moving in a particular direction, we have to ask, “will this benefit users?”

For instance, in the publishing world, or in other industries where Google might have a massive impact, the companies involved start to ask “whether this is good for them” and complain about Google taking over a specific industry. However, they are pondering the wrong question.

At the annual conference Google holds each year, the Google I/O for 2019, its CEO, Sundar Pichai highlighted that Google’s mission stays the same, and now more than ever its mission is strong.

However, he highlighted how the way Google approaches its mission has changed. Indeed, Google is moving more and more from “access of information and knowledge” to allow you “to get things done!”

The switch and change in its approach are critical to understanding as Google will be developing tools that control a larger part of the users’ experience. This becomes clear with tools like Google Duplex and AI applied to search and voice.

LinkedIn is a two-sided platform running on a freemium model, where to unlock unlimited search and other features, you need...