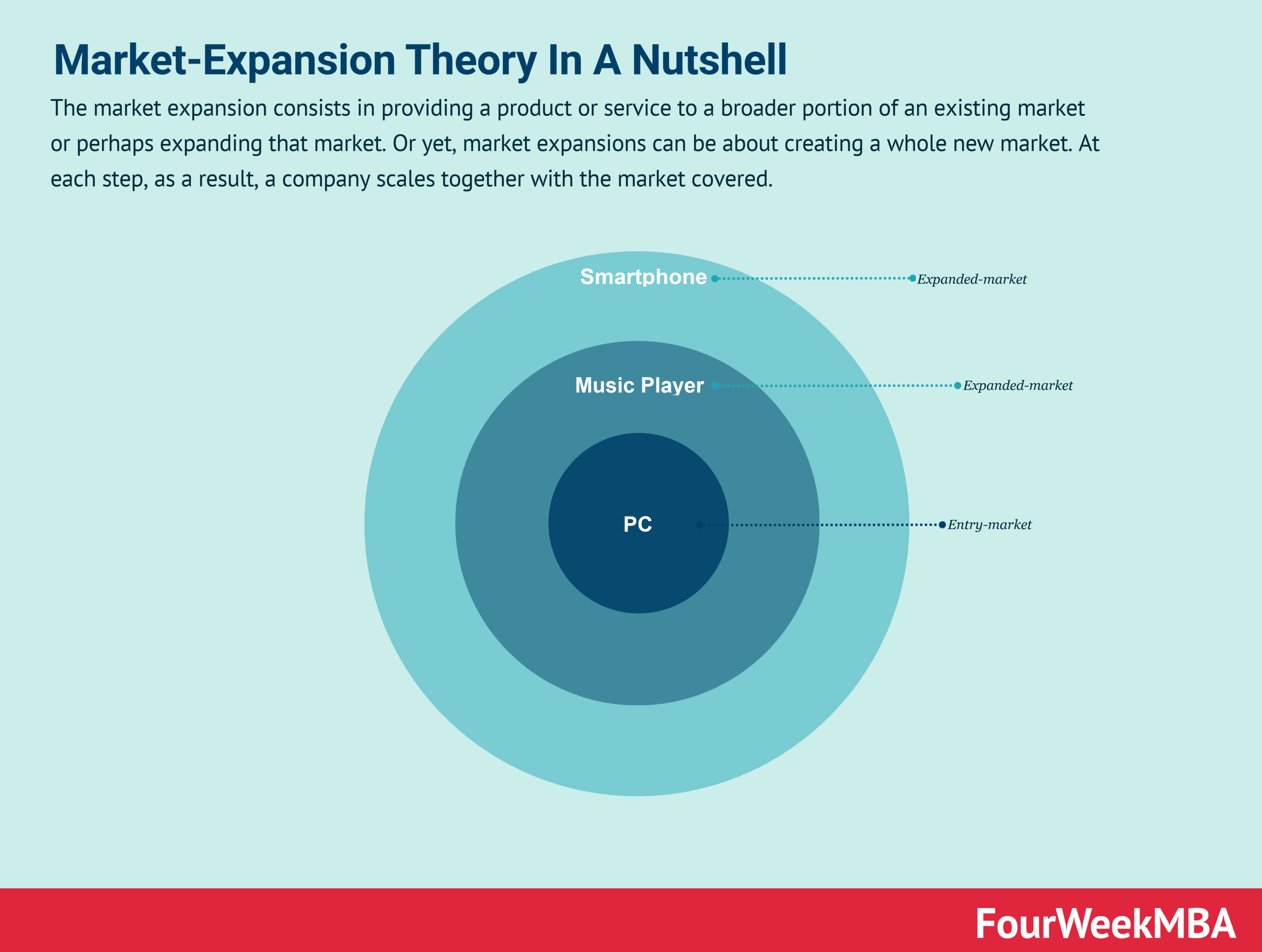 The market expansion consists in providing a product or service to a broader portion of an existing market or perhaps expanding that market. Or yet, market expansions can be about creating a whole new market. At each step, as a result, a company scales together with the market covered.

The mother of the modern market expansion

One of the most successful market expansion of modern business history was achieved by Apple. As the company moved from niche PC maker; it jumped to new markets, until it created a whole new market with its iPhone (what is known as a blue ocean, or at least it used to be so).

As Apple created new products, those new products also comprised new technologies, and they were coupled with a different distribution model.

When Apple jumped from computers to the iPod, it started to understand that to create a whole new market, a product alone wasn’t enough.

It needed a new way to distribute it and a new platform for enabling a different level of content consumption for consumers.

Netflix started as a DVD-rental company. That was the most viable way to start a business that could compete with existing players like Blockbuster. Netflix could have tried to play it bigger.

Netflix had known for years that being a competitive player in the DVD-rental space, was “just the beginning of something else:”

The dream 20 years from now, is to have a global entertainment distribution company that provides a unique channel for film producers and studios.

Thus, Reed Hastings was well aware of the potential of building a platform, yet it knew it took time to achieve the viability of that business model. Netflix could have burned all its capital to enter that market early on.

Yet the first time “streaming” was announced on a Netflix financial statement was in the 2007 annual report, presented in 2008, and by 2009 annual report streaming would be mentioned 88 times (FourWeekMBA analysis). That is when things started to pick up!

And suddenly Netflix jumped from a limited market to an unlimited, digital market, without physical constraints, besides servers’ costs, of course. In 2019 server expenses increased by $18 million as more streaming was served on the platform (FourWeekMBA Analysis). And yet, this model was way more scalable.

Other examples that we’re looking at currently, are all around us. Another interesting one is Uber and how – as the company scales – it explores new ways it can achieve its mission, and yet be careful not to take this step too fast, as a false step might certain business death.

Technological platforms mature with the birth of an economic ecosystem around them. Conversely, “business platforms” require technological, distribution, and monetization changes, that combined provide a new way of doing business, and the basis for new business models to emerge.

Logical only in hindsight

While it all makes sense to look at market expansion in this way, it’s important to understand that this is logical only in hindsight. In reality, as companies go through those periods of market changes, they need to adjust.

For instance, as Netflix survived two eras of changed content distribution formats, the survival is all but granted.

And in the next era, where augmented reality might become the next available consumer-platform, the whole TDM framework might change again!

How OYO Works: OYO Business Model In A Nutshell

OYO business model is a mixture of platform and brand, where the company started primarily as an aggregator of homes...