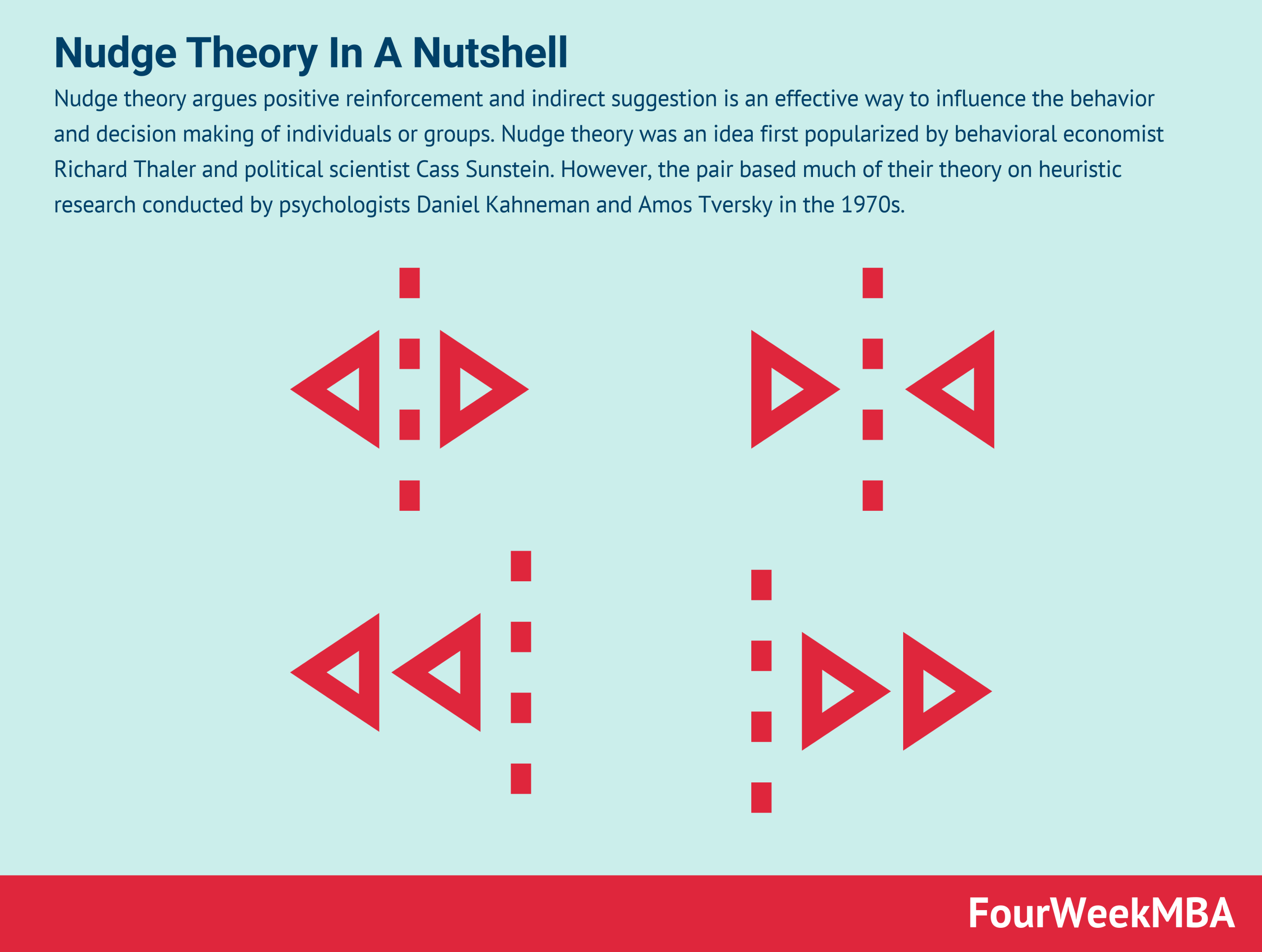 Nudge theory argues positive reinforcement and indirect suggestion is an effective way to influence the behavior and decision making of individuals or groups. Nudge theory was an idea first popularized by behavioral economist Richard Thaler and political scientist Cass Sunstein. However, the pair based much of their theory on heuristic research conducted by psychologists Daniel Kahneman and Amos Tversky in the 1970s.

In their subsequent 2008 book about health and wealth-based decision making, Thaler and Sunstein defined a nudge as “any aspect of the choice architecture that alters people’s behavior in a predictable way without forbidding any options or significantly changing their economic incentives. To count as a mere nudge, the intervention must be easy and cheap to avoid. Nudges are not mandates. Putting the fruit at eye level counts as a nudge. Banning junk food does not.”

Nudge theory was initially developed as an ethical construct designed to improve societies. However, it is now used in any situation where an individual or group seeks to influence other individuals or groups. Although it has obvious implications for consumer psychology, the theory can also be used in the parenting of a child or the management of global populations.

Central to nudge theory is the idea that one can influence the likelihood of an individual choosing one option over another by shaping their environment. This environment is also known as choice architecture, which describes the various ways choices are presented and how they impact decision-making. Here, the theory suggests an individual can be helped to think appropriately and make better decisions by being offered choices designed to enable those outcomes.

Although nudge theory is used to push an individual toward a desired outcome, they must maintain freedom of choice and feel in control of the decision-making process. This style contrasts with more traditional means of instituting change, where instruction, enforcement, or even punishment are used to coerce people to do something against their will.

To that end, nudge theory is much more effective in altering behavior because it encourages positive choices over restricting undesirable behavior with sanctions. What’s more, nudge theory respects that each individual is comprised of certain attitudes, knowledge, and capabilities that influence their behavior.

Consider the following differences between traditional (enforced) change and nudge theory techniques to put the above into perspective:

Examples of nudge theory in action

One of the archetypal examples of nudge theory in action can be seen in Amsterdam’s Schiphol Airport. I

In the men’s bathrooms, an image of a housefly is displayed on each urinal to encourage travelers to improve their aim. This increases visual amenity and more importantly for the airport, reduces cleaning costs.

Other examples can be categorized according to three, broad nudge categories: