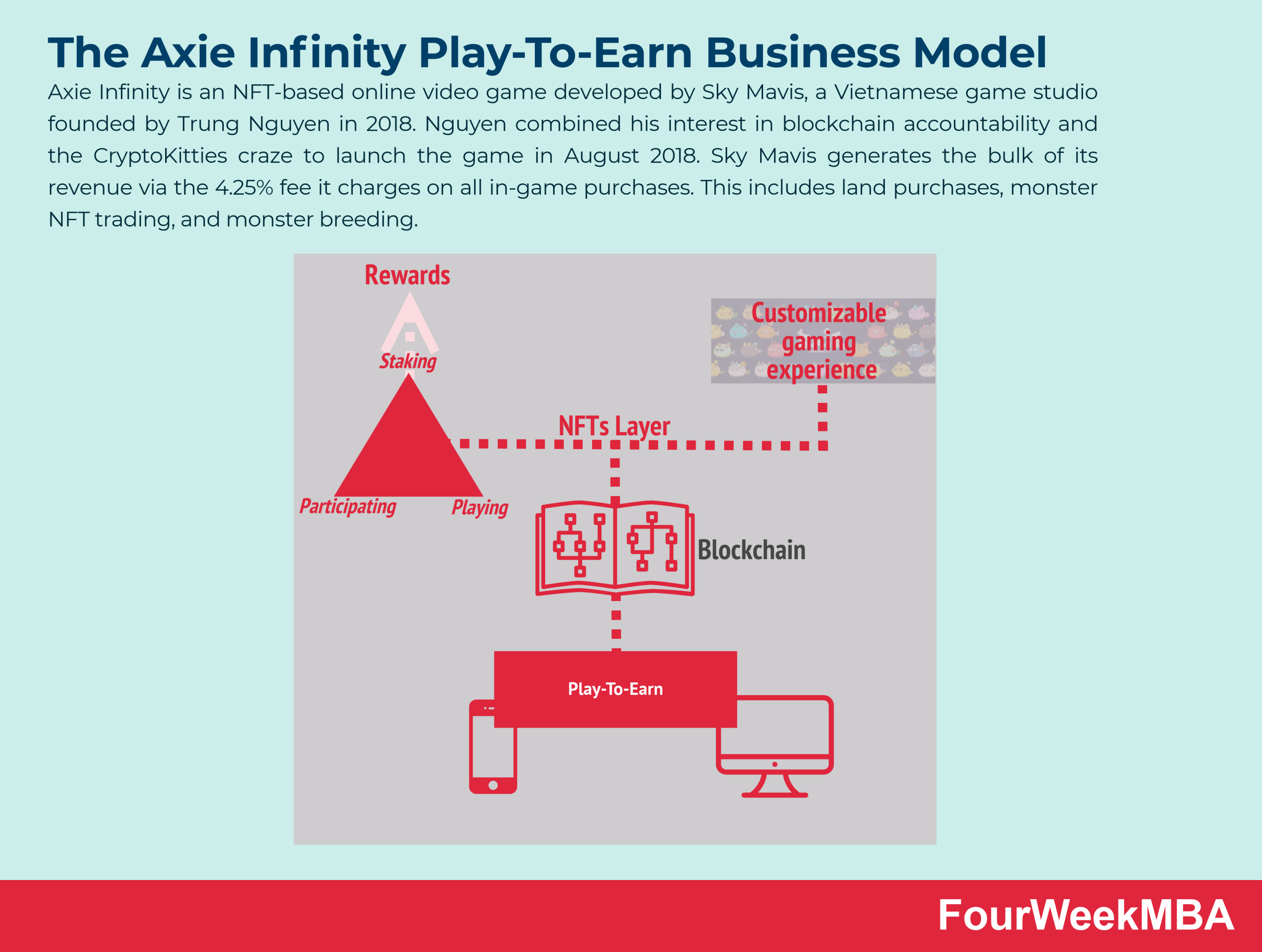 Axie Infinity is an NFT-based online video game developed by Sky Mavis, a Vietnamese game studio founded by Trung Nguyen in 2018. Nguyen combined his interest in blockchain accountability and the CryptoKitties craze to launch the game in August 2018. Sky Mavis generates the bulk of its revenue via the 4.25% fee it charges on all in-game purchases. This includes land purchases, monster NFT trading, and monster breeding. Axie Infinity requires that all new players purchase three monsters to get started. Since the cost can run into hundreds of dollars, Sky Mavis will lend players the monsters and collect a 30% interest fee once the player starts earning currency.

Before founding Sky Mavis, Nguyen had worked for the Silicon Valley-based Anduin Transactions, a platform that made investment deals faster, more efficient, and more transparent.

Nguyen had a particular interest in the accountability facilitated by the Anduin platform, which he linked with the burgeoning interest in blockchain in Vietnam. While others focused on Bitcoin and other cryptocurrencies, Nguyen recognized that blockchain technology could be used to build video games. He was particularly in the game CryptoKitties, where users could buy, sell, and breed unique virtual cats validated by the Ethereum blockchain.

Over the next few months, Nguyen developed his own blockchain-based game, combining the true ownership element of CryptoKitties with the competitive gameplay of the Pokémon series. The game, which he called Axie Infinity, featured fantasy creatures based on the axolotl, a Mexican salamander with the ability to regenerate limbs, gills, and parts of the eyes and brains. It was released in August 2018 and was an instant success.

In October 2021, total sales volume in the three years since launching amounted to $2.3 billion. The company also recently secured a further $152 million in Series B funding to build a distribution platform to help developers create blockchain-based games.

How does Axie Infinity work?

In Axie Infinity, every monster is a non-fungible token (NFT).

Players earn tokens by engaging in turn-based battles with other players or computer-controlled teams. These tokens are then used to “breed” new monsters by creating more NFTs.

Since the game is based on the Ethereum blockchain, each monster is recorded as a unique object and be tracked. This tells other game players that the creation of the monster took real and verifiable time and effort to create, which increases value.

The NFT-based monsters can also be traded in the game’s marketplace for real money.

Firstly, revenue comes from in-game purchases such as land and NFT monsters. The company takes 4.25% of the total price of each purchase. In February 2021, nine plots of land in Axie Infinity sold for approximately $1.5 million.

The company also earns money from breeding fees, which are collected when a player decides to create a new monster. Fees are payable in either SLP (Smooth Love Potion) or the game governance token AXS.

Note that Sky Mavis must share the breeding fee with the developers and owners of AXS.

New players to the game must first invest in three monsters, with the cheapest monsters costing around $200 each.

For players who cannot afford this upfront expense, the company will lend them the monsters. When they progress to the point of making and selling their own monsters, Sky Mavis will collect 30% interest.